Retired tennis No.1 Ash Barty lining up a shot at golf career? 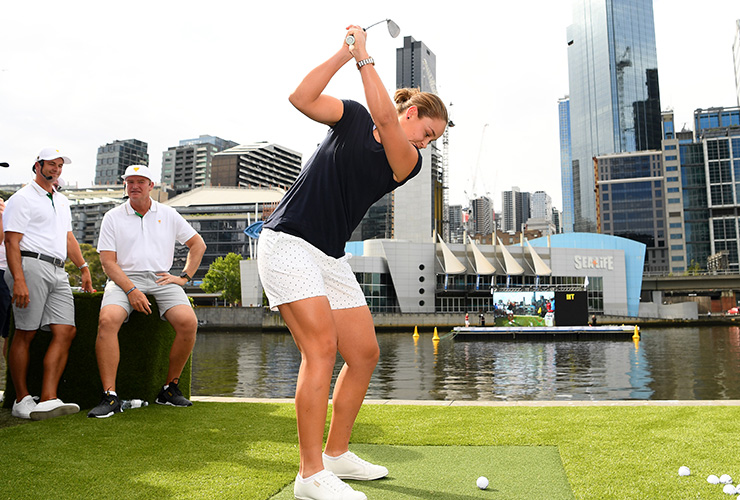 Ash Barty is no stranger to a golf course. Getty Images

By Matt Smith
Former tennis world No. 1 Ashleigh Barty may have stepped away from the game at the top, but it seems she is by no means done with the sporting world just yet.

The Australian stunned everyone last month when she announced she was quitting tennis for good, but she could be swapping rackets for clubs as she has signed up for a golf exhibition match in July.

The 25-year-old, who won four Grand Slam titles, most recently at the Australian Open this year, will play in the Icons Series golf event in July alongside the likes of Manchester City boss Pep Guardiola and 23-time Olympic champion swimmer Michael Phelps.

“It’s such a unique opportunity to have fun, test yourself and compete,” Barty told the Sydney Morning Herald. “I hope through my participation in the series that we can encourage more women and girls to participate in golf around the world.”

Barty, a keen golfer with a four handicap, is no stranger to switching sports as she was once a professional cricketer, playing in the 2015 Women’s Big Bash League for Brisbane Heat during her first break from tennis. She has also got previous success on the golf course, claiming the amateur Brookwater Golf Club women’s title in 2020.

The first event in the Icon Series will take place at Liberty National in New Jersey in June with further tournaments planned for Europe, Asia and Australia. The 28 competitors will be split into Team USA, led by Fred Couples, and Team Rest of the World, led by Ernie Els.