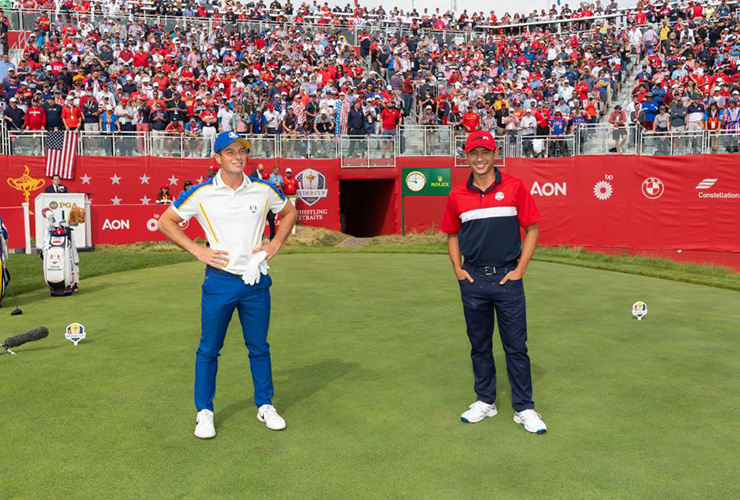 A father-and-son duo, countrymen and young guns among the highlights in Louisiana

By Joel Beall
The team-centric Zurich Classic of New Orleans returns this week. The PGA Tour’s only team event is now in its fifth year, transforming a tournament that was often lost in the post-Masters doldrums into one of the more captivating showcases of the spring. This year’s field boasts a number of star squads in Collin Morikawa and Viktor Hovland, Xander Schauffele and Patrick Cantlay and defending champs Cameron Smith and Marc Leishman.

However, the intrigue doesn’t stop at the marquee attractions. We compiled our favourite teams for this week’s Zurich Classic, a list fueled by our winning prediction, curiosity and sheer excitement.

The favourites, and for good reason: only Scottie Scheffler and Cameron Smith have enjoyed better seasons than these two. Both rank inside the top 10 in SG/approach (Hovland third, Morikawa seventh) and birdie average (Hovland fourth, Morikawa eighth), and Hovland had a good run at last year’s Zurich with Kris Ventura before a final-round 78 submarined their title hopes. Their short-game struggles could make the alternate-shot portions of the event a bit dicey. Still, their collective muscle is simply too great to overlook.

It’s been three years since this observation …

Love that journeyman Ryan Palmer has played with Jordan Spieth (twice!) and Jon Rahm at tour’s only team event, simply by asking them before anyone else had the chance to. Lesson to all high-school guys: if you wanna go to prom with the pretty girl, pop the question in October

Palmer went on to win the 2019 event, allowing him to run it back with Rahm in 2021 (the 2020 event was cancelled due to the pandemic) and this year he’s playing with … check’s notes … world No. 1 and reigning Masters champ Scottie Scheffler. Don’t get us wrong, Palmer has enjoyed a prosperous career, making more than 450 tour starts and racking up $30 million in total earnings. Conversely, it’s a résumé that pales in comparison to those of his Zurich teammates. Perhaps it is a byproduct of Palmer’s audacity and gumption, or maybe other players procrastinate in teaming up. Personally I like to think the young guys look at Palmer as golf’s version of Robert Horry, a veteran who brings good vibes and always comes up clutch. Whatever the reason, keep shooting your shot, Ryan.

Pereira ranks 22nd in SG/tee-to-green in his rookie season on tour and enters the Zurich 41st in the FedEx Cup. That standing could be higher if Pereira could hole a putt. Despite ranking 14th in approach and 12th in GIR percentage he’s 155th in birdie average. Though Niemann is not a player known for his short-game prowess he does make the most of his opportunities, ranking 10th in scoring and 18th in birdie average. If a bit of that can rub off on Pereira, watch out. 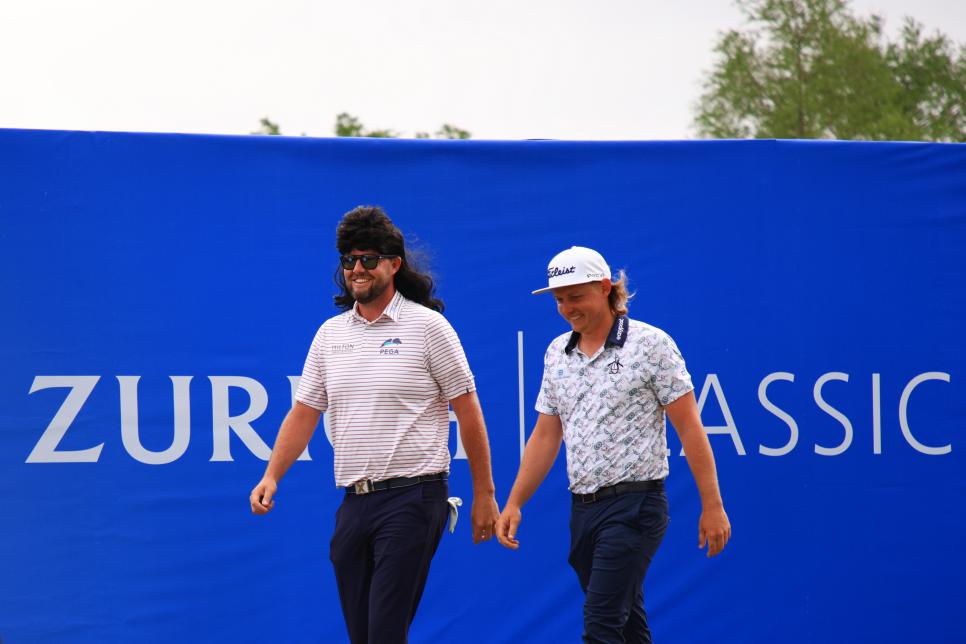 We could discuss Smith’s campaign, which has seen him go from top-30 player to vying for world No. 1. We could discuss Leishman’s super sneaky solid year (24th in strokes gained, 14th in birdie average) and how his massive odds for the Open Championship seem like a sound investment for those that would like to retire early. We suppose we should discuss these two are the defending champs. Instead, we like to make our annual appeal to the Zurich Classic to change Saturday’s format to a scramble (to see how stupid low these guys can go) and Sunday to worst ball or reverse scramble (for chaos).

Varner is no longer the little engine that could, contending at the Players and the RBC Heritage and logging a top-25 finish in his Masters debut. He still needs to figure out the final round (91st in Sunday scoring), but he’s close to a big-time breakthrough. As for Bubba, it’s fair to wonder at 43 how much gas is left in the tank, and the results in just six starts this year haven’t been promising. However Bubba is at his best when there’s an emphasis on creativity, and though TPC Louisiana does not necessarily lean into that forte, the event’s format does. Coupled with Watson’s history at this course (including a win in 2011 and T-8 last year) expect ‘good Bubba’ to show up this week.

Big fan of guys with the same names teaming up. Frankly, it’s appalling that none of the 11 Camerons are together this week.

Whatever the over/under is on Ryder/Presidents Cup mentions with these two, bang the over. Cantlay and Schauffele finished T-11 at last year’s Zurich, betrayed by a 74 on Friday. Schauffele is having an odd season, ranking 17th in strokes gained but turning in just one top-10 in 10 starts. Who better to get right with than Cantlay, coming off a runner-up finish in Hilton Head and owning five top-10s in just nine outings. And because we have nothing else to add: There’s no word if walk-up music is returning to the Zurich, so in case officials are waffling on the idea, let’s just say that while we appreciated the effort, unless it’s in front of a Ryder Cup first-tee amphitheater, the entrance songs do more harm than good.

They’re right next to each other in strokes gained (Homa 25th, Gooch 26th), and there’s a formidable balance in their games. Homa has been better off the tee, Gooch is able to keep the big numbers at bay, both have been efficient with their second shots. Though Gooch’s FedEx Cup standing (fifth) is mostly the result of a strong autumn, he has remained quietly solid in 2022 boasting a T-7 at Bay Hill and a T-14 at Augusta National with Homa not far behind with five top-20s in eight starts this year. 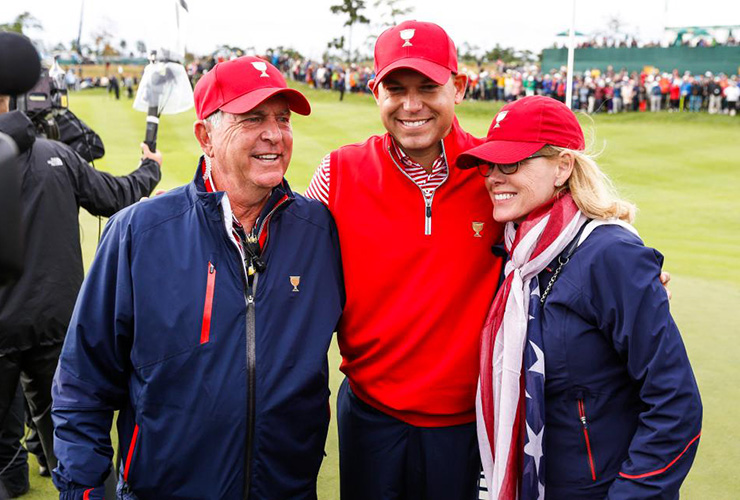 We had to confirm with tournament officials but that is indeed the Jay Haas, winner of nine tour events, captain of the 2015 United States Presidents Cup team and father of Bill. Jay checks in this week at 68 years young, so we don’t want to hear another word about Tom Brady still playing in the NFL at 44. Of course, Jay has some work to do to become the oldest player to tee it up at a tour event; that honour belongs to Jerry Barber, who appeared in the 1994 Buick Invitational at Torrey Pines two months shy of his 78th birthday.

After a rough few years Tommy is showing signs of revival, posting seven top-25s in his last nine starts. Plus, he has a solid track record at this event with a runner-up and T-4. As for Garcia (who earned a silver medal with Fleetwood here in 2019), he’s been OK halfway through the tour season, ranking 44th in strokes gained. Then again, this is a man who transforms from a very good player into a tour de force at team events. Don’t be surprised to see these Ryder Cuppers contending on the weekend.

Will Zalatoris and Davis Riley

Look, since this tournament went to a team format the common mistake has been the infatuation of young guns joining forces only to see said young guns fail to make the weekend. We say that to say this: There is no scenario where Zalatoris (T-6 or better in four of seven starts; first in SG/tee-to-green) and Riley (23rd in birdie average, runner-up at the Valspar last month) don’t win this by six shots.