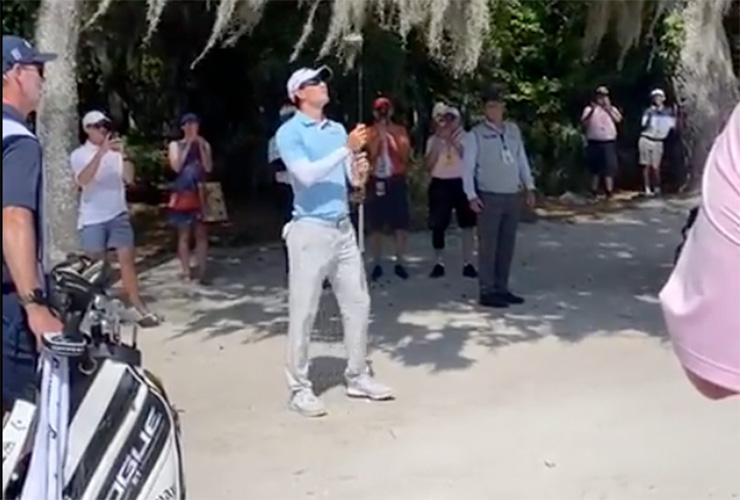 By Shane Ryan
HILTON HEAD, SC — As the leaders jockeyed for position down the stretch at the RBC Heritage, the funniest side plot at Harbour Town came courtesy of Dylan Frittelli. Early in Sunday’s final round, on the sixth hole, the 31-year-old South African pulled his drive left toward a waste bunker. Amazingly, the ball did not land — it got hung up in the Spanish moss hanging down from a tree branch.

When he found his ball, Frittelli gaped in confusion for a long moment before pulling off the shot of the day … or at least a shot of the day. Watch:

The simple, almost puzzled swing, combined with the sheepish wave to the crowd, will never stop being funny.

The ball rolled into the fairway, and heroically, Frittelli hit his approach to 10 feet and made par. Or at least it was a par, until the rules officials caught wind of the shenanigans. Frittelli’s ingenuity doesn’t change the fact that he struck an illegal shot. Per PGA Tour Communications:

Dylan Frittelli was assessed a two-stroke penalty on No. 6 under Rule 10.1c (making stroke while standing across or on line of play).

In simpler terms, that ruling means you have to be standing to the side of the ball when you hit it. If Frittelli had taken a step to the left and struck the overhead shot baseball-style, it would have been legal, but the fact that he was standing directly behind where he was aimed? That’s a no-no.

Afterward, Frittelli posted a video of the incident from a different angle, with some commentary that hinted he was not necessarily happy with the rules decision.

I thought this would be the greatest Par of my life 😲 I was assessed a 2-stroke penalty for “standing astride” my intended line of play during this shot. The rules of golf remain undefeated ✌🏼 🙄@SportsCenter top 10 play maybe? pic.twitter.com/KvnIIsXuQ9

The final result was a double bogey, and Frittelli stumbled to a final-round 76, but the ‘Donk from the Moss’ will live on in our hearts.