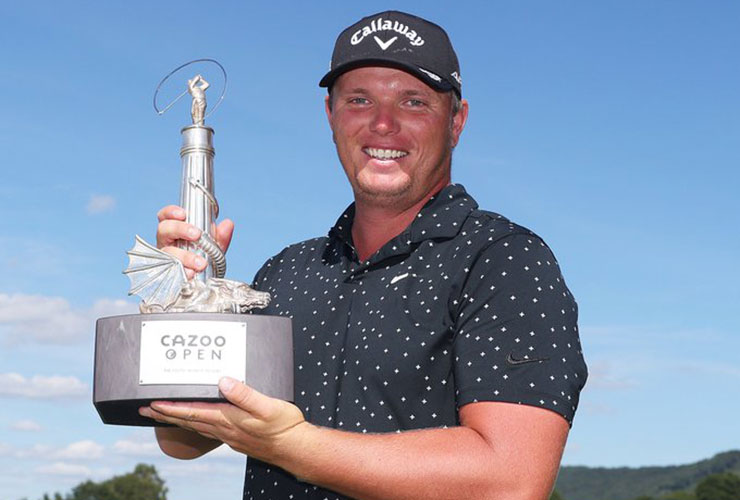 By Matt Smith
After three days of nip-and-tuck, Callum Shinkwin ran away with the Wales Cazoo Open as the Englishman cruised to a four-shot victory at The Celtic Manor Resort.

The 29-year-old held a one-stroke advantage over Frenchman Julien Guerrier heading into the final round and, while he did relinquish the outright lead early on after a bogey at the third hole, he soon extended his lead and ruthlessly hammered home a dominant victory.

Three successive birdies from the fourth and another at the ninth meant he was five clear at the turn on the Twenty Ten Course and Shinkwin never relented, while Guerrier fell back as the Frenchman struggled on the final day.

A couple of birdies on the way home earned Shinkwin a one under final round 70 and a 12 under par winning total.

Connor Syme had mounted a late charge with an eagle at the part five 11th followed by a trio of consecutive birdies from the 15th hole, but it was not enough to put serious pressure on the runaway leader and the Scot settled for a runner-up finish on eight under par, signing for a closing 68.

Callum Shinkwin was the only player in the field to shoot all four rounds under par 👏#CazooOpen pic.twitter.com/9syyLc35FM

“I feel great, even though I had a few shots of a lead heading into the back nine it’s still not easy, especially when Connor then made a charge,” Shinkwin said. “There was a lot of pressure still and even down the last, it’s not an easy hole, a lot of people have made a high number there even if they’ve hit the fairway. It’s still one of those ones you have to commit to with your shots.

“Connor didn’t really come into it until he eagled 11, he was four under at the time, then he didn’t do anything straight after that. But then he birdied 15, 16 and 17 and the 17th was the big one for me, holing that par putt to guarantee a three-shot lead going down the last.

“The scores haven’t been there before this but this week was my week. Winning anywhere is fantastic, it’s a great feeling, winning with family and friends here it means so much more.”