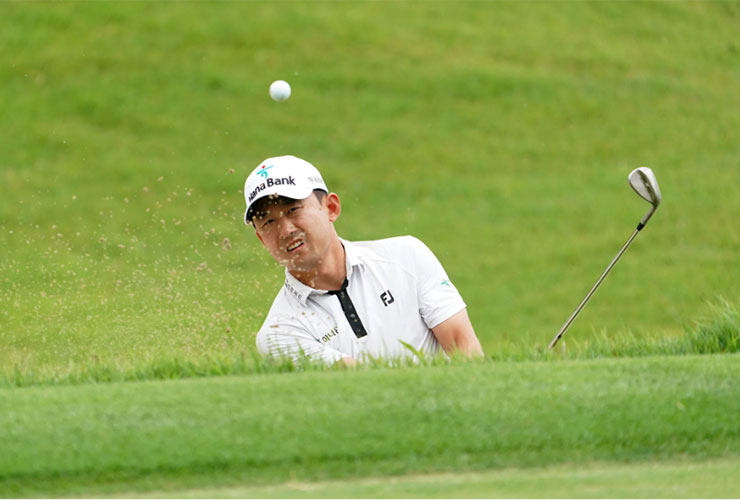 By Matt Smith
Seungsu Han of the US set the early pace in the 64th edition of the Kolon Korea Open on Thursday, posting a flawless three-under 68, and Junghwan Lee and Jaemin Hwang matched that score in the afternoon to make it a three-way tie at the top on one of South Korea’s toughest tracks.

With just over $1 million on offer and two spots at the Open Championship in St Andrews to play for in breezy and rainy conditions at Woo Jeong Hills Country Club, nerves were at the fore. It led to a jam-packed leaderboard, with only four strokes separating the top 28 players in the Asian Tour/Korea Golf Association co-sanctioned event.

Home hope Junghwan, 30, a two-time winner on the Korean circuit, has just returned to professional circuit after completing his National Service, said: “I stayed bogey-free on a difficult course. I feel good because I got a good result even though the weather was bad.”

“I haven’t played well after coming out from the army but my game is been more stable since I got married last year. I live in Gwangju and I drive about two hours to the course here every day. It is nice to get off to a good start. I will stay calm and see how it goes the next few days.”

Seungsu, 35, was prepared for a tough challenge on the course. “There were some tough pins. I played good, hit a lot of good shots, and stayed in the right spots all day,” he said. “I think this is my fourth time playing this tournament, so I am more familiar with it now. I know how they are going to set it up, so I don’t panic about it.”

“You just have to keep on hitting good shots, and leave yourself in the right positions here, especially with the pins that they are going to put on the greens. You have to be super patient. I hit the ball really well today, I kept it in play off the tee, hit a lot of greens and was also on the right side of the hole for the most part. When you do that you get some birdie looks.