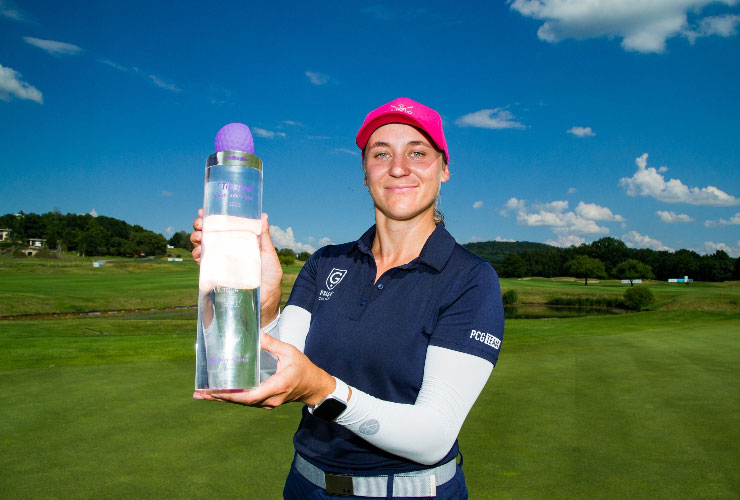 By Matt Smith
There was a surprise winner at the Czech Ladies Open as amateur Jana Melichova swept the pros aside to claim top spot in her home competition at Royal Beroun Golf Club.

After rounds of 68 and 65 on the first two days, the 24-year-old produced a final round of 69 to seal a one-stroke victory.

The former Old Dominion University student shot a blistering front nine on Sunday to open up a four-shot lead. But Melichova had some trouble just a few holes later carding three consecutive bogeys.

However, another birdie on 17 proved to be crucial as she reached a total of 14-under to become the second Czech winner on the LET.

“It’s a dream come true,” Melichova began. “I always planned to play LET and I always wanted to win a title and I succeeded today, I’m incredibly happy.

“I was mainly nervous, but I think I handled that stress really well. I was really happy with my game and everything was perfect. Even the three bogeys in a row didn’t get me down because I had people here and they were cheering for me, so I just wanted to make more birdies.

“I seemed calm but it’s tough out there, there were so many thoughts going through my mind so it’s hard to stay calm and patient.

“My dad likes to plant a lot of fruit and vegetables, and today he brought strawberries with me so after every birdie I was rewarded.”

The final standings of the 2022 #CzechLadiesOpen 📊

A magical win for Jana Melichova, as well as career-best finishes on the LET for @lauuragr and Elena Hualde 🙌#RaiseOurGame

Two players finished in a tie for second place with Czechia’s Klara Spilkova and Denmark’s Nicole Broch Estrup on 13-under.

It was a great finish to the week for Spilkova, who became the first Czech winner on the LET back in 2017.

Spilkova carded a final 70 (-2) which included four birdies and two bogeys to be runner-up alongside Broch Estrup.

“I feel a bit up and down, but I feel very happy and grateful for what I have done and how it all unfolded for me this week,” Spilkova said.

“It was really nice to play in front of the home crowd, there have been a lot of people everyday so I really appreciate their support. There was a lot of good energy through the week.

“I was pleased with how I stayed patient and believed in myself, I stayed solid and today I wish I made more putts but it is how it is, and that’s golf.

“It’s an amazing thing Jana has done today, she should enjoy the moment because this doesn’t happen very often. I’ve been on tour for 12 years and for her to be in a situation like this is very magical.”

Sweden’s Johanna Gustavsson continued her excellent form this season with a fourth-place finish after a final round of 66 (-6).

Despite bogeys on the second and sixth holes, the Swede soon rolled in three birdies consecutively on holes seven through to nine and added a further five birdies on the back nine.

“Today I had a bit of a rocky start,” Gustavsson admitted. “I had a few bogeys early on and I wasn’t happy about that. Then I started playing better and hit a few lovely shots close to the pin and had a lot of tap ins for birdie on the back nine, so that was nice.

“I feel good, I’m looking forward to playing in the Majors soon and my game feels good now.

“My dad was with me on the bag this week so that was great to have him here with me, it’s also nice to have Emma (Nilsson) here as well because I haven’t seen her much this year.

“I felt very good about my putting this week, which has been a bit of a thing for me this year – so the was good.

“It’s nice to get some more points on the Race to Costa Del Sol and to close the gap at the top a bit as well, that’s a bonus. It’s great to see so many Swedes up there as well.”

While Gustavsson remains third but has closed the gap to the top and now has 1,687.83 points to her name.

You might also like
WATCH: Highlights from the KPMG Women’s PGA Championship
In Gee holds on to win KPMG
Dubai’s Chiara Noja continues to dominate on LET Access Series
In Gee stumbles but clings on to KPMG lead
In Gee stays in charge after equipment change
KPMG: In Gee Chun jumps out to early lead
Five to watch at KPMG PGA Championship
KPMG Women’s PGA Championship doubles purse to $9m
Saudi girls celebrate Aramco podium spot
Dubai’s Chiara Noja skips another event through injury
Abu Dhabi-based 12-year-old wins in Scotland
All the latest news from around the UAE and beyond
Bronte Law triumphs in London
WATCH: Highlights from Day 3
Watch action from Day 2 at Aramco
Davis sizzles in London