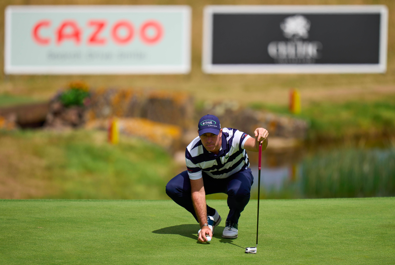 By Matt Smith
Frenchman Julien Guerrier goes into the weekend at the Cazoo Wales Open with a two-stroke lead at Celtic Manor.

He followed up his opening 67 with a 68 on day two for a seven-under total and a lead over England’s Callum Shinkwin and American Johannes Veerman.

Shinkwin mixed seven birdies with four bogeys in an impressive second-round 68, while Veerman holed his approach shot at the 18th for a closing eagle to secure a 68 of his own.

Jack Senior, Espen Kofstad, Marcus Armitage and Thomas Detry were another shot back on four-under.

He said: “It was a really good day for me. My driving and my iron game were not very good, I was really far from the pins but I only made one three-putt — my putting was really good and that was the key today.

“I played some bad shots but I made some good shots, otherwise I would not have shot three-under. I try to avoid watching the leaderboard, I try to focus on my concentration and it’s a very demanding course.

“Anything can happen at every hole and so I just try to play safe and in the good areas on a difficult golf course.

“My learning from Hillside is to stay patient, stay focused and concentrate on your own game, that’s all.”

David Howell, making his 700th DP World Tour appearance this week, comfortably made the cut on two over after shooting a level-par 71.

You may also like:
R&A increases Women’s Open purse to $7.3 milion
LIV Golf numbers grow on Asian Tour
Get the August 2022 edition of Golf Digest Middle East FREE here in English and Arabic
Legend John Daly ‘begged’ for LIV Golf spot
Mickelson was suspended by PGA Tour in March; banned for two years
Mickelson and Dechambeau lead group of 11 LIV golfers suing PGA Tour
Adam Hadwin in trouble with wife Jessica — again
LIV Golf gives to local charities in New Jersey
Bryson DeChambeau on LIV/PGA feud and his $125m signing-on fee
What it is like to be the first woman from your country to win a title
Five players to watch at the AIG Women’s Open
Australian army target more glory in Scotland
Laura Davies’ unique return to Muirfield
Phil Mickelson becomes highest-paid athlete of 2022
WATCH: LIV Golf highlights from Bedminster
Stenson takes debut LIV Golf title at Bedminster
LIV Golf takeaways after third event in New Jersey
The Gulf Club: Latest news from the UAE and beyond up to August 2022
Crocker takes the glory at Hero Open