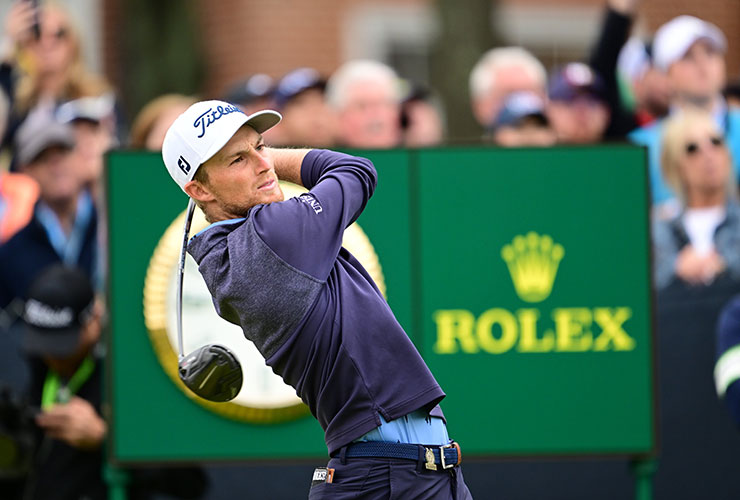 By Christopher Powers
The comment section of a professional golfer’s Instagram account is not a place any real-live human should frequent, especially the golfer his or herself. But, as 12-time NBA All-Star Kevin Durant has come to learn over the course of his 15-year career, it can be hard to block out the haters, and even more difficult to not engage with them.

Will Zalatoris, who is 25 years old and thus, terminally on his phone, is like Durant in that respect. Despite quickly becoming one of the best golfers on the entire planet, his latest major championship runner-up serving as extra proof, the former Wake Forest Demon Deacon admitted to wading into the dangerous waters that are his Insta comments.

During his post-round press conference at The Country Club, with his wounds still fresh after his birdie effort to force a playoff with Matt Fitzpatrick just slipped past the left edge, Zalatoris was asked if this near miss stung as much as the others he’s already collected. He kept it lighthearted, managing to take a shot at his social-media haters in the process.

“I think this one — I’m just fresh coming off of 18 because I thought I had it, and it just happened to stay out there. This one hasn’t sunk in,” he said. “Masters was pretty special, just obviously being there, considering that seven months prior I was playing on the Korn Ferry, and then having a chance to win the Masters.

“I honestly don’t know what to take from this yet. I was pretty pleased just because I’m known for my ball-striking. I’m sure all the Instagram morons are going to say it has something to do with my left wrist flexion coming down, but I promise you, it’s got nothing to do with it.”

That sounds like a guy who … reads his comments a lot? He got oddly specific there with the wrist flexion, almost like someone commented that on one of his most recent posts and it has stuck with him. It’s hard to blame him. Most people think these star athletes can just let that stuff “roll off their back”, which fails to consider that these are actual humans with actual feelings we are talking about.

The good news is, Zalatoris has displayed a knack for bouncing back quickly. He’ll be in this position again very soon, and he should, theoretically, eventually close the deal. Before that, though, he’ll need a little advice from @golffan67734438899 on wrist flexion. Only then can he make the major leap.

You may also like:
Can you guess the top 10 US Open earners?
Report: Ancer is the latest LIV Golf recruit
The US Open golf needed
Fitzpatrick became a major champion by turning his shortcomings into strengths
Phil admits he wasn’t ready
Watch that leader Morikawa
US Open Day 1 wrap
Rory produces strong start
Meet the US Open amateur hopefuls
US Open: A par 5 unlike any other
The Gulf Club: Latest golf news from UAE
A major record at US Open in prize money
Has the US Open become too one-dimensional?
US Open tee times and pairings
All you need to know about the US Open
DP World Tour denies Pelley attended LIV Golf
Rory on his LIV Golf miscalculation
Decision time for DP World Tour
The best story at the US Open so far