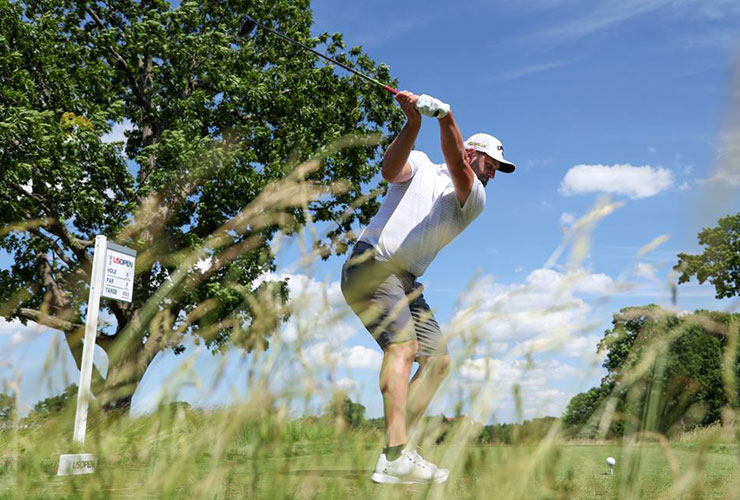 By Joel Beall
Historically, the US Open is not so much a tournament as it is a test. It is both the championship’s aspiration as well as its aura, and at times its Achilles heel, yet there is no doubt that the player who is left standing had earned a respect for passing golf’s most thorough examination. Yet tests themselves warrant scrutiny, and a view of the recent past casts suspicion that the examination is as thorough as believed. Or if there’s now a singular answer that is correct no matter what is asked.

That answer is distance, and its unequivocal importance to winning begs an uncomfortable question: Has the US Open become too one-dimensional?

Make no mistake, the US Open continues to call for conviction, audacity and calculation. But throughout its lifetime it has been known for testing all aspects of the game. Accuracy and power off the tee, approaches that knew when to attack, when to play safe and above all else avoid disaster. Scrambling was not an asset but a prerequisite, and if your putter wasn’t on, neither was your name on the leaderboard.

Those abilities are still needed. How much they are needed, though, has arguably been diminished by power.

Take a glance at the US Open’s recent roll call of winners. Its last six championships have been won by Jon Rahm, Bryson DeChambeau, Gary Woodland, Brooks Koepka (twice) and Dustin Johnson. That’s a lot of farm-boy strength. Ostensibly the last player not known for prodigious length to come out on top was Jordan Spieth at the 2015 US Open at Chambers Bay, yet that’s a bit of a misnomer, too; Spieth finished that season 15th in strokes gained/off-the-tee, above big hitters like Koepka, Jason Kokrak and Tony Finau.

In fact, the last seven winners all finished their seasons in their respective winning years in the top 20 in SG/off-the-tee, with Rahm, DeChambeau and Johnson finishing first or second in the category. Technically SG/approach has a stronger correlation to success at the US Open with five of the last six winners finishing T-6 or better in the stat, and the aberration — Johnson at Oakmont — wasn’t too shabby, either (T-11). However, the case can be made that it’s their power that puts them closer to the hole, leaving a shorter iron in hand and thus an easier second shot. And that said muscle allows them to keep driver in the bag for a 3-wood or long iron to find the fairway, knowing that it can compensate for whatever length is left in the bag. Or that, when they do find the rough, they have the muscle that others do not to give a go at the green rather than resigning to a safe pitch back into the fairway like some of their counterparts. 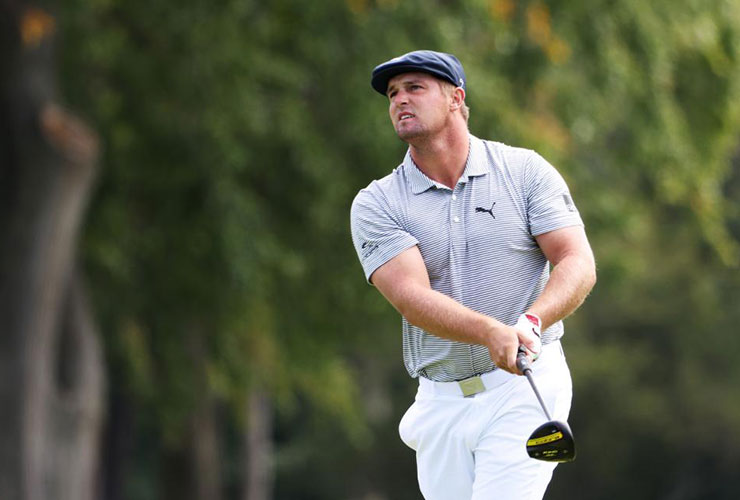 Bryson DeChambeau rode a bomb-and-gouge approach to win the 2020 US Open. Jamie Squire

It’s that last sentiment that permits a second look and how it pertains to the USGA and setup. For the first two rewards of power hitters — shorter irons in, the latitude to keep the big stick out — are advantages that the governing body can’t do too much about, nor should it: That is a reward that has been earned.

“I think distance has always provided an advantage for people,” says John Bodenhamer, the USGA’s chief championship officer. “You go back, it’s kind of relative in some ways. Bob Jones, when he won, and Jack Nicklaus and Tiger certainly, it’s always been part of it. You should probably have an advantage if you’re a little bit longer.”

But the US Open is supposed to put a premium on accuracy, not just in finding the fairway but the proper angle to allow for the best approach. Miss the fairway entirely and you’re hoping to advance the ball enough to retain a chance at par. That is the ideal, at least.

Not only are power hitters getting away without retribution, the rest of the field is actually more penalised. One of the common complaints from players at Winged Foot in 2020 and to an extent Torrey Pines last summer was that the fairways were so narrow that no one could hit them. If you’re taking away the field’s answer to distance in accuracy, the disparity between the long and the rest is even wider. The stats back this up: Only Koepka finished his week inside the top 20 in accuracy off the tee, and even that deserves an asterisk, as it came at Erin Hills, whose runaways were five-lanes wide.

To be fair, it’s not that recent US Open winners are merely bomb-and-gougers; few in the sport own games as complete as the reigning champ, Rahm. Moreover this trend is not unique to the US Open. What transpires at this event mirrors what you see weekly on the PGA Tour, and the PGA Championship has likewise been dominated over the past decade by players who are far from short. The Masters hasn’t been quite as affected, a byproduct of Augusta National’s standing as perhaps the best second-shot course in this country, while the Open Championship has been the most immune to the debate, as the Claret Jug requires a game played on the ground rather than the sky.

Conversely, as stated above, the US Open has fused its DNA to presenting a challenge more exhaustive than its counterparts, where pars matter and “good bogey” isn’t said in jest. When that challenge appears watered down, it calls for a larger discussion. 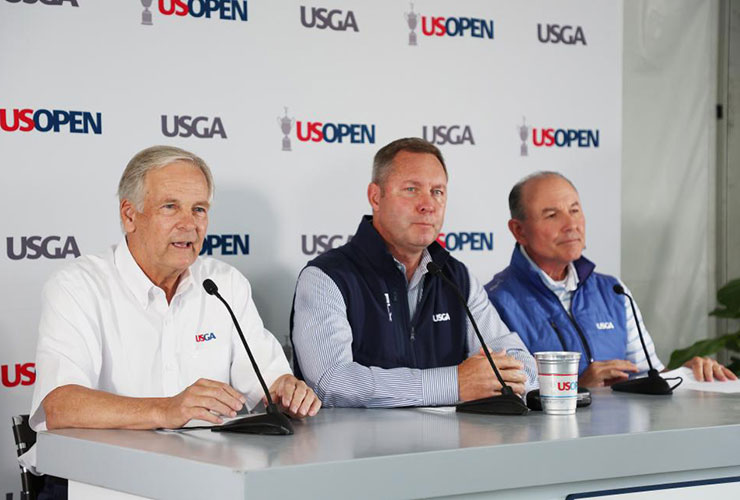 One of the ongoing conversations over the past decade has been distance gains, and the USGA — which governs equipment regulations in the United States — recently dropped a few more logs into the fire. In a notice to manufacturers on June 8, the USGA and R&A expanded its “areas of interest” regarding potential rules changes that would serve to not merely curb current distance at all levels of the game but at the tour level likely roll it back to distance levels from the 1990s.

“We’ve got to be the group that thinks about 30 years from now,” USGA CEO Mike Whan said. “Is this golf course obsolete to a certain level of players, or are golf courses like this never going to be built close to a city again because of the footprint?

“So what we’re trying to do is address the slope of a curve long-term. I think when we make changes that we’re proposing right now in distance, if we go through that process, people are going to be longer six years from now than they are today because guys are going to get stronger, more athletic, and I said that to the Tour players. … But we also need to slow down the curve of that line, the pace of that line in whatever we’re trying to address just to make sure that the game doesn’t outpace itself, and we wake up 30 years from now where our kids enter a game that’s weaker than the game we entered as kids.”

It seems the USGA knows how things are going, and where they are heading, are not sustainable for how this tournament is played and where the game wants to go. But when that will change and how remain uncertain. On multiple occasions Wednesday, Whan called the process “deliberate”.

True, the early reviews from Brookline forecast a championship traditionalists will love. “You need everything,” Rahm said. “You need to drive well, hit your irons well, chip well, and putt well and be mentally sane for four days. You can’t hide, period. I think that your biggest asset is mental strength out here, and that’s what you need.”

Justin Thomas added: “You always know the US Open is a grind. That’s why I love it. I think that’s why a lot of guys love it. It’s one of the few times of the year you’re kind of playing more in relation to par, and par is a good score. Driving the ball is going to be very important this week. I think like any major, especially the US Open, scrambling and salvaging and making those putts for par can kind of be the momentum builders.”

And according to Bodenhamer the things that are supposed to matter at US Opens will matter at The Country Club.

“What we do in a US Open, we endeavor to have the players get every club in their bag dirty,” Bodenhamer said. “This will be a good old-fashioned US Open with rough, and we’ll see how they navigate that and what they use off the tee,” Bodenhamer says. “It is not our narrowest, but will provide narrowness. I am telling you with these small greens and the firmness, they’re going to need to be in the fairway.”

Of course, there’s a difference between practice round recon and tournament play. After years of presenting golf’s most difficult test, the players have figured out the answer key. The Country Club is the USGA’s chance to offer a response.

You may also like:
US Open tee times and pairings
All you need to know about the US Open
DP World Tour denies Pelley attended LIV Golf
Rory on his LIV Golf miscalculation
Decision time for DP World Tour
The best story at the US Open so far