US Open 2022: This 57-year-old is easily the best story heading into competition at The Country Club 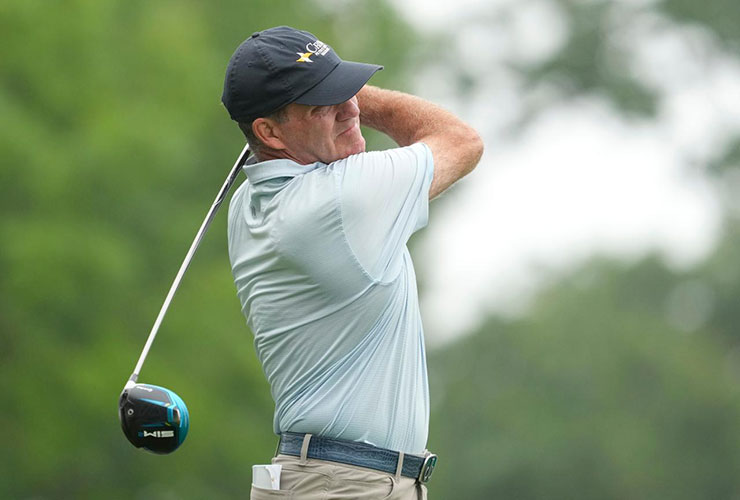 By Dan Rapaport
He’s the most unlikely player in the field, and we’re not exaggerating. Fran Quinn is far from the only 57-year-old to play in a major championship, but he didn’t get his tee time here by way of past victories. This wasn’t a Special Exemption for a Hall of Famer. He played his way through Local and Final Qualifying, and now he’s in the US Open in his home state of Massachusetts. Fran Quinn earned it. He is the oldest qualifier for this tournament since at least 1982, when the USGA started keeping track of such things.

Quinn is a proper journeyman, and we mean that as a compliment. A man who has played professional golf since he graduated from Northwestern in 1988. He’s had a PGA Tour card on a few different occasions, most recently in 2010, but has just one top-10 finish in 71 career starts. The meaty part of his golfing life happened on what is now the Korn Ferry Tour, where he played more than 366 events and won four times. He’s now plying his craft — again, a true Golf Lifer — on the PGA Tour Champions, where he has played full-time since 2017.

His son, Owen, is a professional golfer too. He’s also the impetus for his dad’s most unlikely run to Brookline.

“I was playing Tucson on the Champions Tour, and my son called me and told me he was playing (a Local Qualifier) at Taconic,” Quinn says. “I said, ‘Why don’t you put us both in.’ I said, you know what, let’s both get there. Let’s both get to the US Open this year.’”

Quinn had not even tried to qualify for a US Open since 2014, when he also made it through both stages of qualifying — and then made the cut at Pinehurst No. 2, opening with a two-under 68 that had him in a tie for second before an eventual T-52 finish. His career nearly ended when he fractured his glenoid, a bone in the shoulder, after stepping into a New York City pothole in 2019. Quinn had surgery that July but could only lift his arm to shoulder height until a second surgery in June 2020 threw his career a lifeline. Fast forward two years, and his game had improved to the point where he felt he’d give the US Open a try.

“After 27 holes it got really real,” he said, ”because I was four-under for the day until a couple of untimely bogeys at the end kind of made things tight.”

Tight indeed. Quinn finished at two-under for the 36 holes and earned a spot in an eight-for-three qualifier to get to The Country Club. That playoff could’ve doubled as an ad for all that is right with the qualifying process: there were three mini-tour pros, the best 17-year-old in the country; a college player; a long-hitting Korn Ferry Tour player, a PGA Tour card holder; and Quinn.

All eight players parred the first playoff hole. The second, Old Oak’s 18th, is an uphill par 5 that the young guns could easily reach. Quinn fanned his drive into the right rough and was forced to layup, only to knock his third inside two feet for a tap-in birdie. The perfect way for the geezer to get in.

And so Quinn now gets to play what he says will be his last major championship just a 45-ish minute drive from his hometown of Worcester. As for expectations, Quinn fully believes he is physically capable of hanging around. He does not intend to shoot 80-80, smile to his friends and family in the crowd and call it a day.

“Obviously these kids whack it, and whack it a long ways, a lot further than I do,” Quinn said. “But I also, I still move it out pretty decent distant. Very competitive. I expect to play decent.

“This being a home game I thought, why not give it a chance? And I look back, back in 1988, the last time they had the Open here, I missed (qualifying) by one at Purchase. And I was sitting up on that practice ground and my dad, God rest his soul, he had his arm around me and he said: ‘Franny, you’re going to play a lot of these.’ And who would have ever thought 34 years later, I would be playing at the Country Club, in Boston, at 57 years old. Pretty amazing.”

You may also like:
DP World Tour denies Pelley attended LIV Golf
Rory on his LIV Golf miscalculation
Decision time for DP World Tour
AS IT HAPPENED on Day 3 at Centurion
Highlights from Day 2
Final round pairings
All you need to know for the inaugural LIV Golf Invitational event at Centurion Club in England
The LIV Golf teams are announced
Big Phil confirms LIV Golf participation
Analyzing the 42 players who have signed up for LIV Golf