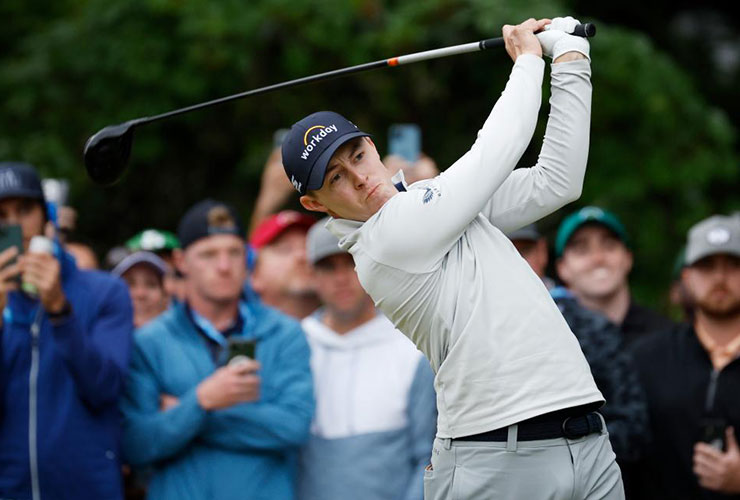 Matt Fitzpatrick drives from the 15th tee during the final round of the US Open. Jared Tilton

Matt Fitzpatrick has been zeroing in on his first PGA Tour win for some time, and when he finally grabbed it, it was a big one — taking the 2022 US Open in an epic final-round battle with Will Zalatoris and Scottie Scheffler.

The twists over the final nine were plentiful, including an uncharacteristic three-putt from Fitzpatrick at the short par-3 11th. However things really got interesting starting at the 13th, where Fitz dropped a 48-foot putt for birdie to seemingly take the lead until Zalatoris dropped a lengthy putt for par. Zalatoris dropped a shot with a bogey at 15, but with Scheffler about to knot him with a birdie at 17, Fitz dropped a 19-footer for another birdie at 15 after a brilliant iron approach from a bare patch 230 yards out that proved to be the difference.

The win bookends Fitzpatrick’s 2013 US Amateur win at the same venue and the familiar surroundings clearly agreed with him. Fitzpatrick tied for the tournament lead in greens in regulation, hitting 52 of 72 (72.2 percent), including an astounding 17 of 18 on Sunday. Fitzpatrick’s irons are a split set of Pings — he uses the company’s i210 model for his 4-iron and the venerable S55 irons, which have been out on tour for nearly a decade. The clubs have Ping CFS shafts and Golf Pride Tour Velvet grips.

Also of note in Fitzpatrick’s bag is the inclusion of a 7-wood. Although 7-woods have become increasingly popular over the past several years, Fitzpatrick was one of its earlier adopters.
But with Fitzpatrick, it always comes back to the putter and his Bettinardi DASS prototype proved the difference-maker. The putter, which was made specifically for Fitzpatrick, is a mirror image of the Yes! Tracy II model he used since he was 16 years old. Fitzpatrick put the blade-style putter, which includes face grooves just like the Tracy II, in play in 2020. In all, Fitzpatrick — previously a seven-time European Tour winner — made more than 80 feet of putts over the final nine holes.
Epic, indeed.

You may also like:
The US Open golf needed
Fitzpatrick became a major champion by turning his shortcomings into strengths
Phil admits he wasn’t ready
Watch that leader Morikawa
US Open Day 1 wrap
Rory produces strong start
Meet the US Open amateur hopefuls
US Open: A par 5 unlike any other
The Gulf Club: Latest golf news from UAE
A major record at US Open in prize money
Has the US Open become too one-dimensional?
US Open tee times and pairings
All you need to know about the US Open
DP World Tour denies Pelley attended LIV Golf
Rory on his LIV Golf miscalculation
Decision time for DP World Tour
The best story at the US Open so far