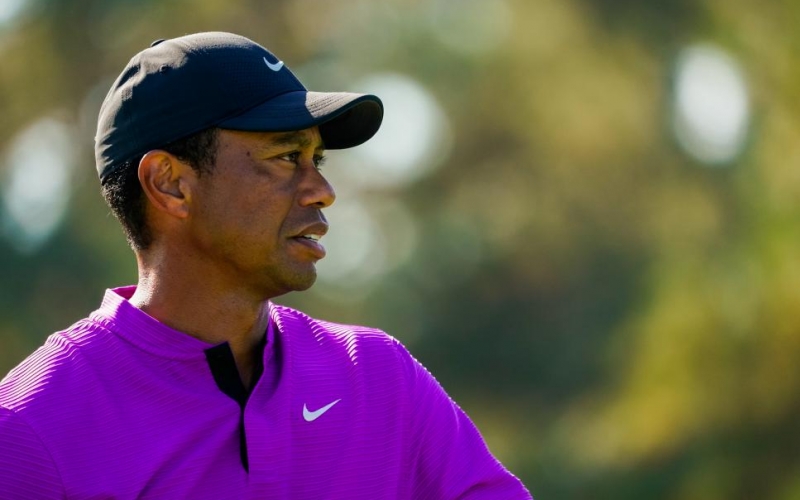 By Daniel Rapaport
AUGUSTA, Ga. — Watch the right knee. Not when he’s swinging—when he’s bending over. The more Tiger Woods’ right knee buckles as he picks up his tee or his ball out of the hole, the worse he’s feeling.

Saturday was always going to be a test—a 3:45 a.m. wakeup, 25.5 holes with only an hour break, a cool morning that had Augusta feeling like fall for the first time all week. The test was going to determine whether Woods had a shot at a sixth Masters. He was up for it, but his body wasn’t. The right knee never lies.

“These are long days,” Woods said. “I had my day off yesterday, which was nice. Today was not the case. We’ve been at it for quite some time.

“Yeah, it’s just part of the deal. If you have long days like this, I’m going to get a little bit sore, which I definitely am.”

Woods was clearly hobbled by a stiff back during the middle portion of his third-round 72 at the Masters. He began the marathon day at four under and finished it at five under, failing to keep up with Dustin Johnson’s thoroughbred pace and assuring that his 581st night as the reigning Masters Champion will be his last. At least this time.

“I can walk all day. The hard part is bending and twisting. I think that’s part of the game, though, and so that’s always been the challenge with my back issues and I guess will always continue to be.”

Thursday morning’s rainstorm had this Masters playing catchup, and half the field had to return to the course at the crack of dawn to polish off their second rounds. Woods was one of them. With the course still soft and windless, he felt he could get to six or seven under by the end of his second round, which would have put him within arm’s distance of the leaders.

But Woods struggled to control his spin throughout those final seven-plus holes, landing approach after approach pin high but having them rip back to the dreaded 20-foot range. He plays the softest (and, thus, spinniest) ball on Tour, and balls aren’t supposed to rip back at Augusta National. But, as you’ve heard ad nauseum, this is a Masters unlike any other.

Woods managed just one birdie coming in, but he was still just four shots back after 36-holes—well within striking distance. That, plus a comfortable pairing with Rickie Fowler and Billy Horschel, made for an optimistic atmosphere on the first tee. But he struggled to find fairways over the front nine, making seven straight pars before a crushing bogey at the par-5 8th.

After hitting his tee shot off the ninth, he did a series of stretches. Then he made a fist and hit his back side five times in a row, pleading for it to loosen up. It wouldn’t listen. Not even for Tiger.

He was two over for the round after a bogey at 11, then birdied 12 and 15 coming home to salvage an even-par round. Woods birdied four of his first 10 holes of this Masters but has made just five in the 44 holes since. Which, as he’d be the first to tell you, is simply not good enough.

And yet, this week has not been a disaster—Woods will enter Sunday well inside the top 30, and he could well post his best finish since January. A low one on Sunday could even result in a back-door top 10. But at 44 years old with 15 majors to your name, back-door top 10s are about as useful as…well, you get the picture.