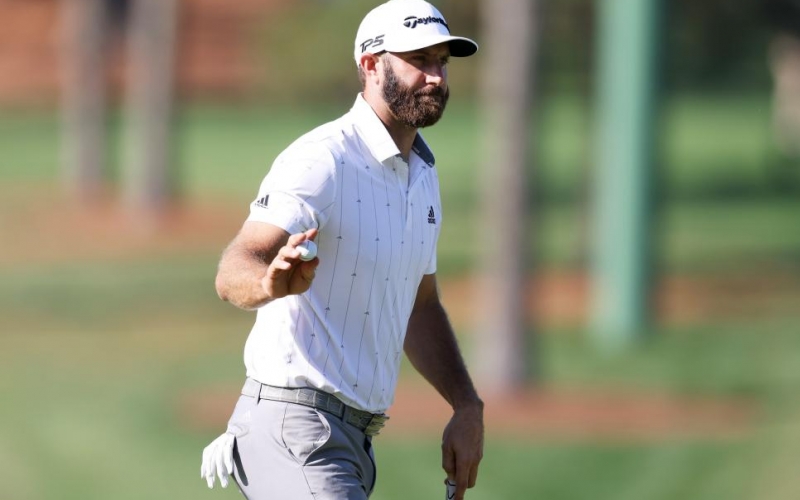 Rob Carr
Dustin Johnson reacts after making a putt for birdie on the seventh green during the third round of the Masters.

By Brian Wacker
The third round began on Saturday with 10 players separated by just a single stroke. It ended with Dustin Johnson leading by four after a sensational seven-under 65 to seize control of the 84th edition of the Masters.

Now the only question that remains is will it be enough to deliver a green jacket and an elusive second career major championship for the world’s top-ranked player on Sunday.

For all of Johnson’s success—23 career victories on the PGA Tour, the 2016 U.S. Open at Oakmont among them, and at least one win in each of his 13 seasons—his table of major championship trophies remains oddly a lonely party of one. That hardware waits, patiently and unbothered, for others to show up.

Not that there haven’t been opportunities for more to join. Four times previously the 36-year-old Johnson has led going into the last round of a major. Four times he has failed to convert.

“If I could play like I did today, I think it’ll break that streak,” he said Saturday night. “I feel like I’m swinging really well.”

Johnson has swung it well before, too. Yet only at Oakmont, where he entered the final round tied for second four strokes off the lead, has he gone on to win at a major.

At the PGA Championship at TPC Harding Park in August, Johnson led by a stroke after 54 holes. Collin Morikawa was spectacular with a Sunday 66, while Johnson managed to play his first 15 holes in just even par despite a day laced with scoring opportunities. He finished two back in a tie for second after a two-under 68 that felt indifferent. 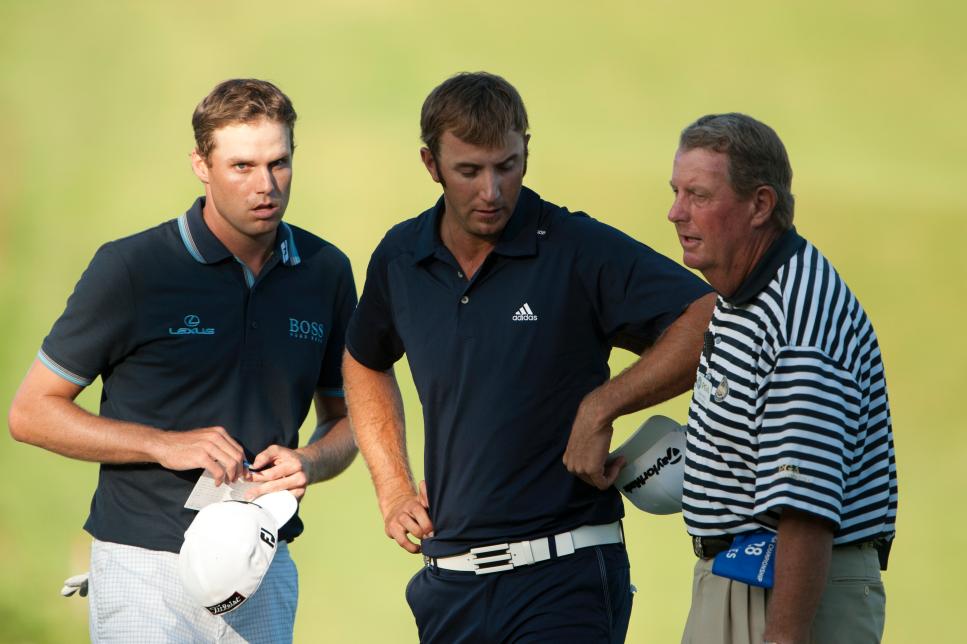 Montana Pritchard
Dustin Johnson (centre), flanked by Nick Watney, discusses with David Price, a rules official, the penalty on the 72nd hole that cost him a chance to be in a playoff in the 2010 PGA Championship.

Then there was, of course, the final round of the 2015 U.S. Open at Chambers Bay, where Johnson reached the par-5 18th in two, leaving himself just 12 feet for eagle and the win. Instead, his putt slipped four feet past and he missed the one coming back, too, to lose by one to a stunned Jordan Spieth.

In the 2011 Open Championship, while playing alongside 42-year-old leader Darren Clarke and trailing by two, Johnson tried to reach the par-5 14th at Royal St. George’s in two. But he inexplicably pushed his 2-iron so far right that it went out of bounds, thus ending his chances of capturing the Claret Jug.

The year before was even worse.

In 2010, Johnson had two chances to win a major and the results were comically awful. The U.S. Open at Pebble Beach was the first time that Johnson led going into the last day in a major, and he played like it. He admitted years later that he got fast with everything—swing, walking, club selection. His three-shot lead vanished quickly, too, in the form of an 82 that included a triple bogey on the second hole and a double on the third. A couple of months later at the PGA Championship at Whistling Straits, there was the infamous bunker gaffe, with Johnson unknowingly grounding his club in the sand on the final hole for what was a two-stroke penalty that cost him a spot in a playoff.

Now to the Masters, where three years ago, while on an incredible heater as the No. 1 player in the world, he kicked away his chances before the tournament even began, slipping on a set of stairs in his rented house and injuring his back on the eve of the first round. He withdrew the following day.

This week, just one question remains: Will Johnson make history on Sunday at Augusta National, or simply repeat it?