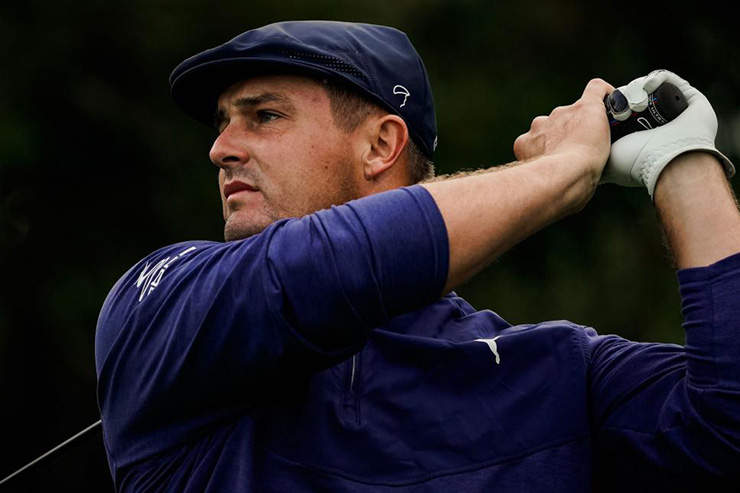 By Joel Beall
He has completed 36 holes, and thanks to a second-nine charge, there will be 36 more for Bryson DeChambeau, making the cut on the number. However, the Masters favourite is anything but heading into Saturday afternoon, his tournament thus far a tale of two holes—and two 7s.

“It just seems like there’s a lot of things going not in the right way,” DeChambeau said Saturday morning after his second-round 74, which left him at even-par 144, nine shots off the lead. ”I’ve certainly played worst golf than this and won golf tournaments. So, you know, it’s one of those things where it’s golf. You can’t control everything as much as you try.”

The first big mistake came at the 13th during Thursday’s first round, the hole DeChambeau was supposed to bend to his will. Instead, the 13th reminded all that, while distance gains have muted much of its challenge, it is no pushover.

DeChambeau’s drive sailed right, catching the loblolly pines and dropping into a pile of straw. There was a window, but it was tight. From 190 yards and the ball sitting slightly above his feet, punching out seemed like the choice. But DeChambeau did not take his medicine, choosing the aggressive route. It was the wrong choice, as his shot knuckled hard and left and long, barreling into a bush above the green. He found his ball but was forced to take an unplayable, and he flubbed his fourth short of the green. The fifth wasn’t much better and the sixth stayed out of the cup. On the second easiest hole on the course through two rounds (4.601 average), DeChambeau made a double-bogey 7. It could have been worse; had they not found his ball, DeChambeau’s provisional went in the water.

RELATED: Bryson DeChambeau: The man who could change golf

“I just didn’t draw it around the corner enough, and I got greedy,” DeChambeau said. “This golf course, as much as I’m trying to attack it, it can bite back.”

The second mistake was not really a mistake. On Friday at the start of his second round, DeChambeau attempted to drive the green at the par-4 third but sailed his tee shot left into a second cut that, this week, is not exactly a second cut. Despite the efforts of a search party, DeChambeau’s ball could not be found, leading to a curious exchange in which DeChambeau asked a rules official if it meant the situation qualified as a lost ball. The official replied in the affirmative, forcing DeChambeau back to the tee box. His second drive and third shot overall also went left, with his fourth going over the green. He failed to get up-and-down, leading to a triple bogey.

“I mean, definitely throws you for a loop when the guy goes and gives you the ball on the fourth tee box. ’Oh, I found it.’ You know, I struggle whenever we know it’s in that area and it’s all wet and it’s a plugged lie, guaranteed,” DeChambeau said. ”And they don’t give you—they have to say it’s within a couple foot area. I’m like, ‘Well, I know it’s in this area that’s plugged, so I would think I would get some relief,’ but clearly not. The three minutes was up, so I took a penalty and went back to the tee box and proceeded to hit in the same spot and had a really bad lie after that.” 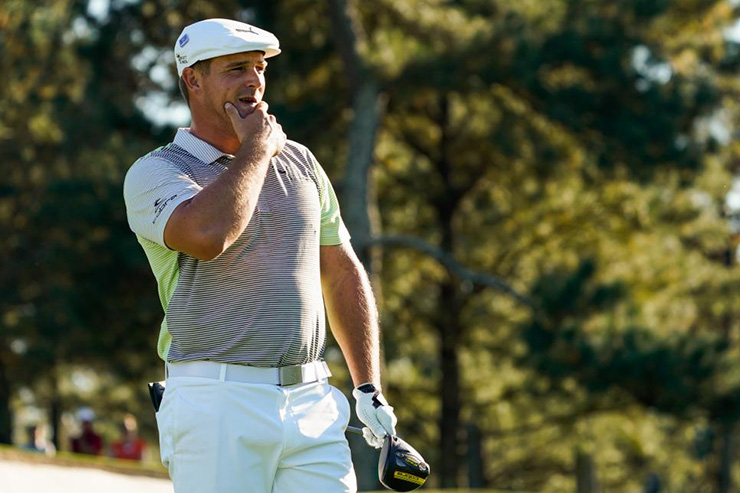 This is not to say Bryson’s woes were contained to two holes. He made six bogeys in Round 2, which spilled into Saturday morning, many spurred by wayward drives. As for the drives that were on the grid, DeChambeau failed to take advantage of them, a sentiment best encapsulated by his fifth hole on Thursday. DeChambeau dialled in the launch codes and carried the left-side bunkers, a 350-yard drive that left a wedge into the uphill, 490-yard beast. However, DeChambeau’s approach went long into a bunker.

It was not all ugly. He racked up 12 birdies through two days, an amount only Patrick Reed, Justin Thomas and Sungjae Im have surpassed. Subtract the two 7s and fill them in with pars, and DeChambeau would be in contention. Unfortunately for DeChambeau, that’s now how this rodeo works.

Also not helping matters: Following his second round, DeChambeau said he hasn’t been feeling well.

“I was feeling something a little weird last—two nights ago, and I came out yesterday and was fine for the most part,” DeChambeau said. “As I kept going through the round, I started getting a little dizzy. I don’t know what was going on, a little something weird. So I got checked for COVID last night, and I was fine, nothing. But I had to do the right thing and make sure there was nothing more serious than that. I don’t know what it is or what happened, but these past couple days, I’ve felt really, really odd and just not 100 percent. Some of that’s played into it. I just feel kind of dull and numb out there, just not fully aware of everything, and making some silly, silly mistakes for sure.”

DeChambeau continued that every time he bent down he would lose his stance, and that it’s the first time he’s dealt with this before. “I don’t know what’s going on,” he said. “I’ve got to go and do some blood work and get checked out and figure out what’s going on for this off‑season.”

There are still 36 holes left, more than enough time for DeChambeau to improve his standing. And whatever illness is bothering DeChambeau, the U.S. Open champ conceded his game remains a work in progress.

“Wet ground and water has always been my nemesis for some reason, just can’t figure it out, whereas some people have no problem with it. They’re able to hit it and have no issues,” DeChambeau said. “Something I’ve got to work on this offseason. I’ve got to figure out some golf ball stuff. I felt like I was swinging my irons pretty well. Driver was not well. I just, again, felt dull and numb out there. I don’t know what else to say.”