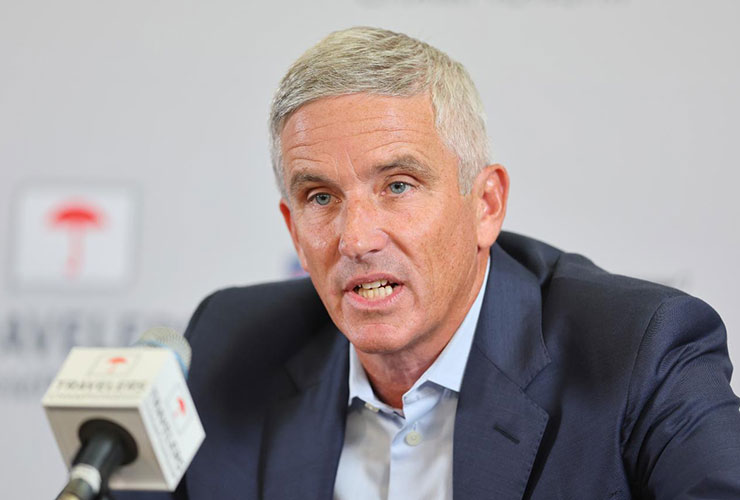 By Dan Rapaport
Commissioner Jay Monahan announced wholesale changes to the PGA Tour’s structure, schedule and FedEx Cup in a press conference at the Travelers Championship on Wednesday.

Monahan outlined what had been communicated to players in a letter obtained by Golf Digest: The PGA Tour will return to a calendar-year schedule beginning 2024; the FedEx Cup Playoffs will be reduced from 125 players to 70; purses will be raised significantly for eight events; and three international events will be introduced in the fall for the top 50 in the prior season’s FedEx Cup standings.

The moves are widely seen as a response to LIV Golf, the Saudi-backed tour taKING stars away from the PGA Tour with huge guaranteed-money contracts.

“We welcome good, healthy competition,” Monahan said. “The LIV Saudi golf league is not that. It’s an irrational threat; one not concerned with the return on investment or true growth of the game. When someone attempts to buy the sport, dismantle the institutions that are intrinsically invested in its growth, and focus only on a personal priority, that partnership evaporates, and instead we end up with one person, one entity, using endless amounts of money to direct employees, not members or partners, toward their personal goal, which may or may not change tomorrow or the next day.”

At the press conference, Monahan acknowledged that the PGA Tour cannot keep up in a battle of pure resources and reiterated the tour’s commitment to its core values of legacy, history and meritocracy. Still, he did share some significant news that will put more money in the pockets of the tour’s top players.

“We don’t expect to overcome this current challenge by relying on our legacy and track record alone,” Monahan said. “We’ve been on a path for a number of years to strengthen and evolve our product for the benefit of our fans and players alike. Those plans are obviously accelerated in light of the current environment.”

The top 50 finishers in the FedEx Cup will qualify for a three-event, no-cut international series to be played in the autumn, while the rest of the players will play in domestic events to jostle for priority numbers and to preserve their status for the following season among the top 125.

“This is a significant change, and it affects every member of the PGA Tour,” Monahan said. “And what we talked about yesterday in that player meeting and what we’ve talked about through the months is every single player in that room, every single member that carries a PGA Tour card, they have the ability to be the No. 1 player in the world. So it’s less about where you are today and it’s more about where the opportunity is, where the ultimate opportunity is.

“And I think when people start to think about the changes that we made along those lines and in those terms and in this context, they realise that creating a tighter schedule for our players and our fans, FedExCup schedule January through August, and having that consequence at the end of the year actually elevates and lifts every single event within the FedExCup schedule, which is good for every single member out here.”

The purse increases, Monahan said, will be funded by sponsor support and supplemented in the short-term by the tour’s operating revenue.

Shortly after Monahan began his opening remarks, LIV Golf officially announced the signing of Brooks Koepka, who will make his LIV debut at next week’s event in Portland. Monahan said he was appreciative of Koepka’s contributions to the tour and disappointed to learn of his departure but declined to speak further on the matter.

You may also like:
LIV players permitted to play in Open
PGA plans tour series to rival  LIV
LIV Golf announces latest major signing
Brooks Koepka set to make his move to LIV
Report: Ancer is the latest LIV Golf recruit
18 parting thoughts from the US Open
Can you guess the top 10 US Open earners?
The US Open golf needed
Fitzpatrick became a major champion by turning his shortcomings into strengths
Phil admits he wasn’t ready
Watch that leader Morikawa
US Open Day 1 wrap
Rory produces strong start
Meet the US Open amateur hopefuls
US Open: A par 5 unlike any other
The Gulf Club: Latest golf news from UAE