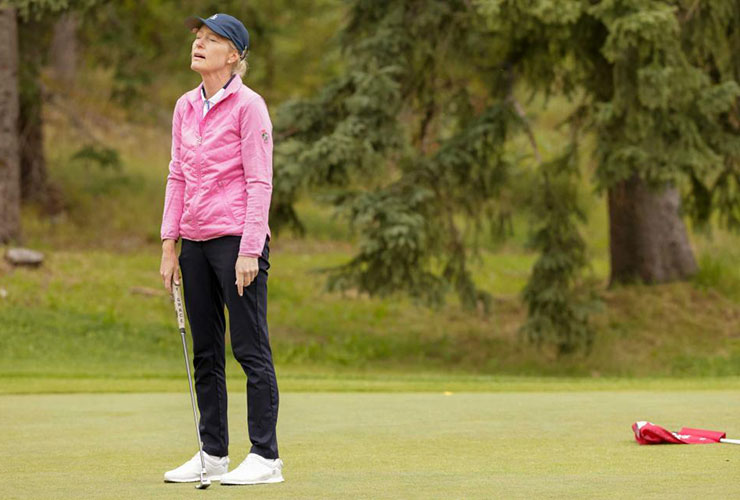 Lara Tennant reacts after missing her putt on the 10th green during her Round of 16 match against Lynn Thompson at the 2022 US Senior Women’s Amateur. Steven Gibbons

By Ryan Herrington
Twenty. That’s how many consecutive matches Lara Tennant had won in the US Senior Women’s Amateur, dating back to 2018. As the USGA celebrated playing a championship in Alaska for the first time this week (knocking off its 50th state), the 55-year-old from Portland, Oregon, was trying to make her own history. Just one woman had ever won a USGA championship four straight times — Carol Semple Thompson doing it in the US Senior Women’s Amateur from 1999-2002. After taking her first two matches this week at Anchorage Golf Course, Tennant was hoping to join her.

Lynn Thompson, however, had other ideas. The 64-year-old from Cincinnati took advantage of Tennant’s slow start in their third-round match on Tuesday, jumping to a 4-up lead through 10 holes. She then watched Tennant make four birdies over her next five holes to claw back to 1down. But a birdie on the 17th allowed Thompson to close out the match, 2&1.

It’s fair to characterise Thompson’s win as an big upset. She had only qualified for the US Senior Women’s Amateur three times in 14 years of eligibility and won just one match before this year.

Meanwhile, ignorance appeared to be bliss.

“Well, it’s good I didn’t know that [that Lara was 20-0],” Thompson said. “I really just didn’t have any expectations going into the match but to do my best. And it turned out [OK].”

“It’s been a dream [the last four years],” said Tennant, who like in previous championship runs had her father, George Mack, on her bag. “A dream that I never expected. And I just feel so honoured to be a champion and blessed that I’ve had that opportunity.”

Unfortunately for Thompson, the dream win was followed by disappointment in Wednesday’s quarter-finals. Facing former US Women’s Mid-Amateur champion Kathy Hartwiger, Thompson got off to another hot start, winning two of her first three holes, but lost four straight on the back nine to ultimately lose, 3&2.

The notorious Hinkle Tree from the 1979 U.S. Open has died, but the legend lives on

USGA to honour winners of all its championships with new exhibition event at the U.S. Open

Will the USGA wade into distance debate in 2018? Yes or no, the association’s new president has a busy year ahead