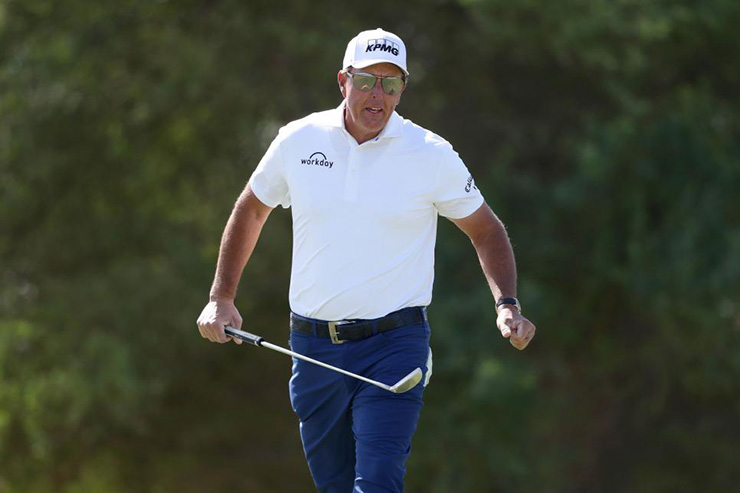 By Joel Beall
Phil Mickelson released a wide-ranging statement on social media Monday outlining his return to golf, with his first start coming at this week’s LIV Golf Invitational. Within the statement, the 51-year-old also seemed to telegraph his intentions to play in a second event: next week’s U.S. Open.

Mickelson noted that he was ready for “a fresh start” after taking a nearly three-month hiatus from golf that including skipping this year’s Masters and PGA Championship. Though the statement was mostly about the opportunity to compete on the Saudi-backed LIV Golf series—including an apology for his February comments that ultimately led to his sabbatical from the game—Mickelson also said he still “intends to play the majors.” This is notable as next week the golf world visits The Country Club in Brookline, Mass., for the USGA’s flagship event.

In April, Mickelson’s agent, Steve Loy, announced he had filed an application for Mickelson to compete at The Country Club, but that it did not mean Mickelson was certain he would play. As of this writing, Mickelson, a six-time major winner, is listed in next week’s U.S. Open field, earning an exemption through his win at the 2021 PGA Championship. However, the PGA Tour has promised disciplinary actions toward members who jumped to LIV Golf, and there has been speculation that the governing bodies of the four major championships may follow suit in some capacity, potentially impacting the 13 players competing in London who have also qualified for the field at Brookline.

Last week, the USGA released the following statement to Golf Digest regarding the eligibility of players in the field for the U.S. Open who are affiliated with LIV Golf. “We pride ourselves in being the most open championship in the world, with roughly half our field securing their position via local/regional qualifiers,” a USGA spokesperson said, “however we reserve the right, as we always have, to review any competitor’s situation on a case-by-case basis.”

Mickelson has remained out of the public eye since late February when the Fire Pit Collective published an interview in which Mickelson claimed he was using the Saudi-backed golf circuit as leverage against the PGA Tour and claimed he had paid lawyers to draw up the league’s operating charter. The story caused backlash, with Mickelson issuing an apology for his “reckless” comments and stating he would be taking time away from the sport. Mickelson skipped the Masters—a tournament he’s won three times—for the first time since 1994, and three weeks ago dropped out of the PGA Championship, a tournament where he was the defending champ. Mickelson’s last appearance was at the Saudi International in February, and has not played in the United States since the Farmers Insurance Open in his hometown of San Diego in January.

Mickelson has made 30 career starts at the U.S. Open, the one major he still needs to win to complete the career Grand Slam. He has finished runner-up a record six times at the national championship, and has had a number of dust-ups with the USGA over that span, including hitting a moving ball at the 2018 event at Shinnecock.

You might also like:
All you need to know for the inaugural LIV Golf Invitational event at Centurion Club in England
Analyzing the 42 players who have signed up for LIV Golf
Your top players to watch at LIV Golf Invitational
DJ to headline LIV Golf Invitational
Rory McIlroy says LIV Golf players should not be punished harshly
PGA players defend jump to LIV Golf Invitational
Looking back at the Dubai Golf trophy with captains and players
Bland to play LIV Golf, even if it means ban
Rickie Fowler considers LIV Golf options
Shiv Kapur hails Asian Tour opportunities thanks to LIV Golf and Saudi Golf
The Gulf Club: The latest golf news from around the UAE
Meet Malak, the first Arab to play at US Women’s Open
In the mix: Olivia Jackson
Impossible pin position causes havoc at high school event