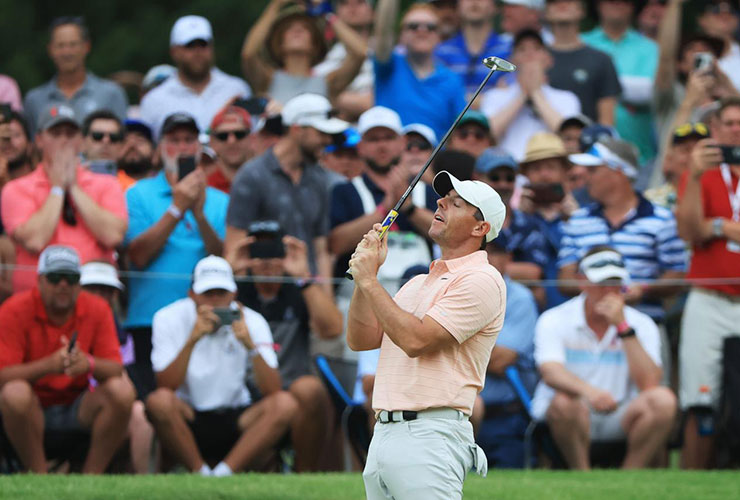 By Shane Ryan
The situation on the ground on Friday developed in a way that seemed to lead the golf mind inexorably back to the land of capital-N Narrative: mid-career Rory McIlroy was too close to the lead at a major championship, and mid-career Rory McIlroy tumbled. It’s important, though, to keep our heads: This is Friday afternoon, 36 holes remain, rain is coming, and the men in the top two spots of the leaderboard have never won a major before. There is everything for McIlroy to play for.

But … he missed a chance here.

Not definitively, and not permanently, but at least emphatically. Starting the day at five-under, he led the tournament, and perhaps this one felt different. The late charge at Augusta had the feeling of an exorcism, chasing out the ghosts that had kept him from another major crown since the golden year of 2014, but this felt even more legitimate since he actually stood alone at the top. Then Friday came, Justin Thomas fought through the bad luck of the morning wave to plant his stake in the ground at six-under and wait to see what the more fortunate afternoon crew could do.

The answer was, not much at first, but then as the winds died down late in the day, quite a lot. Mito Pereira and Will Zalatoris were the thoroughbreds, but every single one of the best 15 golfers improved his score on the day — sometimes dramatically — save for two. One of the exceptions was Matt Kuchar, who started the day at three-under and remained there 18 holes later.

The other exception? Rory McIlroy, the only one in that select group to drop a stroke. His approach and putting game were the chief culprits, representing a major reversal from Thursday’s excellence; where he was 18th and fourth in strokes gained in those categories in Round 1, he finished 105th and 83rd on Friday. A bogey on the second hole, in which he flew his approach 20 yards past the hole into the right rough, set the tone, and another poor approach on No. 7 saw him slip further. Meanwhile, his closest birdie attempt on the front nine came from 19 feet, and most holes saw him without a realistic chance of clawing back. He finally made birdie on 12, but as the field began to catch up and even surge past him, the best he could do was go up and down on the last three holes to cling to four-under.

“I didn’t put myself in position off the tee enough to get my approach to where it needed to be,” he said, explaining that the drives, rather than the approaches, were the real issue. “The thing is like you miss it in the left rough on 1, I was literally a foot into the rough on 2, a foot into the rough on 3. They’re good drives, but it’s a massive difference between being on the fairway and being in this rough.”

The obvious follow-up, regardless of cause, was why? Why were things so different between Thursday and Friday, when the rest of the contenders were going as low as possible? According to McIlroy, the pressure of being in the lead wasn’t the issue.

“I felt pretty relaxed out there,” he said. “I wouldn’t say it was nerves. It was maybe just — you’re not going to go out and shoot 65 every day. Maybe it was a case of, I wasn’t maybe quite as committed or aggressive as I was yesterday.”

A careful listener will realise that with this response, McIlroy more or less kicked the metaphorical can down the road, leaving unanswered the big question of, again, why he was less committed and more tentative. Still, though he was his usual amenable self, he wasn’t in the mood to stick around plumbing the depths of his psyche, and after a handful of questions, he exited stage right.

Between Friday night and a potentially rainy Saturday, he’ll have to contemplate a very different reality than the one that presented itself 24 hours earlier. Instead of holding a lead, albeit slim, he’s staring down a five-shot deficit against a player in Will Zalatoris who looked nearly perfect on Friday, and between the two of them sits Justin Thomas and Bubba Watson, the latter of whom caught fire and shot one of the few 63s in major championship history. It’s a daunting view, and the deficit will require at least one superlative round to close the gap.

Like Tiger Woods, McIlroy’s major wins have been classic front-runner coups. He blew the field away at Congressional in 2011 and Kiawah in 2012, and though his dual victories at the Open and the PGA in 2014 were closer, he held leads after the second and third rounds in both. It will be uncharted territory if he pulls off a comeback at Southern Hills, but the situation itself isn’t uncharted territory. He’s been here plenty of times before, particularly in the eight years since his last major win, and despite a handful of exciting late runs, the task has proven too tall. It would be foolish to count someone of his historical ability out of the running — the man is still T-5 — but the opportunity squandered looms large.

McIlroy came to Southern Hills hoping for a new chapter in his major career, but as the sun set on Friday, it looked like another case of history repeating.