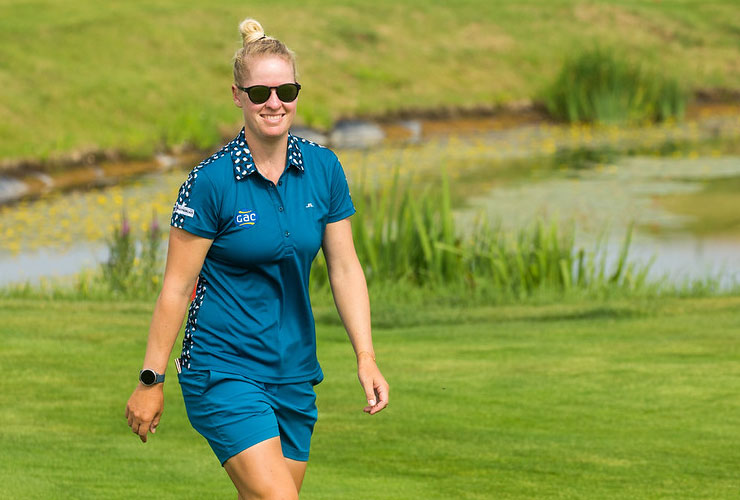 By Matt Smith
The Czech Ladies Open is set for an intriguing final day as Denmark’s Nicole Broch Estrup and Austrian amateur Emma Spitz are tied at the top on 12-under-par.

Heavy overnight rain continued on Saturday and led to a three-hour delay to proceedings and some soggy conditions.

But once action got under way, the Danish overnight leader continued her impressive form this week carding a bogey-free 67 (-5) to remain at the top of the leaderboard.

“I feel like I played a bit more solid yesterday, but I feel things have gone my way on both days,” said Broch Estrup.

“I just hung on to the red line on 18 behind the green, and you just have to take those things in golf. I hope to play with a bit more confidence tomorrow and try to play with the mindset of trying to achieve good shots rather than avoid hitting bad shots.

“I feel like I stayed patient today and focusing on hitting the good shots even though I could feel my body tensing up and I wasn’t swinging as free as I would like. I was hanging in there and I’m really happy to get it done in five-under.”

The Dane is in contention for the final day, and it is a position she hasn’t been in for a while, but the 2015 Helsingborg Open champion is hoping to take it in her stride.

She added: “It’s super nice to be competing at the top of leaderboards again and it’s been a while since I’ve been here.

“I’m trying to tell myself that it’s good that I’m feeling this way and it’s because I’m in a good position and that’s where I want to be. I would like to feel a bit calmer, but hopefully I can get there some day again.”

Austria’s Spitz replicated her first round producing another 66 to put her alongside Broch Estrup at Royal Beroun Golf Club.

A bogey on the first didn’t deter the amateur, who is ranked seventh in the world, and she soon rolled in seven birdies to reach 12-under.

“I was nervous on the first green, I didn’t really know how they were going to roll after the rain and if it was going to be much slower so I left it way short and three-putted which wasn’t a great start, but I told myself I could make a lot of birdies coming in and it worked out fine,” said the former UCLA student.

“I’ve played on the LET Access Series before and been near the lead, but this is different, the level is a lot higher, but I’ll just play my own game and see what happens tomorrow.

“I knew coming in that if I played well, I could play with the top players here. I’ve played against a lot of the players in amateur golf so that’s nice, but it’s always nice to see your name at the top of the leaderboard.

Two Czech players are tied for third place with amateur Jana Melichova and LET winner Klara Spilkova just one stroke behind the leaders on 11-under-par.

There's been some great low scores in Beroun today, with home favourites Klara Spilkova and Jana Melichova among those to catch the eye in Prague #RaiseOurGame | #CzechLadiesOpen

Spanish pair Luna Sobron Galmes and Paz Marfa Sans sit in a tie for fifth place on seven-under-par after they both produced second rounds of 69 (-3).

Sweden’s Johanna Gustavsson, Czech amateur Patricie Mackova, who celebrated her 21st birthday, and Spain’s Elia Folch are in a share of seventh on six-under-par.

Three players sit in T10 after 36 holes as Wales’ Becky Morgan, France’s Emma Grechi and Czech’s Sara Kouskova all have a total of five-under-par.

You might also like
Dubai’s Chiara Noja back at the top
In Gee stumbles but clings on to KPMG lead
In Gee stays in charge after equipment change
KPMG: In Gee Chun jumps out to early lead
Five to watch at KPMG PGA Championship
KPMG Women’s PGA Championship doubles purse to $9m
Saudi girls celebrate Aramco podium spot
Dubai’s Chiara Noja skips another event through injury
Abu Dhabi-based 12-year-old wins in Scotland
All the latest news from around the UAE and beyond
Bronte Law triumphs in London