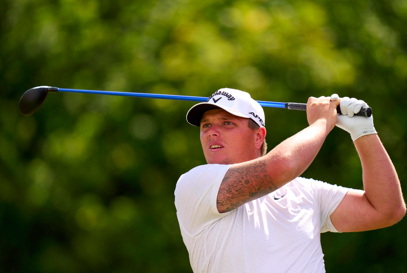 By Matt Smith
Callum Shinkwin and Julien Guerrier will battle it out for the title at the Wales Cazoo Open after an enthralling Day 3 duel at The Celtic Manor Resort saw them both pull well clear of the field, with Shinkwin holding a one-stroke advantage over his French playing partner.

The duo traded blows throughout the day, with Guerrier leading for the early exchanges having entered the weekend two clear, but four birdies on the back nine nudged Shinkwin one shot ahead on 11-under, the Englishman carding the joint lowest round of the week with a six under 65.

Guerrier certainly did not give the lead away, having opened with a birdie and picked up two more before the turn, but his first bogey of the round at the 16th meant he surrendered his place at the top for the first time all day.
A third-round 68, however, left him right in the mix for a maiden DP World Tour title, especially as he sits five clear of third place going into the final day.

Connor Syme was the closest challenger on six under after the Scot picked up three shots in the final four holes to sign for a 68 and move to a five under total, six shots off Shinkwin’s lead.
“I’m delighted, 65 was a really good score today,” said Shinkwin. “I’m playing really well and didn’t make any mistakes and I’ve come out of it with the lead.

“The game has been very good for a long time but it was just a matter of clicking into place. It felt like it was great three months ago but the results weren’t there. Recently I’ve been playing really nicely and had a few pretty good results but not capitalising on how I’m playing.

“I never really paid any attention to what Julien was doing, although he was playing really well, I just tried to make sure I played my own ball and my own game, and whatever I shot I shot and that’s what I did and towards the end I took the lead.”

Guerrier added: “I’m pretty happy, to play under par on this course is always a good thing. Of course it felt a little like a match play, but my main goal was to remain focused on my game. If Callum is playing well that’s not my concern, really good for him of course, but I tried to remain focused on my game and stay in the zone. It’s a long road so we will see what happens tomorrow.”