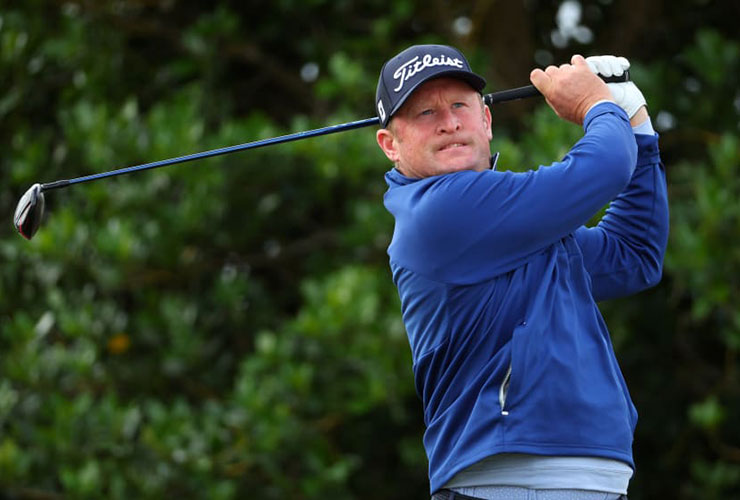 By Matt Smith
Welshman Jamie Donaldson is looking forward to getting back in action on home soil at the DP World Tour Wales Open —now branded the Cazoo Open.

The Welshman finished just one shot out of a play-off at the 2001 Wales Open at Celtic Manor, the same season he graduated from the European Challenge Tour and set in motion a storied DP World Tour career.

He has since claimed three wins, sealed the winning point for Europe at the 2014 Ryder Cup and become a firm fan favourite along the way.

But it all started in Newport and the 46-year-old was delighted to be back at the 2010 Ryder Cup venue.

“It’s big because when I first started playing professionally on the DP World Tour this was one of my first invites to come down here and play and it was fantastic,” he said at Celtic Manor.

“I finished fourth and just missed a play-off by a shot in my second invite in 2001 so it’s great to come back here.

“The ball is running, it’s a bit firmer and faster, the greens are running very well, they’re holding but they’re putting great as well so they’re quite quick.

“Overall it’s in great shape, the rough is up in places, you don’t want to hit it too wide. It’s pretty fair and looking like it’s going to put up a stern test.”

After a spell in the doldrums at the end of the last decade, Donaldson has come roaring back to form, last season achieving his best finish on the DP World Tour Rankings since finishing fourth in 2014.

He missed the cut in his last start at The 150th Open Championship but earned his spot at St Andrews by finishing sixth at the Genesis Scottish Open and is happy with the way his game is trending.

“The Scottish Open was big, I knew I needed to play well to get in The Open,” he said. “I sadly ran out of steam at The Open, that was my fourth week in a row so it didn’t go as well as I planned.

“But the Scottish Open was fantastic, the Irish Open the week before I finished 20th so it was just building nicely, it was a good run of events and hopefully I can take that form into this week.

“I’ve just had two weeks off which was great to spend some time with the family. It was nice to have the rest, be able to go again and get ready for another big run.”

You may also like:
Get the August 2022 edition of Golf Digest Middle East FREE here in English and Arabic
Legend John Daly ‘begged’ for LIV Golf spot
Mickelson was suspended by PGA Tour in March; banned for two years
Mickelson and Dechambeau lead group of 11 LIV golfers suing PGA Tour
Adam Hadwin in trouble with wife Jessica — again
LIV Golf gives to local charities in New Jersey
Bryson DeChambeau on LIV/PGA feud and his $125m signing-on fee
What it is like to be the first woman from your country to win a title
Five players to watch at the AIG Women’s Open
Australian army target more glory in Scotland
Laura Davies’ unique return to Muirfield
Phil Mickelson becomes highest-paid athlete of 2022
WATCH: LIV Golf highlights from Bedminster
Stenson takes debut LIV Golf title at Bedminster
LIV Golf takeaways after third event in New Jersey
The Gulf Club: Latest news from the UAE and beyond up to August 2022
Crocker takes the glory at Hero Open