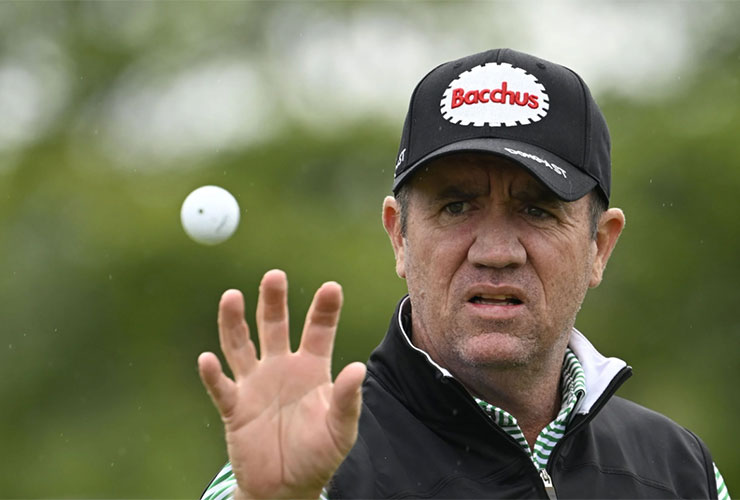 By Matt Smith
Scott Hend is looking to complete his road to recovery in the International Series England at Slaley Hall Hotel this week, with signs he is on the mend after a strong performance in the Netherlands last week.

The Australian has been struggling with injury and illness this season, including a bout of COVID-19 last week.

But now he is looking to get back to the form that has seen him claim 10 Asian Tour tournaments and the 2016 Order of Merit title.

Hend was certainly showing those signs of old at the Dutch Open, where he was one off the lead after the third round before finishing in a tie for 14th. This was after missing the cut in all six events he has competed in on the Asian Tour this year.

My caddie Dave asked me on the 36th hole today…

Hend has been fighting prostrate cancer for over a year, caught the flu a few weeks ago before picking up COVID-19 early last week.

“I have had a lot of injuries this year,” said Hend.

“It’s nice to turn the corner last week, and hopefully start to put some results together. Catching COVID last week wasn’t the perfect formula, but we battled through it. I was lucky I could play because the only symptom I was showing was testing positive. The last six holes every day I was struggling because of a lack of energy. Hopefully we can play good again this week and have a good result.”

The Australian continues to battle prostate problems but has been making good progress.

“It’s a work in progress, it’s a man problem.  As you get older … prostate issues … something that I can control but I can’t control,” he said.

“For a year and a half, urinating blood and struggling to urinate on the golf course is obviously not ideal for playing good golf. I should have been operated on earlier. I had bad information from a specialist, but I saw another specialist and he said do it straight away as you are struggling. Having those sorts of things on your mind doesn’t help.

“It’s been really tough times and I have worked really hard to get back. Certain things became a little bit more important than others. From an outsider looking in you just think it is just someone playing bad golf but there is a lot more to it. Golf is a massive part of my life but so is living.”

Hend last won on the Asian Tour at the 2019 Maybank Championship and is now determined to get back on track.

“I want to finish my career with as many wins as I can. That’s why I am out here, to play and win trophies. I like to think I can be competitive this week and be up there on Sunday.”

You might also like:
Your players to watch at the LIV Golf opener in London
All you need to know for the LIV Golf Invitational Series opener
Dustin Johnson to headline LIV Golf field in London
Stellar line-up set for Newcastle
The Gulf Club: The latest golf news from around the UAE
Meet Malak, the first Arab to play at US Women’s Open
Dubai Golf Trophy: The best weekend
Impossible pin position causes havoc at high school event
WATCH: Dubai golfer’s insane par save
Shiv Kapur hails Asian Tour opportunities thanks to LIV Golf and Saudi Golf
Bland to play LIV Golf, even if it means ban
Rickie Fowler considers LIV Golf options