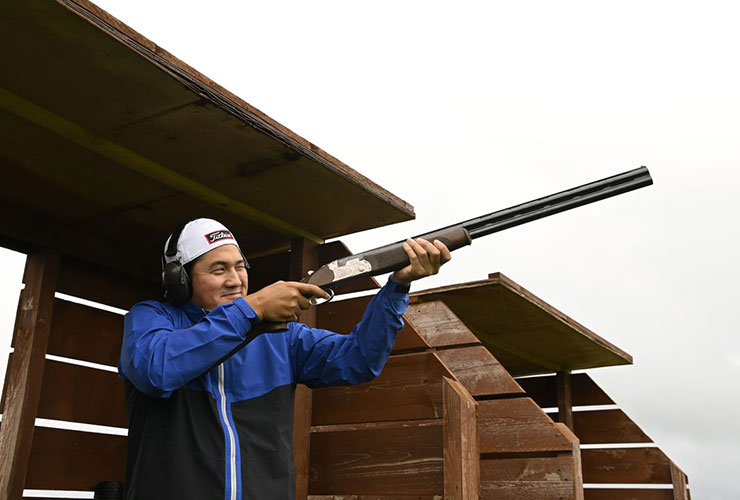 By Matt Smith
Asian Tour No. 1 Sihwan Kim is treating this week’s historic International Series England event like any other as he looks to build on his two victories and Order of Merit lead this season in Newcastle.

“Golf is a funny game,” said the American, who turned professional in 2011 but had been winless until this year. “I won twice this year in four weeks, but I still worry about the same things that I did before I won, so it has not really changed me that much in that sense. It is still a tough game, and I don’t take anything for granted but the aim is always to win.”

He competes in this week’s International Series England at Slaley Hall Hotel, an event that marks the Asian Tour’s first ever trip to the UK.

He added: “It is a very fickle game. I am just trying to enjoy it as much as I can because you don’t know when it is going to go away. I am enjoying it but when golf goes south, I don’t think anyone enjoys it. When part of my game is bad, I try to work on it, and I know it is going to get better and you just keep on grinding.

“As I have said many times before, you have got to get lucky to win. It always comes down to the last one or two shots and when you get that lucky break that’s all that you need. In the years before I didn’t have that, I kind of got unlucky bounces here and there.”

The 33-year-old has competed many times in the UK on the DP World Tour and Challenge Tour over the past 10 years, although it is his first time at Slaley Hall.

“It is good, some holes are a little funky,” said Kim, who took time out to try his hand at clay pigeon shooting on Wednesday.

“You can’t hit driver, you’ve got to hit two iron from the tee and have a four or three iron into the green. But other than that, the course looks good. The cold conditions mess with my yardage a little bit. When it’s cold and damp the ball doesn’t travel as far.”

Kim has been paired with Thailand’s 15-year-old amateur star Ratchanon ‘TK’ Chantananuwat and Scott Hend from Australia, a 10-time winner on the Asian Tour, for the first two rounds and start on Thursday at 7.02am.

You might also like:
Scott Hend on the mend ahead of International Series England
Your players to watch at the LIV Golf opener in London
All you need to know for the LIV Golf Invitational Series opener
Dustin Johnson to headline LIV Golf field in London
Stellar line-up set for Newcastle
The Gulf Club: The latest golf news from around the UAE
Meet Malak, the first Arab to play at US Women’s Open
Dubai Golf Trophy: The best weekend
Impossible pin position causes havoc at high school event
WATCH: Dubai golfer’s insane par save
Shiv Kapur hails Asian Tour opportunities thanks to LIV Golf and Saudi Golf
Bland to play LIV Golf, even if it means ban
Rickie Fowler considers LIV Golf options