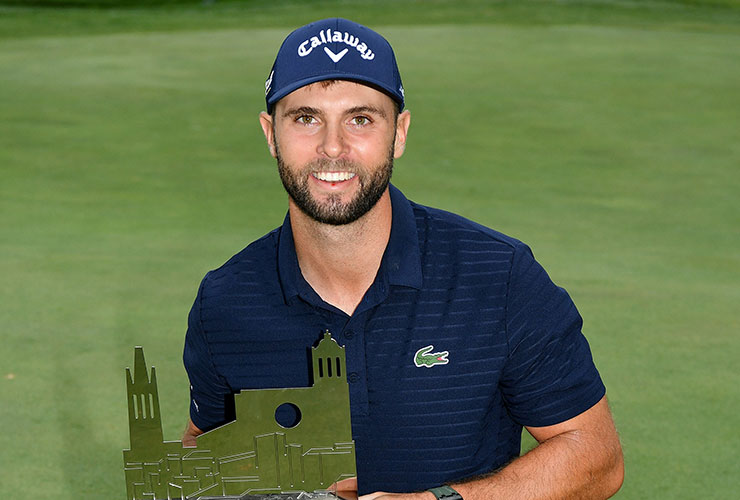 The ceremonial tee shot was enough of a moment to mark the 50th anniversary of the European Tour.

Antonio Garrido sucked up the emotions to seal the occasion. But what was to come made the spectacle all the more fitting.

Following Pablo Larrazabal’s heroics last time out, it was another Spaniard who triumphed as the DP World Tour made its return to ‘home’ turf in Europe. This time around, it was a man from Dubai — the new ‘home’ of the DP World Tour — who was flying the red and gold of Spain on the most momentous of weekends in European golf.

And it was an epic showdown fitting the most memorable battles down the years. Adri Arnaus was the toast of Catalunya and Dubai as he held off Oliver Bekker over six extra holes at PGA Catalunya Golf and Wellness, in Girona, to take top spot in the $2 million event.

Arnaus, who has set up home in the UAE these days, was right at home to emulate the likes of Seve Ballasteros, Miguel Angel Jimenez, Rafa Cabrera Bello, Jose Maria Olazabal and Larrazabal himself to etch his name in history.

You had to feel sorry for Bekker, who fought tooth and nail but came up just short of his biggest pay day.

But all the headlines will be about Arnaus, who clawed back a seven-shot deficit at the turn on day four.

It looked like a two-way tussle beteween Bekker and Laurie Canter before Arnaus caught fire.

A back nine of 31 with the help of an eagle on the 12th set the target at 11-under and an anxious wait ensued as the Spaniard watched Bekker and Canter finish off their rounds.

A three-putt from the South African on the 16th made it a tie as he signed for a 72 while Canter faded, and Arnaus was heading to a third DP World Tour play-off in seven months after defeats at the 2021 Open de Espana and March’s MyGolfLife Open.

Arnaus kept warm on the practice greens and it paid off, eventually.

Five trips back up the last produced reasonably stress-free pars all-round but when they moved to the 17th for the sixth extra hole, Bekker missed the green and could not get up and down, allowing Arnaus to take the title with a par after putting his approach to six feet.

Arnaus came into the week with five runner-up finishes on Tour – two of them on home soil – but now has a win in his 84th start and makes it back-to-back Spanish victories for the first time since 2017 after Larrazabal’s triumph at last week’s ISPS Handa Championship.

Arnaus also moves up to sixth on the DP World Tour Rankings and could move into the top 50 of the Official World Golf Ranking for the first time.

“It’s a dream come true,” Arnaus said 50 years after Garrido’s initial success. “I’ve been looking for this one for a while. To be able to come through here, where I practice in the summers, they take care of me so well. I know the course quite well. I’ve been able to play some really good golf and to do it here is special.

“Sometimes I cheer them on (the spectators), sometimes they cheer me on. It’s a win that we all share together because I’m sure I would not be standing here without them, without my team.

It was a torrid time as he waited for Bekker to finish.

“It was a long wait (for the play-off),” Arnaus added. “I just tried to put a number, hopefully double digits, and I was able to do that. After that it helped a bit (to wait). I was totally calm going into the play-off. Sometimes I have felt a bit rushed in play-offs. This time I felt easy and I tried to play as if it was a play-off. It was good to come out with that mindset, a fresh start.

“It was great, a little bit of a relief. I’ve been chasing this one for a while and I’ve been able to come through here, in my home, with my friends and family watching.