WATCH: Meet Sadhguru Jaggi Vasudev, the Guru of Golf, who is in Dubai on his quest to save the soil 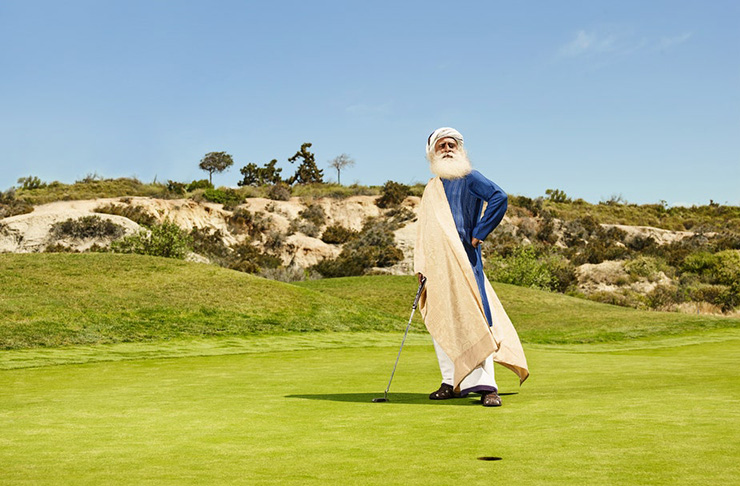 By Matt Smith and Max Adler

Sadhguru Jaggi Vasudev has more than 100 million viewers on YouTube, his clips mostly offering sage advice on some of the deepest questions that trouble the human mind. He travels around the globe offering inner-peace, while also raising awareness for world issues such as education and deforestation. Oh, and the self-described “yogi, mystic and visionary”, who is visiting Dubai this week, is also a passionate golfer.

“When the entire population of the world attains enlightenment, I’ll retire and play golf every day,” Indian yoga guru told Golf Digest, and it’s oddly hypnotic the way his white beard bounces as he laughs. He has to tie it so it doesn’t interfere with his swing. He almost always brings his clubs on the road and eschews carts.

Now the ‘Guru of Golf’ is visiting Dubai as part of his Save Soil campaign, which began in March and will take in more than 25 countries. Sadhguru will talk at Dubai International Convention & Exhibition Centre on Friday at 6.30pm and at the Museum of the Future at 1.30pm on Saturday to raise awareness about the importance of soil in our future and global sustainability.

As Sadhguru continues his quest, he has been visiting major cities around the world, making public speeches and also speaking to politicians — while indulging in his passion for golf where he can.

Sadhguru admits: “I love games, and I’ll play any. Games are a way of training ourselves to be heavily involved without being serious.”

To train for his summer trek in the Himalayas of Tibet, Sadhguru, 64, walked 36 holes a day for several days on a course at an elevation of 6,200 feet in his native India. “By day two or three my game becomes really good,” he told Golf Digest back in 2017. “The best round I ever shot was three-over par. Most of the time I’m between six and 18.” Not bad considering he took up the game seriously around six or seven years ago.

Both events this weekend in Dubai are free but registration is required on Friday and attendees on Saturday must hold a Museum of the Future ticket.