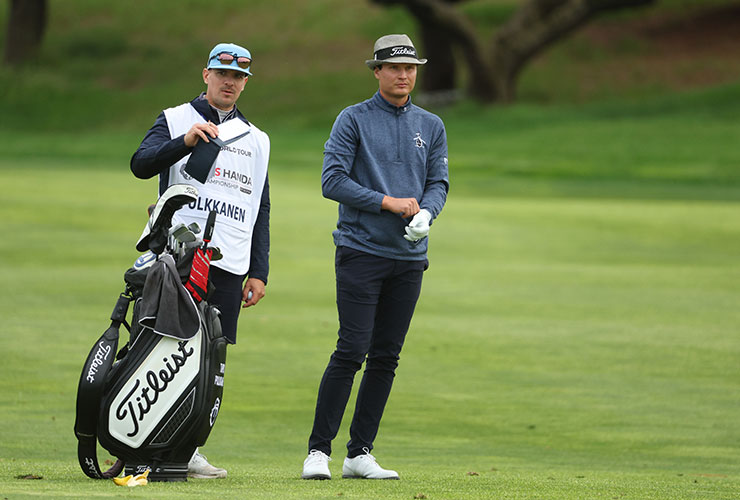 By Matt Smith
Tapio Pulkkanen and Johannes Veerman took advantage of the afternoon conditions at Infinitum’s Lakes Course to share the clubhouse lead on a storm-hit firsrt day of the inaugural ISPS Handa Championship in Spain.

The DP World Tour finally reached Europe for the 2022 season on Thursday for the first of two back-to-back Spanish events, but heavy rain and thunderstorms meant the opening day was delayed for over two hours.

David Law of Scotland posted the low score from the early starters with a five-under 65, but the afternoon groups were treated to more benign and softy conditions and they took advantage before play was halted overnight due to darkness.

Dubai-based Spaniard Adrian Otaegui led the home charge to sit two behind the leaders on four-under, thanks to a six-birdie 66.

Both Pulkkanen and Veerman endured tough starts – with the Finn bogeying his opening hole, the 10th, and the American opening with back-to-back bogeys after teeing off at the first – but they both bounced back in style.

Veerman, a DP World Tour winner at last year’s Czech Masters, birdied six holes on the back nine to sign for a six-under 64, while Pulkkanen birdied two of his final three holes to move into a share of the overnight lead.

South Africa’s Hennie Du Plessis and SSP Chawrasia of India were also on six-under through 16 holes when bad light halted play, while Jack Senior carded a 65 late in the day to join Law on five-under.

“I had a pretty slow start, bogey-bogey, and I thought maybe this isn’t so good a day, but I made two more birdies coming in to make the turn and then I just lit it up on the back nine — putting really hot and hitting it really good,” said Veerman.

“This golf course, you have a couple of tough holes out here but you have a lot of wedges, so if you can put it in play off the tee — because the rough is so long — you can really get it close because you have short clubs in your hands. We’ll see how we go tomorrow but I’m going to go back, get to bed early and go again.

“I came through Qualifying School here in 2019 so I only have good memories about this golf course so it’s nice to come back and play well again. I lit it up in the last four rounds after making the cut on the number, so I have some really nice memories around here.”

Pulkkanen added: “I have played 50 rounds here before because my national team used to come and practise here, so it’s almost like a home course. I just hit it solid and made some putts.

“I think the greens softened up a lot after the rain so that made it easier. The greens on Tuesday were quite tough and then they were slower after the rain. The rough was wet so you want to be on the fairway but my driving was really good so I didn’t need to worry about the rough and that helped a lot.

More
Morikawa can’t stop dunking from off the green
Highlights from Day 1 of Zurich Classic
DP World Tour heads back to where it all began 50 years ago
Is Ash Barty aiming for a shot at a golf career?
Your Zurich Classic tee times
Our 11 favourite teams at Zurich Classic
Report: First PGA Tour player request to play LIV Golf events
LIV Golf ready to go live as tickets go on sale
WATCH: Dylan Frittelli in bizarre rules gaffe