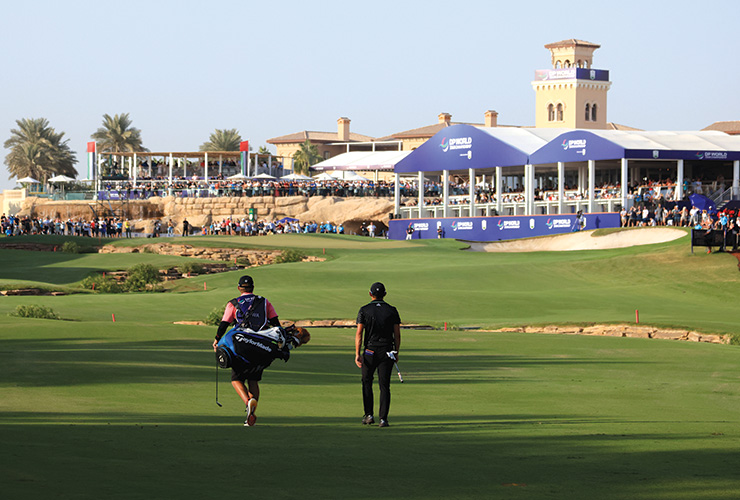 Now is time for the UAE to nurture its own talent and let them blossom on the biggest stages.

The recent announcement by the DP World Tour to continue to invest in the future of golf in the UAE comes with a guarantee the growth of the game is in safe hands for the forseeable future, and the UAE is ready to come out swinging.

In April, the DP World Tour announced a long-term partnership with the Emirates Golf Federation until at least 2031, continuing the tour’s commitment to developing golf in the UAE from the grassroots up. And we are now ready to take the game to the top level.

This is a relationship that goes all the way back to pretty much the beginning of golf in the UAE, and it continues to prosper.

The Emirates and the European Tour Group, which incorporates the DP World Tour, Challenge Tour and Legends Tour, have had a long-standing relationship with the UAE, going all the way back to 1989, when the first Dubai Desert Classic was played at Emirates Golf Club (pictured below). 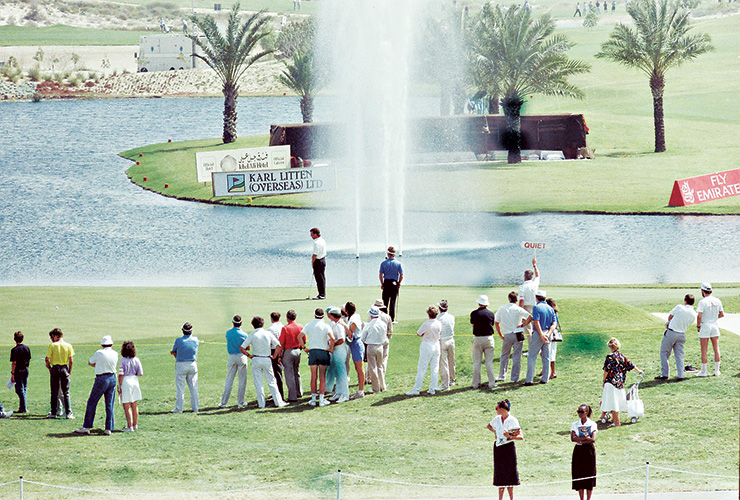 The ball was rolling. Both the UAE and the game of golf in the region then went off to scale unfathomed heights, with more than 20 top-class golf courses helping transform the landscape of the nation in the years to come, offering green oases amid the skyscrapers. The sport itself exploded on to the global map as the best players came to town. 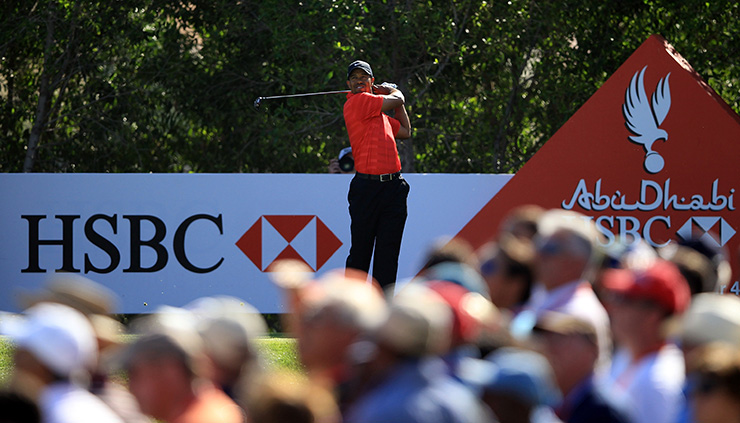 Since then, the European Tour group has enjoyed an enduring relationship with the UAE, which was underlined when DP World, the Dubai-based supply chain and logistics solutions provider, came in to sponsor the season-ending competition at Jumeirah Golf Estates and then in November last year as the title sponsor of the group’s main tour.

This season, the UAE will host at least five DP World Tour events, including the inaugural Ras Al Khaimah events that made up part of the historic four-week ‘UAE Swing’ in January and February.

This is a far cry from, not too long ago, the no-grass events that we used to associate with desert golf. 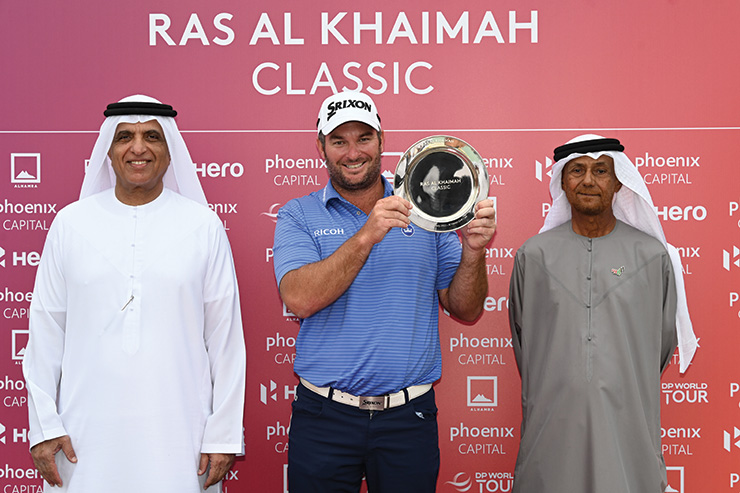 Going forward, we will now see a minimum of two Challenge Tour events in the UAE each year from next season, alongside at least five DP World Tour tournaments, with the focus on giving Emirati and locally based golfers.

Not only will this give the nation more exposure as the go-to destination for golfers, it also presents opportunities for our homegrown best to play against some of the finest in the world and allow them to forge their own careers in the game.

Along with helping enhance the careers of top players such as Henrik Stenson, Rory McIlroy and Rafa Cabrera Bello, to name a few of the many players who have set up home here, the expansion has allowed our very own stars such as Toby Bishop, Josh Hill and Ahmad Skaik emerge as real hopes for the future. 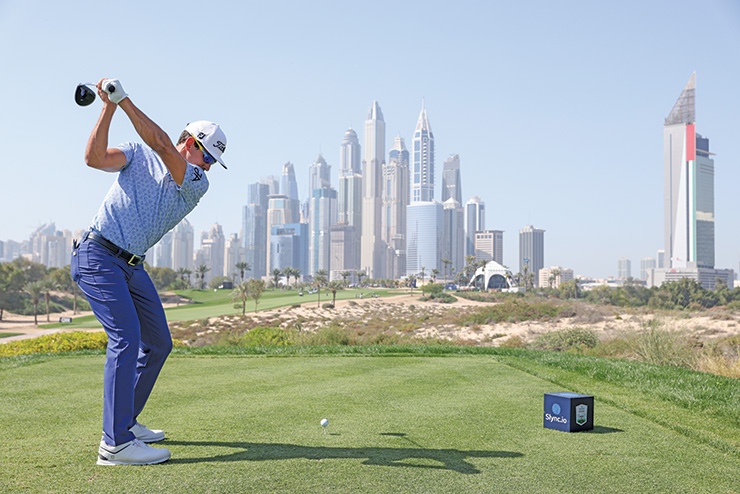 The Slync.io Dubai Desert Classic has become a mainstay of the UAE golf scene. Getty Images

One of the most refreshing aspects of last week’s announcement was the expansion of the Tour’s support of junior golf development in the UAE to enhance grassroots and player performance programmes, paving the way for future Bishops, Hills and Skaiks.

It is an exciting time and all involved are keen to see the results.

“The DP World Tour committing to a 10-year partnership with the EGF is fantastic news for golf in the Middle East,” Daniel van Otterdijk, Chief Communications Officer of Group Communications at DP World, told Golf Digest Middle East. “It will assist in creating playing opportunities as well as a pathway towards the highest echelon of the sport for our Emirati golfers.

“One of DP World’s key objectives in our partnership with the Tour is to help grow golf at grassroots level, and in doing so we are adding at least two UAE-based Challenge Tour tournaments per year, with 30 entries being granted for EGF members.

“The Challenge Tour has a spectacular history with the Middle East, with several of its previous season finale events being held in Dubai, Oman and Ras Al Khaimah in 2013, 2014 and 2015, so it is excellent news that the region will continue to be a hub for all of the best up and coming golfers that we can only hope are destined for the DP World Tour.

“While we toast the expansion of the game in the UAE, we are also seeing results on the practice greens as the likes of Josh Hill, Toby Bishop and Ahmad Skaik emerge as real contenders. 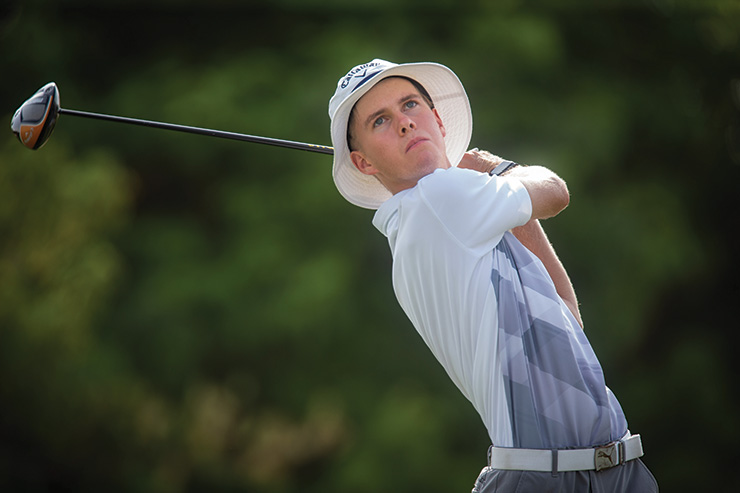 “Everyone in this region is rooting for a UAE golfer to compete on the DP World Tour,” said Van Otterdijk. “The EGF has worked thanklessly over the years to help to develop the talents of Khalid Yousuf, Rayhan Thomas and the latest gems: Josh, Toby and Ahmad. We truly hope it won’t be too long before one of these talented young men are competing and winning on the DP World Tour. Opportunities to play on Challenge Tour events will be wonderful for their development, and allows us an opportunity to see how the best golfers in this region fare on the big stage.

Skaik himself, the UAE’s no.1 golfer and Englishman Hill have competed in numerous DP World Tour events such as the Slync.io Desert Classic and the Abu Dhabi HSBC Championship, impressing both local and international fans alike, so it will be intriguing to see them compete on other courses in the region on the Challenge Tour. 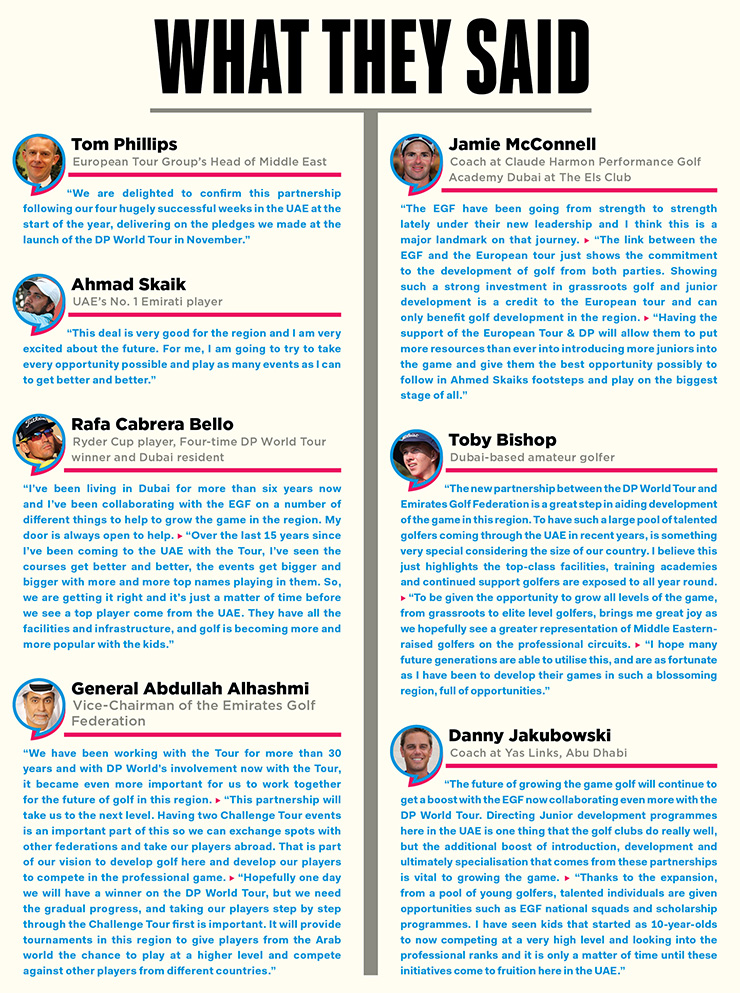 The UAE has helped forge careers from Ryder Cup Captain Henrik Stenson and former world No. 1 Rory McIlroy all the way through to Hill, Bishop and female pros Chiara Noja and Alison Muirhead. But it does not stop here. Van Otterdijk explains the vision for the future:

“Dubai has a rich history of golfing icons that have lived here from Henrik to Thomas Bjorn to Rafa and Rory to name a few. There is no better place in the world to live as a golfer — you are able to practise all year round on exceptional courses, whilst having access to world-class training facilities. With the addition of the two Challenge Tour events for 30 EGF members each season, the UAE has got to be one of the best places to grow and nurture a young golfer with the ambition to one day compete on the DP World Tour.”

Get in the groove: eGolf Megastore helps make the game simpler for all, thanks to ground-breaking technology and new store

eGolf Megastore helps make the game simpler for all, thanks to ground-breaking technology, some lucky breaks, oh, and a huge new store in Al Quoz