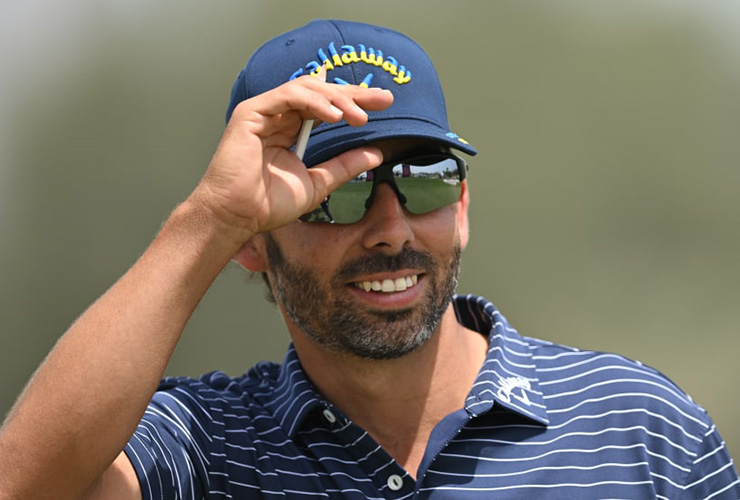 By Matt Smith
Pablo Larrazabal has been flying high this season and is hoping some home comforts after a chance to recharge the batteries will allow him to reach greater heights.

The Spaniard burst on to the scene in 2008, bouncing around the fairways with a grin on his face and claiming the Open de France in his maiden season on the European Tour and winning Rookie of the Year. He has been a mainstay ever since, turning heads once again right here in the UAE when he claimed the 2014 Abu Dhabi HSBC Championship, holding off the might of Phil Mickelson and Rory McIroy to triumph.

He may be older and wiser now at 38, but that grin is still there as he looks to add the ISPS Handa Championship to his haul of titles this week in his home country of Spain.

The Spaniard has been in excellent form this year, winning his sixth DP World Tour title at the MyGolfLife Open in South Africa in March and followed that up with a T-5 at the Qatar Masters before a well-deserved three-week break.

Fully refreshed, Larrazabal is now ready to pick up where he left off during a four-week stretch in Europe, beginning with back-to-back events in Spain.

“I am ready to go,” he said ahead of the ISPS Handa’s debut on the DP World Tour. “I have been playing great, been practising great at home. There is nothing wrong with three weeks at home. To keep the momentum, you have to keep working and keep the routines going. That is all about preparation.”

After a disappointing 2021 campaign dropped him way down the OWGR standings, Larrazabal has certainly recaptured that form that made him the darling of the crowds over the past decade, climbing back up to No. 109 in the world (he was once as high as 53) and that familiar bounce has returned.

“As a professional golfer you have to realise that you are an entertainer,” he told DP World Tour. “You are a sportsman but mostly we are entertainers. The first year to 16 months of golf during the Covid-19 pandemic were tough. As I said to you, I am an entertainer of people, and we were not doing that. We played 16 months with no crowds and that didn’t help my golf, my attitude at all. To play for money is not the way I play golf nowadays.”

The Tour is back 🙌

Now, despite growing up in nearby Barcelona, the 38-year-old is set for his first competitive round at Infinitum’s Lakes Course — venue of this week’s event.

“Today is my first nine holes out here,” he said after a debut practice on the course. “I came here four years ago to see a couple of friends on the last day of the Final Stage at Qualifying School. Those are my only two days at this course. But after nine holes you realise how good this golf course is and the conditions are brilliant. Hopefully the rain stays away from here so that we can see how good the work is of the groundsmen.”

Water is an undeniable feature of this week’s course in Tarragona, but that is not something that is set to faze Larrazabal.

“There are a lot of lakes, but you guys know me,” he said, that trademark grin creeping into view once again. “I have been on tour for 15 years; I didn’t come here for holidays and to make business you have to make birdies. Birdies are going to bring you trophies. That is why we came and that is how I play golf.”