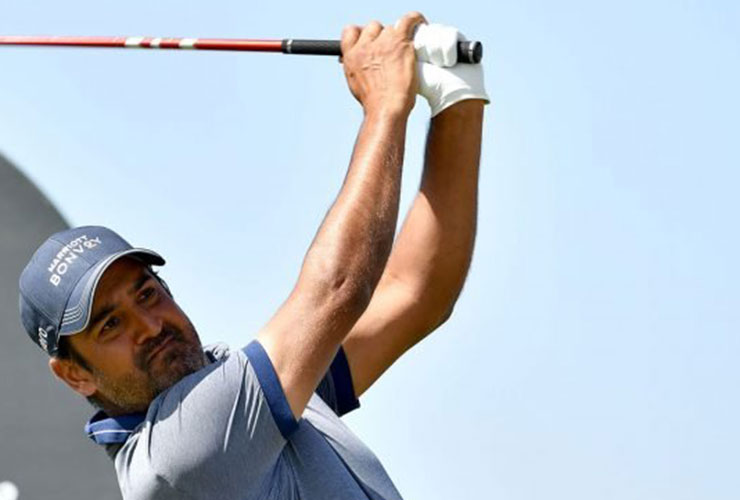 By Matt Smith
History was made on Thursday as the International Series England teed off at Slaley Hall outside Newcastle — the first Asian Tour event in the UK.

Chinese-Taipei’s Chang Wei-lun upstaged a stellar field to take the first-round lead with a six-under-par 65.

Kapur shot a blemish-free four-under days after he urged his fellow Asian Tour players to revel in the opportunities they now have, thanks to Saudi investment in the game

Little-known Chang, a winner on the Asian Development Tour (ADT) in 2017, birdied his last three holes — after a handy tip. “My family gave me some advice before I flew here,” said Chang. “My grandfather is a professional golfer, and my uncle is a coach. They told me the first and third days are the most important. So, I was just trying to stay focused out there. They told me to just play consistently.

“Coming into this week, I wasn’t thinking too much. I have been playing well this season, but I know I can do better. The weather was much cooler than I expected. I was actually more concerned about the weather, so I prepared myself for bad weather conditions, but today’s condition is actually not too bad.”

Six-time Asian Tour winner Jazz said he has really benefited from catching up with his coach Pete Cowen this week.

“My game is getting better, training the right way since beginning of the year. Hitting good, just waiting for the scoring to come back,” said Jazz.

“I haven’t seen my coach Pete Cowen much. I saw him in Dubai but that was a while ago, and I saw him at the British Masters, and he is here this week with G-Mac [Graeme McDowell] so it has been really great, as obviously it’s just me and G-Mac so I can have as much time with him as possible.”

American Sihwan Kim, who currently leads the Asian Tour Order of Merit, started well with a 70, while playing partner Ratchanon ‘TK’ Chantananuwat, the 15-year-old amateur sensation from Thailand, shot a 71.

You might also like:
Analyzing the 42 players who have signed up for LIV Golf
LIV Golf: All you need to know
Your top players to watch at LIV Golf Invitational
DJ to headline LIV Golf Invitational
Rory McIlroy says LIV Golf players should not be punished harshly
PGA players defend jump to LIV Golf Invitational
Looking back at the Dubai Golf trophy with captains and players
Bland to play LIV Golf, even if it means ban
Rickie Fowler considers LIV Golf options
Shiv Kapur hails Asian Tour opportunities thanks to LIV Golf and Saudi Golf
The Gulf Club: The latest golf news from around the UAE
Meet Malak, the first Arab to play at US Women’s Open