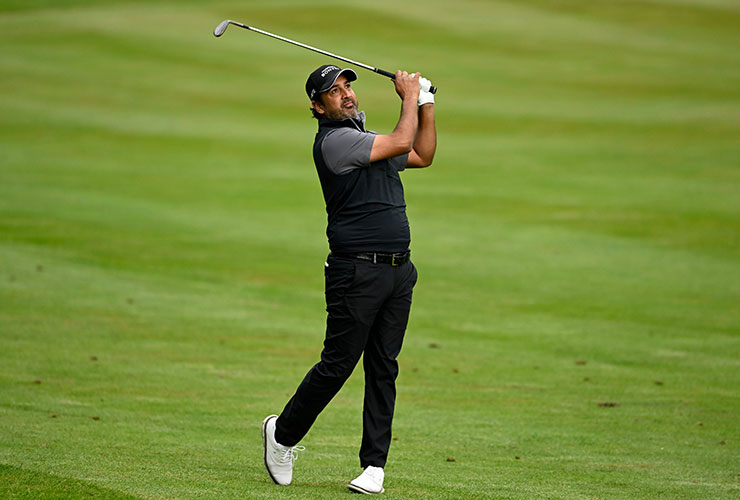 By Matt Smith
Dubai-based Indian Shiv Kapur kept up his challenge at the Asian Tour International Series England at Slaley Hall on Friday, with a second-round 70 that took him to five-under for the tournament, one off the clubhouse lead held by South African Justin Harding and South Korea’s Joohyung Kim.

Harding shot a tremendous 66 in difficult conditions just outside Newcastle in a historic event — marking the Asian Tour’s first ever tournament in the UK.

As the golfers push for glory and a slice of the $2 million purse, there is also the added incentive of the top five golfers booking a place at next week’s money-spinning LIV Golf Individual Series opener at Centurion Club, just outside London.

Before the afternoon starters headed out, Kapur was tied-third alongside Zimbabwean Scott Vincent — who arrived in Newcastle after a 24-hour journey from Japan, without his clubs — and Japan’s Kosuke Hamamoto. While Kapur and co looked on from the clubhouse, no one could catch Harding and Joohyung, with South African Neil Schietekat, Thai pair Kosuke Hamamoto and Kasidit Lepkurte, and Chang Wei-lun from Chinese Taipei joining Kapur on one-under ahead of the third round.

You might also like:
Shiv Kapur revels at Asian Tour event
Fowler ‘keeps options open’ on LIV Golf
Analyzing the 42 players who have signed up for LIV Golf
LIV Golf: All you need to know
Your top players to watch at LIV Golf Invitational
DJ to headline LIV Golf Invitational
Rory McIlroy says LIV Golf players should not be punished harshly
PGA players defend jump to LIV Golf Invitational
Looking back at the Dubai Golf trophy with captains and players
Bland to play LIV Golf, even if it means ban
Rickie Fowler considers LIV Golf options
Shiv Kapur hails Asian Tour opportunities thanks to LIV Golf and Saudi Golf
The Gulf Club: The latest golf news from around the UAE
Meet Malak, the first Arab to play at US Women’s Open