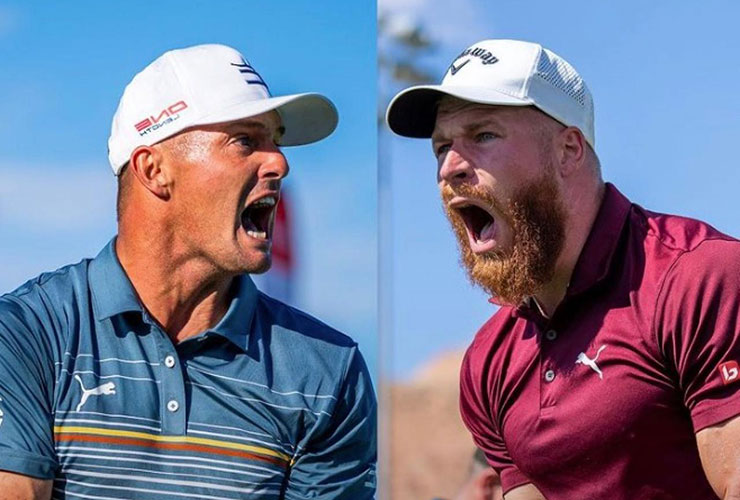 By Tod Leonard
Thanks to Bryson DeChambeau, it was a show that the long drive world has never seen before and might never experience again.

Against sizeable odds because he was going up against guys with freakish swings and ball speeds that reach 230mph, DeChambeau nearly pulled off a win on Saturday that he probably would have coveted as much as his US Open title.

The man who led the PGA Tour’s most recent chase of driving distance before moving this year to LIV Golf reached the two-man final of the Professional Long Drivers Association’s World Championships. And, in a stunner, he came within one swing and 20 yards of holding the gaudy WWF-style title belt.

Going head-to-head in the final against German Martin Borgmeier in Mesquite, Nevada, after the field was whittled from 16 to two on Saturday, DeChambeau found the grid with three of his six allotted drives and topped out at 406 yards. But Borgmeier, whose heavy beard, very short shorts and antics would make him perfect for professional wrestling, pounded his third ball 415 yards and followed that up with a 426-yarder that proved to be the winner.

In the fading desert light, an exhuberant Borgmeier bear-hugged DeChambeau, accepted the belt and held it aloft while running a winded victory lap around the driving range. He kissed and hugged his wife and young son, and then took the mic and pointed at DeChambeau.

“There is one very, very important thing, and all of you guys know,” Borgmeier said. “I would not be here, none of us would be here with the improvements in technology, if one guy wouldn’t have come in a year ago to make the sport what it is right now. And I think he’s on a very good track to come back. And that guy is Bryson DeChambeau.”

Now yelling, Borgmeier added: “He also came in second. What is going on? That guy is a professional golfer and he’s putting up these ball speed numbers … he lights it up in the final, hitting 400 plus! No one has ever done that before. People don’t realise how crazy that is,”

DeChambeau, who didn’t speak afterward on the YouTube broadcast that carried the event, smiled and nodded appreciatively to Borgmeier.

It was a year ago that DeChambeau entered the PLDA World Championships in what seemed like a sideshow act. But then he made the final eight and finished seventh — coming off playing in the Ryder Cup — and it wasn’t a joke anymore.

This year, DeChambeau returned to Mesquite after a rather tumultuous year that started on the PGA Tour and ended with him moving to LIV.

DeChambeau clearly didn’t care about the $50,000 first prize in the long drive. It was about the bragging rights.

There were 128 contestants who started this week in the Open Division, and DeChambeau easily got through to the top 32 in the round-robin competition that awards points for where the golfers finish in each session.

DeChambeau went down to his last ball to qualify for the Round of 16 and then finished fifth among the final eight with a top drive of 415 yards. Among those who didn’t make it that far was two-time defending champion Kyle Berkshire, who finished ninth in his return from hand surgery just over three weeks ago.

There were still some of the sport’s biggest names left, including last year’s runner-up, Justin James, and Zack Holton, who had pounded the day’s longest drive of 435 yards in the Round of 16. DeChambeau ended up against those three in the final four, and when he blasted a drive 407 in the semifinals, he earned the shot at facing Borgmeier, who advanced with an effort of 418.