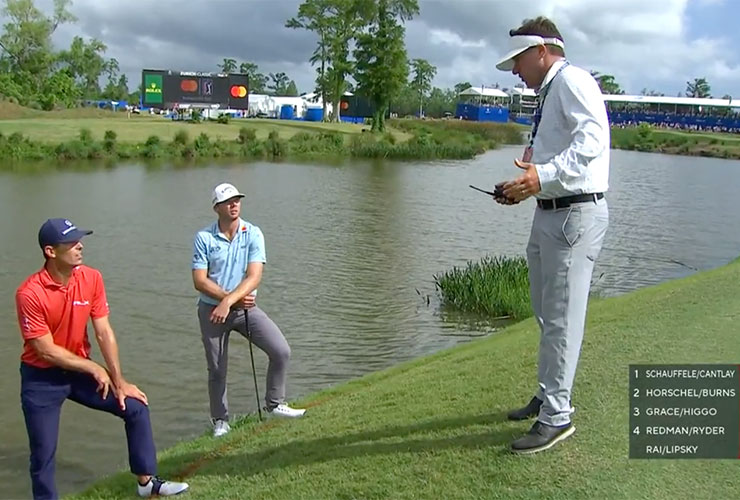 By Ryan Herrington
Two shots back of Patrick Cantlay and Xander Schauffele with three holes to play at the Zurich Classic of New Orleans, the team of Sam Burns and Billy Horschel decided to get aggressive on the drivable par-4 16th at TPC Louisiana. The reward of trying to convert a potential eagle putt was worth the risk of possibly hitting it into the water guarding the front and left side of the green on the 299-yard hole.

When Burns tugged his drive into said water, it created another decision of sorts: Where exactly did the ball cross into the penalty area?

A discussion ensued between Horschel, Burns, Jason Day (who was playing with Jason Scrivener in the same pairing) and an on-site rules official. Horschel believed that the ball hit the bank before bounding left into the water, which TV replay confirmed. The question, though, was whether the ball hit outside the red line marking the penalty area, in which case Burns and Horschel could take their drop beside the green, roughly 30 feet from the hole? Or did it land inside the red line, in which case Burns and Horschel would have to take a drop farther back toward the fairway, at least 50 yards from the green?

The PGA Tour posted a video of the discussion on Twitter.

Unfortunately, the angle of the TV replay did not show specifically where the ball landed, either. Because of that, in consultation with head rules official Gary Young, it was determined that given the information Horschel and Burns had and using their reasonable judgement, they could drop beside the green as if the ball did bounce outside the red line.

From there, Horschel played his third shot to two feet of the hole and Burns rolled in the par putt.

Still within two shots of the leaders, Horschel had the tee on the par-3 17th but proceeded to overcook it. He and Burns wound up making bogey on the hole to fall three shots back, essentially ending their bid at victory.

After the round, Horschel and Burns, who finished the day with a four-under 68, talked more about what happened.

Billy Horschel and Sam Burns discuss a drop after their tee shot finds the water on No. 16. pic.twitter.com/4kYXbSscdv

“So, from where we were, Sam pulled his drive a little bit and it was coming back,” Horschel said. “Conversation was did it land above the red line? Well, I saw a ball land and bounce. From the tee box and everything, you really can’t see the red line.”

Horschel then continued: “It’s going to take a couple bounces. From what I saw and not being able to see the red line and where the red line was, I couldn’t see below that from the tee box when I got up there, so I figured that ball had to land up on top of the red line. We asked TV and everything, and TV didn’t have clear-cut evidence. Travis, [Burns’] caddie, saw the ball bounce.

“I’m one to play it safe, but I was pretty confident that ball landed above the red line.”

More
Greg Norman rejected by R&A for Open Championship
Morikawa can’t stop dunking from off the green
DP World Tour heads back to where it all began 50 years ago
Is Ash Barty aiming for a shot at a golf career?
Our 11 favourite teams at Zurich Classic
Report: First PGA Tour player request to play LIV Golf events
LIV Golf ready to go live as tickets go on sale
WATCH: Dylan Frittelli in bizarre rules gaffe