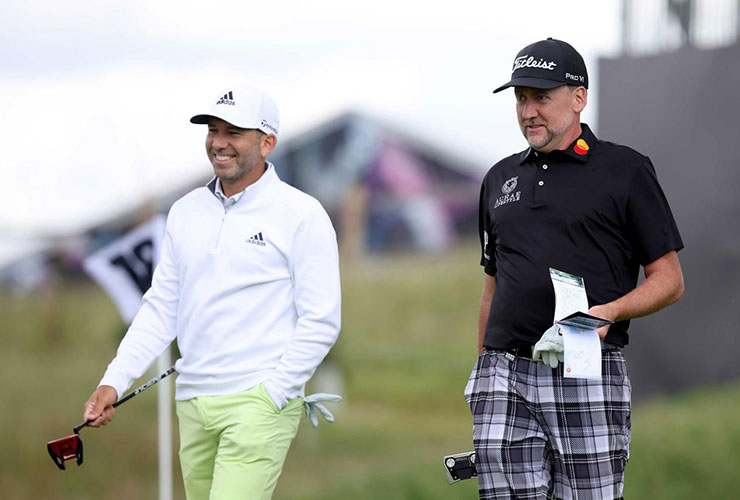 Sergio Garcia and Ian Poulter are among 19 players from LIV Golf listed in the field for the DP World Tour’s BMW PGA Championship. LIV Golf

By Ryan Herrington
The message sent by the PGA Tour to those who play on the LIV Golf circuit has been clear for the outset: leave and face suspension. On the DP World Tour, however, the situation is more muddied. The former European Tour’s bylaws don’t allow for such clear punishment, and an initial fine and suspension of defectors for three summer events (each notably co-sanctioned by the PGA Tour) was temporarily blocked by a UK arbiter.

So it is that a smattering of LIV golfers have played DP World Tour events this summer: Ian Poulter and Laurie Canter were the latest examples, each posting T-23 finishes last Sunday at the Czech Masters. Meanwhile, for the upcoming BMW PGA Championship, the DP World Tour’s flagship event played next to tour headquarters at Wentworth Club outside London, it will be more than a few playing. Currently, 19 golfers who have competed in LIV events are listed in the field.

If awkward is the word that comes into your head, you’re not alone.

“It’s going to be odd seeing certain people at Wentworth,” said Matt Fitzpatrick, an eight-time tour winner who is third on the DP World Tour’s season-long points list. “That is going to be a bit weird, and obviously, it’s a little bit disappointing.”

Rory McIlroy, the top-ranked player on the DP World points list, will also be playing in England, competing in the BMW PGA for the first time since 2019 (he won the event in 2014). Other notable PGA Tour/DP World loyalists playing are Jon Rahm and Billy Horschel, who a year ago became the first American to win the event since Arnold Palmer in 1975.

As for the LIV golfers, the number includes four players (Na, Gooch, Kokrak and Reed) who qualified based being inside the top 60 in the World Ranking. For them, competing in the event is critical for maintaining that ranking, since LIV Golf events don’t offer World Ranking points. A high finish at Wentworth will help keep them from sinking lower and thus playing their way out of exemptions into major championship and other high-level tournaments around the world.

The BMW PGA also is the first event where European golfers can earn points to qualify for next year’s Ryder Cup. While the PGA of America has said that Americans who are not members of the PGA Tour (and by extension not members of the PGA of America) will not be eligible to compete in Italy in 2023, whether LIV golfers who were former DP World Tour members will be prohibited from playing is also unclear — Henrik Stenson was removed as Team Europe captain before competing in his first LIV Golf event at Bedminster, a competition he won.

“It’s going to be interesting to see what happens,” Fitzpatrick said. “Obviously, they’re [the DP World Tour] not quite in as strong a position as the PGA Tour are in terms of regulations. I guess we’ll just have to see how it plays out

According to a Golf Channel report, LIV players will still receive some punishment for attempting to competing at Wentworth, each being given a six–figure fine.

The LIV golfers will be arriving at Wentworth for the September 8-11 tournament off playing in the LIV Invitational Boston event the previous week, September 2-4.

The overall purse for the BMW PGA is the richest of any regular-season DP World Tour event, with $8 million up for grabs.