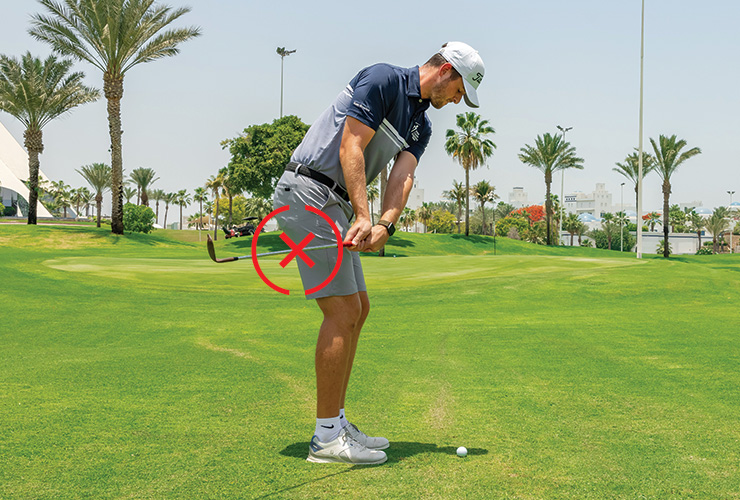 By Euan Bowden
Controlling the strike in your short game is essential in building your confidence around the greens. It will then lead to greater distance control and ultimately getting up and down more often.

Here at the Peter Cowen Academy, we see a lot of people treating their short-game move too similar to their long-game move. It is still considered a movement and therefore we never want to restrict somebody, however, it is certainly a quieter movement than that of long game. We often see our clients who struggle with their short game having a lot of drive with their body, and pulling of the club, coming in the downswing as opposed to using the natural forces of the club moving through the ball.

To do this we want to see the club head moving back more in line with the hands when the shaft of the club reaches parallel to the ground and from there it can work more underneath our hands through the ball with little compromise. However, we often see the club head rolling behind the hands and then golfers using forces within their body, manipulating the club back to the ball, often steepening the club, allowing the hands to get too far in front of the ball and compromising the strike.

With the short game, we would like to keep the movement as simple as possible to the point where we get a nice solid set-up. We let the arms take the club back, the club comes back to the ball (natural forces/weight of the club so there is no pulling on the club) and then the body turning will support the club through to finish. Typically, we will see the body being quieter until after the hit but please make sure it is still a movement through the ball.

To better strike your short-game shots, hit some balls where you swing back and stop, with the shaft parallel to the ground and the club head in line with your hands, using a mirror or camera to give you feedback to make sure you hit this position. Feel the club head starts the downswing first towards the ball and let your chest then take the club through to finish. You should feel your lower body being much quieter than normal. This is very much a technical exercise to build a feeling so I would not do this towards any target to begin with, the focus should be on the movement as opposed to the outcome of the shot. Then you can start to build this feeling into a movement with nice rhythm to take on to the course.

To help control that strike with your short game, look to get the club back more in line with your hands in the backswing, use the natural force of the club to get back to the ball and then use your chest to support the club through to finish.

More golf tips and instruction:
It is never too late to pick up a club for the first time — some tips to get started
Mobility and stability are key links in the chain to golf fitness
The chips are down if the hips are right
Looking for more power? It’s all about kinetic sequence forces
Understand golf’s power chain and how to avoid a weak link in your swing
Why solid putting starts with a sound set-up
Alignment is a fine balancing act to stabilise clubface
Why you are wasting your time on the range
Claude Harmon III’s simple impact drill
How Billy Horschel’s simple back swing move will make you a better ball-striker

WATCH: LIV Golf highlights from The International near Boston as Dustin Johnson gets back in winner’s circle at last

WATCH: Highlights from Day 2 of LIV Golf Invitational Series — Boston as Gooch gets ahead

WATCH: Korn Ferry twins pull off switcheroo on their playing partners during pro-am