WATCH: Korn Ferry twins pull off switcheroo on their playing partners during pro-am 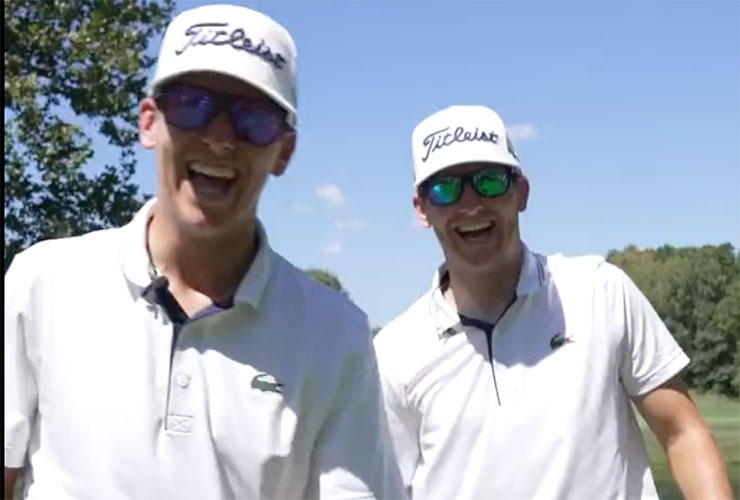 By Alex Myers
Pre-tournament pro-ams might be a professional golfer’s least-favourite part of the gig. You usually spend five-plus hours giving golf tips to strangers, feigning compliments to weekend hackers, and repeatedly answering if you’ve ever met Tiger Woods. But a pair of twin brothers found a way to make this week’s experience more entertaining for themselves — by pulling off the old switcheroo.

That’s right, Jeremy Paul and Yannik Paul traded places in the middle of their round with a group of unsuspecting golfers. And no one seemed to catch on. Check out the funny video released by the Korn Ferry Tour:

Of course, a lot went into successfully pulling off this prank. For one, they dressed identically. (Although different-coloured socks could have given them away). Second, they’re both great golfers. (Although, Yannik kinda hacked it up while using his brothers’ clubs.) And third, Jeremy provided info on the group, specifically that “Randy” had made a couple clutch six-footers in a row for the group. (You go, Randy!)

Oh yeah, and, again, they’re identical twins. It would be tough to get away with this trick if not for that.

Anyway, nicely done by the Paul brothers, who hail from Germany and are both teeing it up at this week’s Korn Ferry Tour Championship. But if only one of them makes it to the weekend, rules officials might want to make sure it’s the right one actually playing each hole.

WATCH: LIV Golf highlights from The International near Boston as Dustin Johnson gets back in winner’s circle at last

WATCH: Highlights from Day 2 of LIV Golf Invitational Series — Boston as Gooch gets ahead