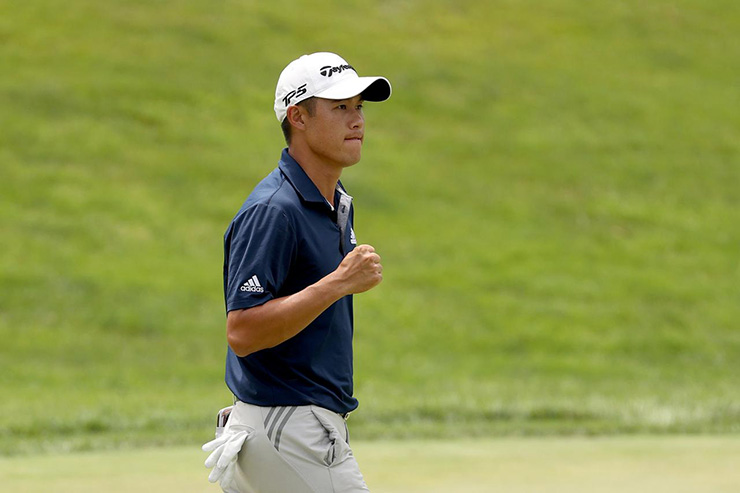 By Christopher Powers
Perhaps more than any other sport, golf went on just fine without fans when it made its return in June. In fact, at times it seemed like a better viewing experience without the galleries, particularly at the Masters, where we got to see angles and corners of Augusta National usually hidden by the mass of patrons on the grounds.

But we’d all be lying if we said we didn’t miss the fans a little. OK, maybe even a lot. What would Jordan Spieth’s bunker hole out at the 2017 Travelers Championship have been without the crowd’s reaction? Or Patrick Reed and Rory McIlroy’s intense singles match at the 2016 Ryder Cup? Or Tiger Woods’ triumphant comeback victory at the 2019 Masters? The fans bring an energy that elevates moments like those to a completely different level, and we lost out on that a number of times during the PGA Tour’s restart.

To highlight just how dearly we missed the roars, we selected 10 moments from the PGA Tour restart that would have been that much better with fans on hand and being heard. And, of course, we ranked them, because that’s what you do on the Internet in 2020.

RELATED: Our 2020 Newsmakers of the year

10. Jim Herman’s approach into the 72nd green at the Wyndham Championship

Go ahead, laugh it up. But don’t tell us this wouldn’t have been a wild scene at the 72nd green at Sedgefield Country Club. Jim Journeyman Herman charging up the leader board with a 61-63 run on the weekend, capped off by this roped, 207-yard 5-iron to 10 feet? The place would have been going bananas. Never mind that he missed the final putt, the same putt Billy Horschel would go on to miss with a chance to force a playoff. This final approach, complete with Herman putting his hands on his hips for some reason as he stared it down, was one of the shots of the restart. Making it that much sweeter was the fact he looked more nervous trying to drink from a water bottle as he watched the final groups come in:

This man deserved a standing O for that weekend performance. A shame no one was there to witness such greatness.

On a beautiful Summer Friday at TPC Boston, Scottie Scheffler went out in the morning and damn near burned the place to the ground, joining the elusive 59 club. Hours later, Dustin Johnson was threatening to make Scheffler’s 59 old news. DJ was an astounding seven under through five holes, then eight under through seven and nine under through eight. When he birdied 10 and 11 to reach 11 under through 11 holes on the par-71 course, 59 felt inevitable, and a 57 or 58 seemed in the cards. Somehow Johnson wound up parring in to shoot the most disappointing 60 in golf history. Sadly, we can only imagine the constant roars that would have echoed through the property with each Scheffler and DJ birdie that day.

RELATED: Tiger Woods on son Charlie: ‘He’s a little on the chirpy side’

8. Sergio Garcia’s approach into the 72nd green at the Sanderson Farms

Despite his many misgivings, Sergio Garcia is still a fan favourite. Nowhere would that have been more evident than at the Country Club of Jackson, host of the Sanderson Farms Championship, which does not exactly boast a strong field year in, year out. This year was much different for a number of reasons, and because of the circumstances some marquee names made the trip to Mississippi, including El Niño. He went on to win for the first time on the PGA Tour since the 2017 Masters, finishing in style:

His first win since the 2017 Masters 👏🏻 pic.twitter.com/OpPXIXKruP

Nothing produces a shocking “OHHHHH” from a gallery like a stuffed approach shot into 18. Maybe next year, my dear Mississippians (if Sergio decides to defend his title, that is).

7. Collin Morikawa’s missed short putt in a playoff at Colonial

The only thing more shocking than a stuffed approach into 18? A missed shorty, be it on the 18th or in a playoff, just like this one was for Collin Morikawa at the Charles Schwab Challenge:

And then Collin Morikawa catches a vicious paint-job, to give Daniel Berger the playoff W at Colonial…#CharlesSchwabChallenge
pic.twitter.com/JIWwj5r3ML

Morikawa’s gut-wrenching miss gave Daniel Berger the victory, and it caused golfers everywhere to have nightmares over similar short misses of their own. If this future all-time great is missing four-footers, what does that mean for the rest of us? Sorry, not to bring up a sore subject (and sorry to Morikawa for bringing this up, too). We’re not saying we missed the fans cheering this on, we missed the ensuing “oooooos” and “ahhhhs.” Without them, this miss lost some of its shock factor (don’t worry, 2020 wasn’t all bad for Morikawa).

RELATED: The rising stars you should be watching on the European Tour in 2021

6. Jon Rahm’s chip-in on the 16th hole at the Memorial

If you think this deserves to be a little higher on the list, you may have forgotten just how many crazy moments there were during the restart (we’ll get to them). That said, this was a legendary moment from Rahm, whose chip-in on the 16th at Muirfield Village was eerily similar to Tiger Woods’ chip-in on the same hole in the same tournament eight years prior. And we later came to find out that it was actually for a bogey instead of a birdie, as Rahm was given a (somewhat bogus) two-stroke penalty for his ball moving when he addressed it with his wedge. Two-stroke penalty or not, the Ohio crowd would have been going OFF when this chip dropped.

5. Matthew Wolff, Bryson DeChambeau go eagle-for-eagle on the par-5 ninth in the U.S. Open final round

FLY, EAGLES, FLY!!@matthew_wolff5 answers back with an 🦅 of his own at the 9th. #USOpen pic.twitter.com/DX04y8Bkpn

Had Wolff not fallen apart down the stretch, this could very easily have been the No. 1 moment we missed fans the most. Can you even fathom how loud the New York crowd would have been? What we really would love to know, however, is how they would have reacted to Bryson DeChambeau’s exceptional play throughout the week. They would have known about the bulk up, the awkward, cringey workout videos, the run-ins with cameramen over the summer. More than a few overserved fans would have reminded him of all of those things by shouting them at the top of their lungs. Would the fans have gotten in his head? If not, would they be firmly in Wolff’s corner? Would the Wolff eagle roar on the ninth hole have been louder? We’ll never know, which is deeply upsetting.

4. Dustin Johnson’s walk up the 18th fairway on Sunday at the Masters

Yes, we realize he was up five shots and the back nine was not what anyone would describe as “tense.” But we still missed the patrons here because they would have given Dustin Johnson all the respect he deserved for finally conquering Augusta National that week. The walk up 18, and subsequent nonstop standing ovation Johnson would have received after cleaning up his par, would have been a very special one. Few players are loved by essentially everyone in the golf world. DJ is one of those players. Hopefully he wins another green jacket with the patrons on hand some day. At least we know he’ll have as many chances as he wants.

RELATED: The long, strange, surreal year in golf, summed up in 18 quotes

3. Collin Morikawa drives the 16th green on Sunday at the PGA Championship

Credit to Frank Nobilo, he made this feel as big as he could even without a massive roar from the crowd. And that’s because it was that big, “the shot of his life,” indeed. When Morikawa looks back on it some day, we doubt he’ll give a damn that no one was there to see it. But man, it would have been that much more special if there were a bunch of people surrounding 16 green watching that laser beam find the putting surface.

If not for a very similar situation that happened later in the summer, this would have been the clear cut No. 1. Two BOMBS on the first hole of sudden death at the Workday Charity Open, between an established superstar and a soon-to-be superstar, at one of the iconic courses on the PGA Tour schedule. The scene on 18 at Muirfield Village is always electric, just not in 2020. JT’s roar provided plenty of electricity, though. Of course, he didn’t even win because golf ain’t fair.

It wasn’t a major, but Olympia Fields played like one that week and these two made it feel like one that Sunday. The only drawback here was that they didn’t go putt for putt like Morikawa-JT did, as Rahm had already finished and was warming up for a potential playoff on the range. But that wouldn’t have taken any energy out of the crowd on either putt. What more could you ask for? Two of the top three players in the world, a major championship vibe and crazy-long putts to force a playoff (DJ from 43 feet, 3 inches) and then win it (Rahm from 66 feet, 5 inches). Here’s hoping there are a lot more of these moments in 2021, and that there are golf fans there to witness them in person.

RELATED: Our 2020 Newsmakers of the Year