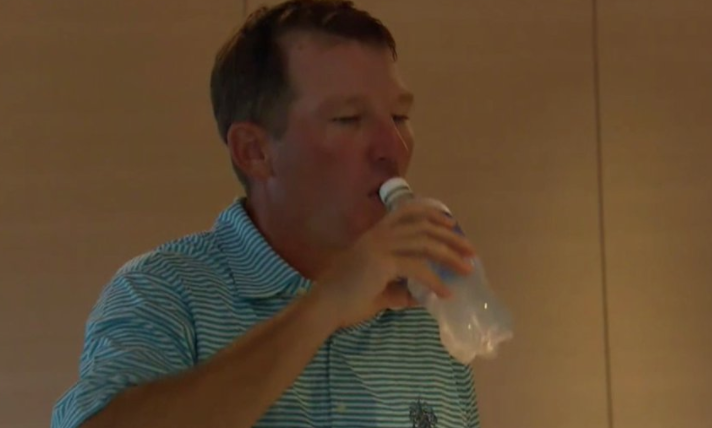 By Ryan Herrington
Jim Herman had seemingly done the hard stuff, closing out a seven-under 63 on Sunday after shooting a nine-under 61 on Saturday, to grab a one-stroke lead late at the Wyndham Championship. All that remained was to wait and see if Billy Horschel could birdie the 18th hole at Sedgefield Country Club in Greensboro and tie Herman in the clubhouse at 21 under par for the week.

Ahh, but don’t get confused. The waiting and seeing part isn’t all that easy. Not when you’re a 42-year-old whose best finish thus far in the 2019-’20 PGA Tour season was a T-27. Not when you’ve missed six cuts in your last eight starts. Not when you’re 192nd on the FedEx Cup points list entering the tournament, the longest of long shot to somehow earn enough points and sneak inside the top 125 to earn a berth in the FedEx Cup Playoffs that begin next week.

And so, as Herman, sat inside the clubhouse, his throat a little dry, there was this moment.

But really…the nerves were real 😂😂

Go ahead, laugh. It’s OK. Horschel didn’t make the putt, and Herman won, so the moment is something even the journeyman pro—now with three PGA Tour wins—will no doubt get a chuckle out of himself.