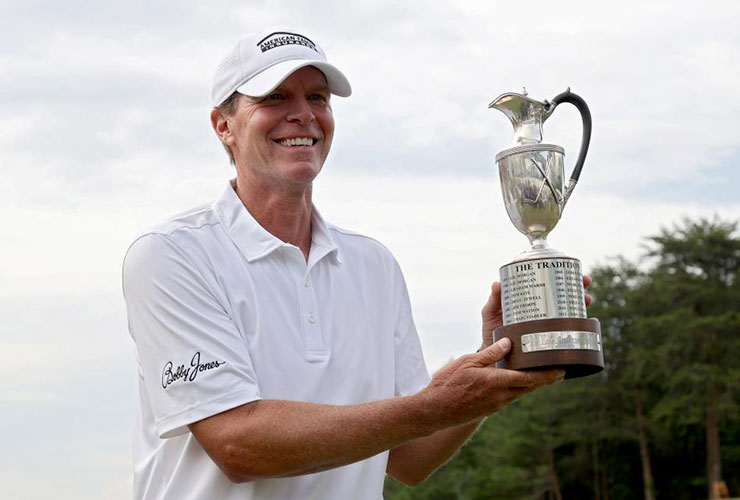 By Ryan Herrington
Two weeks ago Steve Stricker won the Regions Tradition, his fourth senior major title and eighth on the PGA Tour Champions. But he won’t be able to add to that total this week at the Senior PGA Championship.

It all seemed to be going right for Steve Stricker. Having recovered from what he labelled a mystery illness that hospitalised him twice, caused him to lose 25 pounds and forced him to step away from competitive golf for more than 200 days starting last October, the former US Ryder Cup captain had returned to action in April, posting three top-10 finishes in three starts, including a victory the Regions Tradition.

But on Tuesday, Stricker’s comeback was halted when he announced he was withdrawing from this week’s Senior PGA Championship, the season’s second senior men’s major, after testing positive last Friday for COVID-19.

Super bummed that I tested positive for Covid on Friday and have to withdraw from @seniorpgachamp this week! Just a small setback and will look forward to getting back after it when I feel strong again! Good luck to the players, especially my brother in law @MarioTiziani

Stricker’s six-shot win less than two weeks ago marked his fourth senior major title and eighth on the PGA Tour Champions to go with 12 PGA Tour wins. The Senior PGA Championship, however, was one marquee senior event that 55-year-old Wisconsin native had yet to truly contend in, finishing T-41 at Oak Hill in 2019 and T-11 at Southern Hills in 2021.

As Stricker referenced in his social media post, he still has a rooting interest in this week’s event. Mario Tiziani is in the field at Harbor Shores Golf Club in Benton Harbor, Michigan Tiziani is brother to Stricker’s wife (and sometimes caddie) Nikki as well as Stricker’s agent.