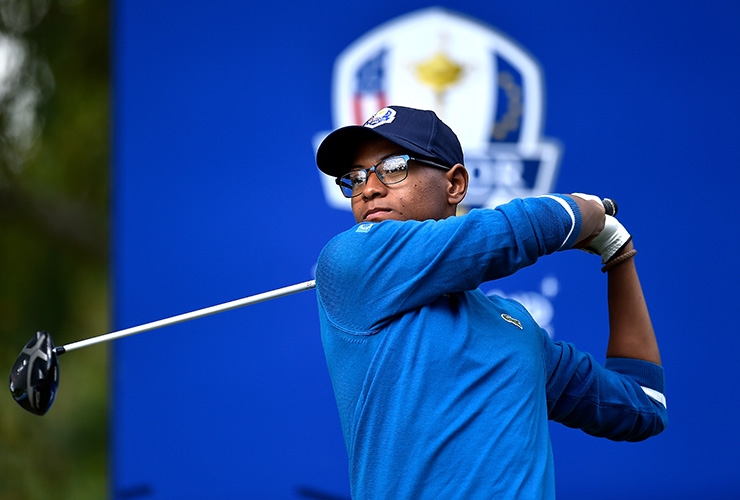 FILE:  Robin Williams of Team Europe tees off during the fourballs on day one of the 2018 Junior Ryder Cup at Disneyland Paris on September 24, 2018, in Paris, France. (Photo by Aurelien Meunier/Getty Images)

By Kent Gray
After winning his debut MENA Tour start by a record-equalling eight strokes last week, it’s hardly breaking news that  Robin ‘Tiger’ Williams has ridden into this week’s Abu Dhabi Open by Arena with oodles of confidence.

But surely Yas Links, one of the toughest tests in the Middle East and especially so when the wind puffs up off the Arabian Gulf, has given the 18-year-old English amateur pause for thought? Apparently not.

“I think the wind will play a very big factor, the same as in Jordan [but] the course is not necessarily a difficult links course in that it’s quite wide fairways, the greens are very big and undulating and it’s very soft,” Williams said.

“You can land the ball right at the flag and the drives are not really rolling anywhere. So it plays a little differently as a links course but we are right next to the coast so the wind is going to play like a links course so …you’re going to have to control your ball flight.”

The field for this week’s $US75,000 event, which was scheduled to start at 7am today with Austria’s Karl Ableidinger having the honour on the 1st tee, can’t say they haven’t been warned.

It’s not like Williams doesn’t know links golf. After growing up in South Africa, he moved to Scotland when he was eight and joined Royal Aberdeen, as he revealed to MENA Tour media manager Joy Chakravarty in this interesting tweet about how he was given the middle name Tiger. The teen also reveals his one-on-one with Woods at last year’s Ryder Cup where he teed it up for the European Juniors. Check it out:

‘I owe a lot to @TigerWoods.’@IAmRobinTiger reveals the story behind his nickname and how the 15-time major champion continuously inspires him.

Just in case Williams does need some strategic advice before his 9am tee time in the company of Englishmen James Allan and Craig Hinton, he need only seek out Luke Joy who has the penultimate 12.30pm tee time.

The Englishman, a two-time winner on tour, knows the test of the Kyle Phillips layout better than most as a Yas Links-attached player.

How do you tame a course that has consistently won accolades as one of the most strategic golf courses in the region?

We thought there was nobody better than @JoyBoy59 to ask the question. After all, @YasLinksGC has now been his home course for several years. pic.twitter.com/PFulatxlXa

After his Senior Open heroics at Royal Lytham & St. Annes, the performance of Steven Kelbrick will also be closely followed this week. The Trump Dubai amateur is off at 8.20am in the opening round of the 54-holer, 70 minutes after Journey to Jordan leader MG Keyser who will be hoping for benign early morning conditions in his 7.20am three-ball including amateur contender Curtis Knipes. 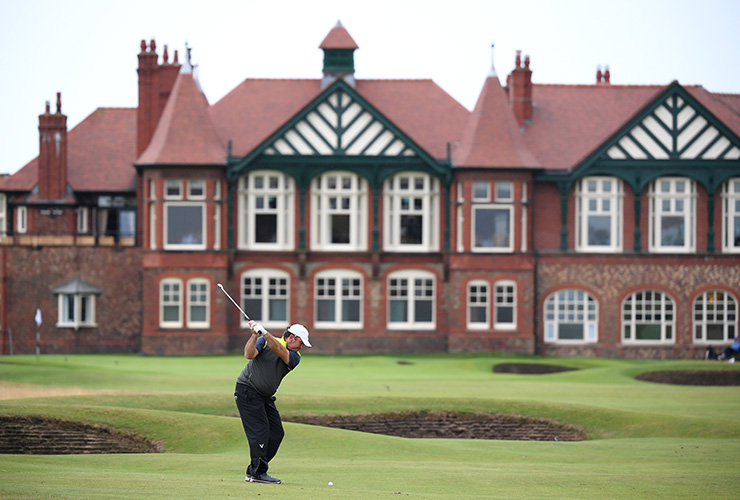 Steven Kelbrick made the cut at the Senior Open at Royal Lytham & St. Annes.
Getty Images

Like Joy, Daniel Gaunt, second to Keyser in the OOM race and the tour’s new anti-plastic bottle poster boy, will face the afternoon conditions when he tees off at noon with Englishman Max Smith and Eliott Bradley.

After missing the cut at Ayla G.C. last week, 15-year-old Josh Hill will be hoping for better things this week. The Trump Dubai member certainly seemed to be swinging it well in practice, a day that looked super busy for his father Russell, a Studio City-based osteopath now helping out on tour. Make sure to scroll to the ‘injury’ shot in Russell Hill’s Instagram post…ooch!

Zane Scotland, the tour’s most successful player and this month’s Golf Digest Middle East cover star, is out at 11.10am in the company of Americans Nicolas Wade and Ben Schlottman.

Do pick up a copy of @GolfDigestME this month. It features the most successful player in the history of our Tour – @ZaneScotland, a 10-time champion. pic.twitter.com/4lKo1hzypy