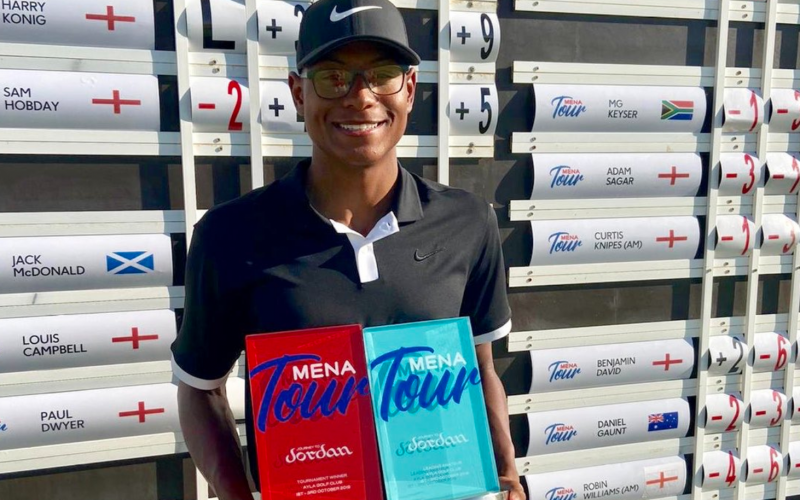 By Kent Gray
Talk about first impressions: Robin ‘Tiger’ Williams’ has captured his maiden MENA Tour title in his debut appearance by a record-equalling eight strokes. Not too shabby for an 18-year-old amateur, even given that fabled middle name he shares.

Williams’ runaway victory at the $100,000 Journey to Jordan-2 Championship on Wednesday was indeed Tiger-esque. Not only did the Peterborough player close out his final round 66 at Ayla Golf Club with five successive birdies to become just the third amateur to win on the regional Pro-Am circuit, he equalled the tour record for the biggest winning margin in a 54-hole event, set by Matthew Baldwin in the season-opening Journey to Jordan-1 event.

With rounds of 68-66-66, the Junior Ryder Cup rep gapped another English amateur, Jack Floydd, by eight shots to become the 20th player to win wire-to-wire and the 25th to win with three sub 70 scores. It was the first amateur one-two in MENA Tour history while Williams’ -16 aggregate of 200 was just three strokes outside the tour’s 54-hole record score – 197 established by MG Keyser at the Dubai Open in early March.

For the record, Keyser finished tied third at Ayla with Australian professional Daniel Gaunt. Keyser leapfrogged from third to the top of the season-long Journey to Jordan standings with the $15, 061 he and Gaunt each banked. The South African now has $39,531 in season earnings heading into the $75,000 Abu Dhabi Open by Arena starting Monday (Oct. 7-9), $5,235 ahead of now second-placed Gaunt.

In what was a memorable week for the amateurs, Curtis Knipes finished T-5, albeit 10 strokes adrift of Williams. Frustratingly for Knipes who has played six events, he has surrendered his lead atop the amateur Journey to Jordan standings to Williams who earned 18,000 points – it would have been a cheque for $18,000 if he were a professional – for his victory. Floydd is second on 15,802 points with Knipes down to third on 11,522.

Dubai-based English teen Josh Hill, who missed the cut at Ayla, is fourth but a distant 13,988 points adrift of Williams. Arjun Gupta was the best of the “Three Musketeers” – Hill, Gupta and Toby Bishop – in Ayla, finishing T-31 on four-over-par alongside Jordanian amateur Shergo Al Kurdi. Bishop also missed the 36-hole cut.

But the story of the week was clearly Williams who is set to soar from his current position of 100th in the World Amateur Golf Ranking (WAGR). His previous best was 75th. The teen is also set to enter the Official World Golf Rankings (OWGR) for the first time.

Currently without any @OWGRltd points, @IAmRobinTiger wins three precious points for his @theMENATour triumph. He should be checking in around the 1,250th place when the new rankings are released next Monday.#HigerBetterFasterStronger pic.twitter.com/jnYUC5EQZU

Much like his last week in Abu Dhabi, Lee Westwood’s preview presser ahead of the Omega Dubai Desert Classic just kept getting better and better.