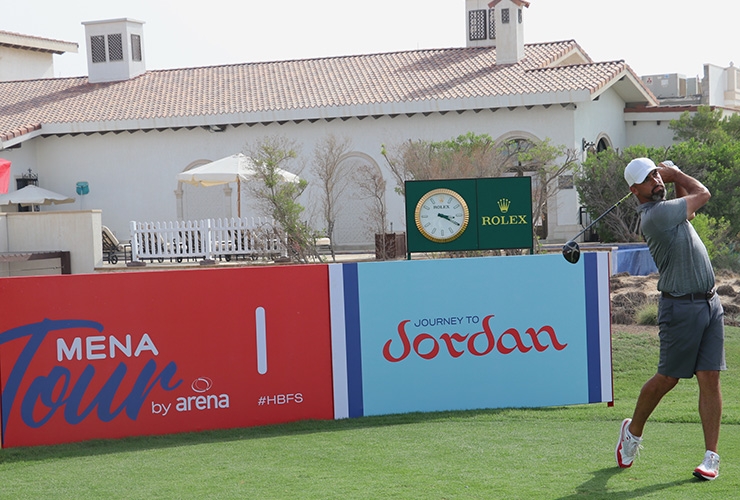 Zane Scotland, the most successful player in the history of the MENA Tour with 10 titles, in action during Sunday’s Abu Dhabi Open by Arena Pro-Am.

By Kent Gray
The MENA Tour’s bid to become the “best little mini-tour in the world” has just become a whole lot more realistic.

Arena Middle East & Asia has bolstered its sponsorship of the regional Pro-Am circuit which will now be known as the MENA Tour by Arena. The provider of turnkey structures for the “most prestigious occasions in the global calendar” – think most of the spectator and corporate hospitality infrastructure at the major Middle East golf tournaments, for example – Arena will also have the naming rights to three tournaments in the Autumn Schedule – this week’s Abu Dhabi Open at Yas Links and later in Al Ain and Ras Al Khaimah.

While no financial details of the deal were disclosed at the announcement on the eve of the Abu Dhabi Open, MENA Tour strategic advisor David Spencer insists the “umbrella sponsorship” will help the circuit’s expansion plans.

Back this year after a near 17-month restricting hiatus, the 2019 MENA Tour includes 10 events with minimum $75,000 purses and Official World Ranking Points. The number of events is expected to grow next season, enhancing the pathway to golf’s larger pro tours for the tour’s membership and helping players from across the Middle East qualify for the 2020 Olympic Games in Tokyo.

“The MENA Tour by Arena is committed to becoming the most preferred development tour in the world,” said Spencer.

“The partnership with Arena and their vision for the region makes it all possible. We are truly thankful to (Arena Middle East & Asia CEO) Paul Berger and his team for the faith that they have shown in us. [This year] we have enhanced the prize fund of each tournament, increased the playing opportunities for our members and have streamlined the schedule. There are many more plans in the pipeline but these do need corporate support.”

Arena are clearly committed to helping the circuit deliver on its player development remit.

“Golf forms a major part of our portfolio and the MENA Tour gives us a great opportunity to visit some of the leading golf courses and countries in the region,” Berger said. “Arena has been an integral part of the growth of golf in the Middle East, having provided infrastructure to almost every big tournament here since their inception. We are also very confident that our partnership with the Tour will help play a massive role in nurturing a home-grown champion very soon.”

This week’s Abu Dhabi Open is the seventh stop of the 2019 MENA Tour season which is split (by the region’s summer heat) into two five-event swings.

Ayla Golf Club in Aqaba and Jordan are official destination partners with the season-long Order of Merit (OOM), much like the European Tour’s ‘Race to Dubai’, now known as the ‘Journey To Jordan’. Ayla G.C. has already hosted a two-leg Qualifying School and two $100,000 events – including last week’s Journey To Jordan-2 Championship won so impressively by Robin ‘Tiger’ Williams. It will also host the season-ending $100,000 Tour Championship in late November.

Playing opportunities on the European, Challenge and Asian Tour’s are major lures for players from around the world. The MENA Tour announced a host of new invites just before the start of the autumn swing including starts in the 2020 Omega Dubai Desert Classic for the top two professionals and leading amateur in the final OOM race, plus to the winner of a separate ‘Final Five’ money list over the five-event autumn swing.

There is also a ‘Penultimate Four’ race – the autumn swing events excluding the Tour Championship, which will see the winner teed up to play back-to-back Asian Tour events in New Delhi (Panasonic Open India) and Bangkok (Thailand Open).