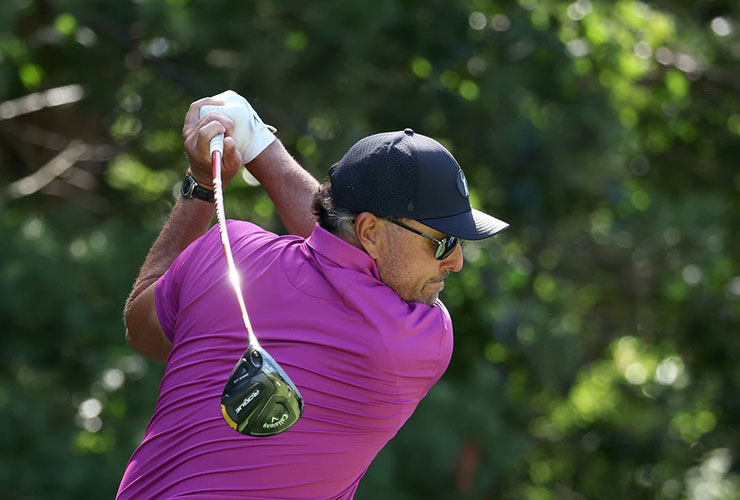 By Joel Beall
Phil Mickelson has said he is “extremely happy” that top players on the PGA Tour are seeing their input valued more as they recently influenced changes coming to the tour and its schedule. Mickelson also claimed the changes came to fruition thanks to the leverage created by LIV Golf.

In interviews published earlier this year with Golf Digest and the Fire Pit Collective, Mickelson stated his belief that the lone conduit to enable player-friendly alterations to the PGA Tour was through presenting an alternative for players to turn to.

Mickelson’s words weren’t necessarily wrong, as the PGA Tour’s unveiling of more elevated events and infusion of more money for top players through the Player Impact Programme announced last week at the Tour Championship were widely seen as a response to LIV Golf’s emergence.

Speaking to Morning Read’s Bob Harig, Mickelson said he didn’t feel vindicated by the changes. “I would say I’m generally happy that the top players who are really driving the tour and creating the interest are being listened to,” Mickelson said. “And what they are doing for the tour is being valued now. I’m happy to see that happen.’’

Conversely, when asked his thoughts on LIV’s viability had these changes been instituted earlier, Mickelson dismissed the notion.

“It was stated very clearly that nothing was going to happen,” Mickelson said. “Unless there was leverage, nothing was going to change. And all players should be appreciative of what LIV is doing. The players on LIV for the opportunity they are getting. And the PGA Tour for the leverage that was provided to get these changes done.’’

Asked if he ever considered a players-only meeting like the one that Rory McIlroy and Tiger Woods helped lead at last month’s BMW Championship, which ultimately spurred the schedule modifications, Mickelson reiterated: “I don’t think anything like that would have happened without the leverage that LIV Golf has provided. There was no leverage. There were no other options.’’

Mickelson said he understood some of the pushback to his decision to join LIV, saying that the organisation is “disruptive” and backlash inherently comes with the territory. However, he does not subscribe to the idea that his decision will harm his legacy, saying his legacy is currently being built at LIV. Moreover, Mickelson said he expects LIV to receive World Ranking points, and that if LIV doesn’t, it undermines the OWGR system. Mickelson also expects LIV players to be competing at major championships and said he is planning to be at Augusta National for next year’s Masters, which he missed this season.

“I believe wholeheartedly I’ll be at Augusta. I thought my conversations with [Masters chairman] Fred Ridley — which I will keep between us — were extremely classy,” Mickelson said. “I have the utmost respect for him and the leaders of the majors. There’s been to date no threat at all. I’m not saying that couldn’t change. I just don’t see how that could benefit anybody. I believe they are wise enough and great leaders who can see that.”

Mickelson is playing in this week’s LIV Golf event outside of Boston.