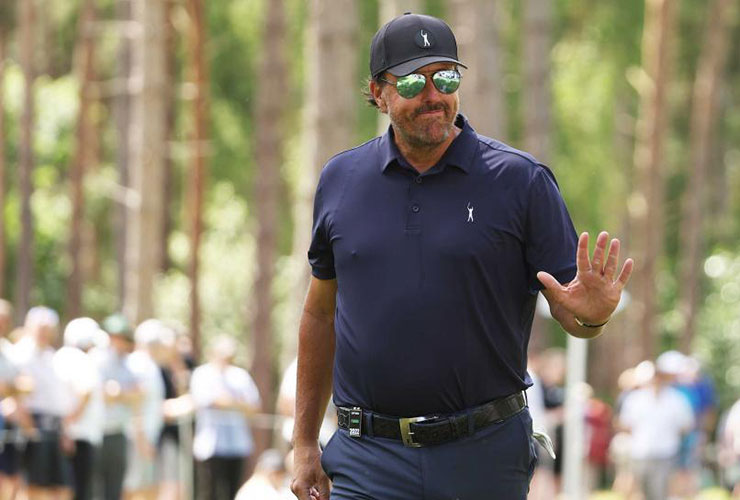 By Joel Beall
Phil Mickelson has been mostly quiet on social media since the fallout from his controversial statements and involvement with LIV Golf. But the 52-year-old remains on Twitter, and on Tuesday attempted to defend himself from one of those previous remarks against comments made by Tiger Woods at the Hero World Challenge.

For a quick rewind, last autumn Mickelson claimed the tour was withholding money, money Mickelson believed should be distributed to the players. “The Tour is sitting on multiple billions of dollars worth of NFTs,” Mickelson said. “They are sitting on hundreds of millions of dollars worth of digital content we could be using for our social media feeds. The players need to own all of that. We played those shots, we created those moments, we should be the ones to profit. The Tour doesn’t need that money. They are already sitting on an $800 million cash stockpile. How do you think they’re funding the PIP? Or investing $200 million in the European Tour? The Tour is supposed to be a non-profit that distributes money to charity. How is it legal for them to have that much cash on hand? The answer is, it’s not. But they always want more and more. They have to control everything. Their ego won’t allow them to make the concessions they need to.”

The issue resurfaced on Tuesday when Woods was asked, in wake of the sweeping changes implemented by the PGA Tour in August, if Mickelson was owed an apology by any of his former tour peers. The question could not be finished before Woods responded: “No, absolutely not, no.”

However, Woods continued that the tour had to take out an enormous loan due to the pandemic to sustain operations. This is not true, as tour officials later clarified according to SI’s Bob Harig, believing Woods was referencing the potential fallout had the tour not returned in June 2020 from its COVID break.

For what it’s worth, when PGA Tour commissioner Jay Monahan was asked about this subject in March, Monahan responded that the reserves were the very reason the tour was able to sustain the problems brought by the pandemic. “The PGA Tour reserves are $225 million. They were at a high watermark — about $300 million — prior to Covid,” Monahan said. “We think that’s a reasonable range to keep our reserves in, in the event of any event like we’ve experienced the last couple years. You just don’t know.”

Mickelson is currently suspended by the PGA Tour due to his participation in LIV Golf. Though Mickelson initially filed an antitrust lawsuit against the tour, his name is no longer on the claim.