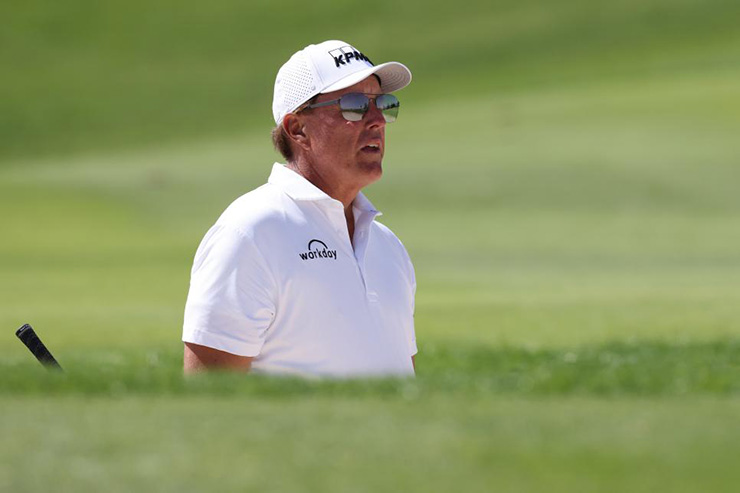 By Tod Leonard
Phil Mickelson has been out of the public eye since early February after his controversial comments about the Saudi-backed golf league were published. That doesn’t mean that he’s been isolated and out of touch.

Seth Waugh, the CEO of the PGA of America, said on the “5 Clubs Conversation” podcast this week that he’s had a “number” of talks with Mickelson over the last several weeks and that they will continue to do so as Mickelson’s possible defence of the PGA Championship title approaches in less than two weeks at Southern Hills in Tulsa. Mickelson is registered to play in the PGA, but has not yet said if he’s going to compete.

It’s been often speculated of late about what Mickelson’s return to golf might look like from a media standpoint. If he decides to play in the PGA, would he conduct an interview with a handpicked entity away from the tournament, or simply face what figures to be a charged atmosphere in a press conference early in the week? He and Waugh have clearly talked about that.

“I hope what we can do is have that before the flag goes up,” Waugh said. “The idea is, if he does play, and if he’s able to and allowed to … he would certainly have to face the media. But I hope it’s Monday or Tuesday, and then once the flag goes up, it’s about the golf. … What we’re trying to do is deliver a major championship, not a circus. And so I would hope that he can avoid that, and everybody can avoid that. And we’re talking about golf shots instead of verbal gaffes once we get going.

“But there’s certainly, I think, part of his thinking is, ‘Am I ready to face that glare and have that conversation and have all the answers that everybody is going to be looking for? And if I do it that week, am I then able to compete on a major championship venue under that kind of pressure with everything going on?’ But we would do everything we could to make it happen either before our week or very early in the week.

.@Garywilliams1Up & @PGA CEO Seth Waugh discussed a lot of topics this week, including if their defending champ, @PhilMickelson, will be at Southern Hills and how to they hope the focus can be on the golf.

On a personal level, Waugh expressed his sadness at the situation. Mickelson has admitted to working with the Saudis and Greg Norman to get the LIV Golf Invitational Series off the ground as a competitor to the PGA Tour. But he then complicated the situation with his incendiary comments about the Saudi government’s human rights history. Mickelson followed up with a statement that called the comments “reckless,” while saying he would be stepping away from the game. “I offended people, and I am deeply sorry for my choice of words,” Mickelson wrote. “I’m beyond disappointed and will make every effort to self-reflect and learn from this.”