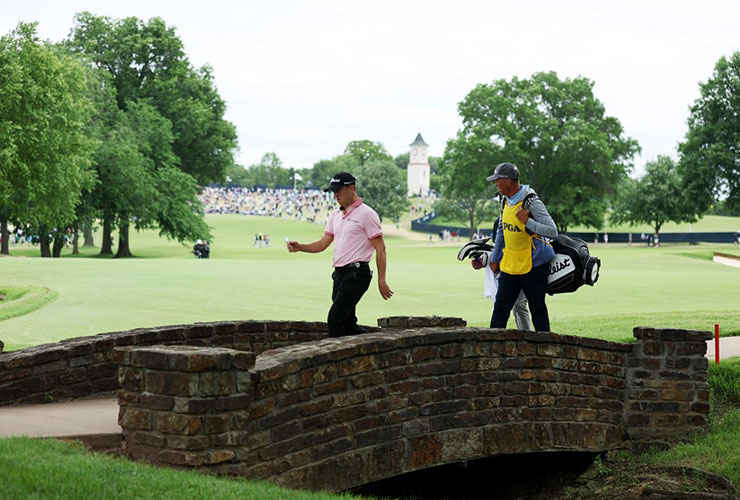 By E Michael Johnson
It seemed implausible, if not impossible that Justin Thomas would win his second PGA Championship. Starting the day seven shots in arrears, Thomas spent the bulk of the day not even on the first page of the leaderboard. But the 2017 PGA champ kept chipping away, playing the final nine holes in 32 to give him a final-round 67, and eventually, a playoff with Will Zalatoris after Mito Pereira knocked his tee shot in the water on 18 and made double bogey.

On the first playoff hole Thomas used his Titleist Vokey WedgeWorks 60-degree wedge to stuff an approach close enough to roll in a birdie to saw off Zalatoris’ birdie on the par-5 13th. Then on the second hole, JT unleashed a bomb with his 15-degrees Titleist TS3 3-wood that carried 288 yards and landed just in front of the green on the short, par-4 17th before bounding onto the green, leading to another birdie that thrust him into the lead. A final hole par sealed the win.

Although not in the limelight until late on the final nine, Thomas got back in it with a one-two punch at the 11th and 12th holes, knocking the ball in from 64 feet at 11 and following it up with a 18-footer for birdie on the following him. A solid up-and-down birdie at the short par-4 17th put him in just enough position when Pereira faltered.

Thomas’ putting was key to his game all week. Thomas switched to a new Scotty Cameron by Titleist Phantom X 5 Knuckle Neck prototype mallet just this week. Thomas had the putter at his Florida home and practiced with it during his time off. Although it is similar in shape to the putter he put in the bag at last year’s Open Championship in appearance, there are differences.

The neck configuration also is new. “The neck in the new putter helps with his face closure and provides stability,” said Page. “He went away from the smaller slant neck and feels like he is seeing his start lines better, which in turn, gives him more confidence.”

Apparently so as Thomas was second in strokes gained/putting at Southern Hills, gaining 6.323 strokes on the field.

Thomas’ iron play also was on target as he ranked second in the field greens in regulation at 69.44 per cent with his 621.JT custom muscle-back blade irons with Dynamic Gold Tour Issue X100 shafts and Golf Pride Tour Velvet cord grips. Thomas first put the irons in play at the CJ Cup in October but has been partial to muscle-backs for some time. Titleist PGA Tour rep JJ Van Wezenbeeck explained why to Golf Digest last year.

“These guys are playing green speeds, green firmness and pin positions that golfers who play on the weekend don’t face,” says Van Wezenbeeck. “For a player like Justin Thomas to use the slopes and contours of the green when they have 7-iron or less into the hole, he’s really having to shape the golf ball into that spot and using a muscle-back blade iron really helps him do that while helping him control his vertical flight as well.”

Or enough control to win his second major championship.