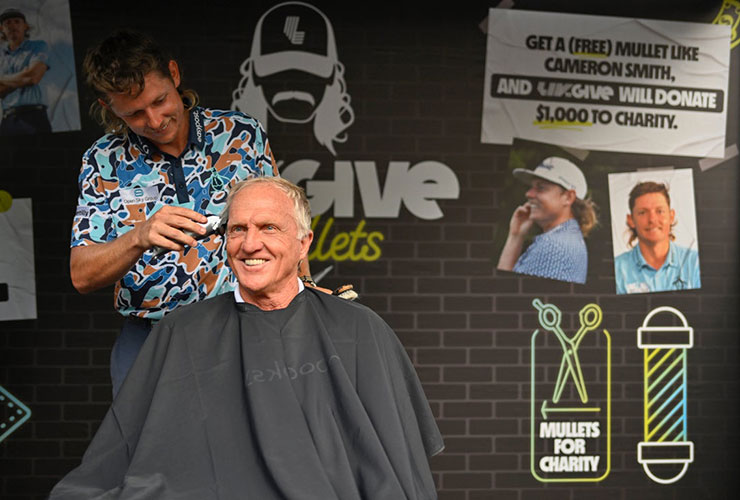 Mike McAllister, Contributing Writer
Jake from Ann Arbor, Michigan, seemed like the perfect candidate for a free mullet on Saturday. His hair already cascading below his shoulders, all he needed was some work on the sides, maybe a trim in the back.

Still, he was hesitant.

For two-and-a-half years, he’s been growing out his hair in order to donate it for charity back home. Now, he was confronted with another option.

At this week’s LIV Golf Invitational Chicago, there is a pop-up barbershop booth in the Fan Village in which courageous fans can receive a free mullet from a hair stylist. For every mullet cut, LIV Golf will donate $1,000 to charity through its LIV to Give initiative. By Saturday night, nearly 50 mullets had been cut, meaning close to $50,000 in donations.

Jake was glad to hear about the charity component. Even so, he had one other factor to consider before sliding into the barber’s chair. His sister Katherine is a professional hair stylist. She’s the only one who touches his hair.

But encouraged by his friends and others hanging around the booth, Jake finally decided to go for it. He figures double-dipping on the charity aspect is a good thing. “Whatever’s left, I’m still going to donate it back home,” he said.

And his sister? “Well,” Jake said with a slight smile, “she’ll probably murder me tomorrow.”

Making his second LIV Golf start this week, the reigning Open Champion is the inspiration for the unique charity initiative. His success, style of play and engaging Australian personality have made mullets fashionable.

During Friday’s first round at Rich Harvest Farms, Smith noticed an increase in mullets being worn by members of his gallery.

“It was good to see a few guys getting clipped, and obviously a good cause for charity,” Smith said.

Standing next to Smith was Phil Mickelson, who was then asked about his views on the mullet look. Mickelson, of course, is never shy of opinions.

“I think it looks amazingly attractive,” he deadpanned.

On Saturday, after shooting a four-under 68 to take a two-stroke lead, Smith made a visit to the pop-up barbershop. He didn’t need a mullet, of course, but he knew somebody who did — LIV Golf Commissioner and CEO Greg Norman. And guess who would make the first few cuts?

Smith eagerly took the shears and worked carefully along the sides, displaying the kind of deft touch usually found when he has a wedge or putter in hand. Eventually, he gave way to the expert barbers at Idle Hand Collective, who finished the job on the commissioner.

Smith wanted his fellow Aussie to have the perfect cut. After all, he knows the value of a good-looking mullet. “I feel like this is my good luck charm,” he said.

Two fans hoping to tap into that luck on Saturday were Owen and Thor. They were part of a group of five friends from Minnesota, a very mullet-friendly state. In fact, a Minneapolis-based junior hockey team is named the Minnesota Mullets.

Even before walking through the gates at Rich Harvest Farms, Owen and Thor knew about the charity drive, having heard about it while researching the various course activities. It was haircuts full steam ahead.

“You kidding me? A free mullet? That’s hard to turn down,” Thor said.

“I actually shaved my head bald a couple of years ago,” added Owen. “So mullets are easy for me. And it’s for charity.”

Both are huge Smith fans.

“I actually bet on him on Saturday night to win The Open and it paid off big for me,” Owen said, “so he’s earned my trust ever since.”

As for once-hesitant Jake, he’s left-handed, so he likes cheering for Mickelson. But that didn’t keep him from taking a seat in the barber’s chair. His reasoning was pretty simple.

You may also like:
Golf Digest Middle East presents Oktoberfest 2022
Cam turns on the style at LIV Golf Chicago
Dustin delivers once more on LIV Golf
Rory to face LIV Golfers at Dunhill Links Championship
Mickelson ponders withdrawing from PGA Tour lawsuit
Stenson comes out swinging in Chicago after Boston scare
DeChambeau unhappy with  Presidents Cup omission
Rickie Fowler ready for a new challenge on PGA Tour
Zalatoris explains why he did not chase the LIV cash
Who will be the Aces in the pack at LIV Golf Chicago?
Cam Smith has Aussies punching hard on LIV Golf tour
WSJ examines Monahan’s use of PGA Tour jet
All you need to know ahead of PGA Tour season
Van Dam aims for double impact in New York
Team Europe should fancy Ryder Cup chances
DP World Tour Championship set for a week of fun
Meet Carl Yuan, your favourite golfer you don’t know yet
Puig prepares for life as a pro in Chicago
Dubai Desert Classic set for January return — without Slync
Get your FREE September edition of Golf Digest Middle East here