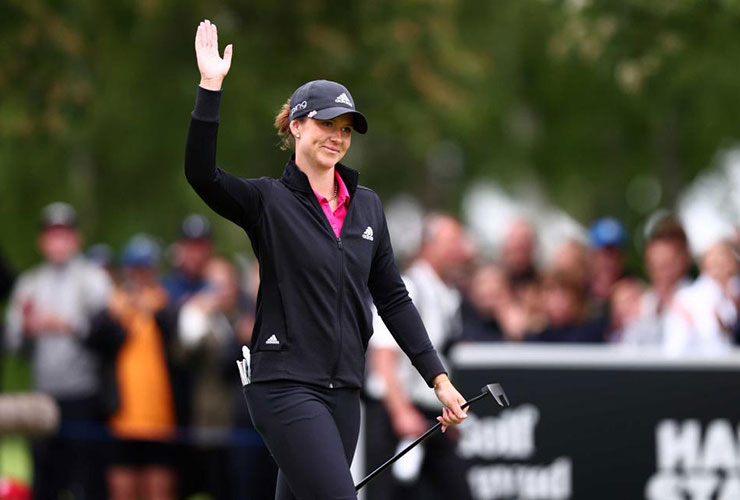 By Ryan Herrington
She started the day two shots out front and made a point of not looking at the leaderboards. If Linn Grant was going to make history on a rainy Sunday at Halmstad and become the first woman to win a DP World Tour event, she didn’t need to put any additional pressure on herself during the final round. The 22-year-old Swede was playing in front from of a home crowd (she lives an hour away), which worked to her advantage with the encouraging cheers, and her boyfriend, Pontus Samuelson, was on her bag, helping her calm her nerves.

On the 13th green, Grant gave in to curiosity. She had made seven birdies and needed to know where things stood.

“I thought maybe three or four ahead, and then when I saw eight I was like I can just breathe out a little bit and just go on and do my thing.”

Breathe, do her thing and soak up the amazing accomplishment. She’d make one more birdie on the 14th hole, cruising to an impressive eight-under 64 and a 24-under 264 total to win the Scandinavian Mixed by nine shots over a pair of notable DP World Tour veterans Henrik Stenson and Marc Warren.

The moment Linn Grant put herself in the history books 🏆#VolvoScandinavianMixed pic.twitter.com/TWGVXNlCpM

It also counts as a win on the Ladies European Tour, which co-sanctioned the event that pitted a field of 78 men and 78 women, playing from two sets of tees but in a single tournament for a $2 million overall purse.

Grant, a former All-American at Arizona State turned pro in in 2021 and has already found success on the LET, winning three times in six starts in 2022. She earned a €300,000 for the victory.

Among the notable men she defeated after making 24 birdies and an eagle during the four days were Alex Noren, John Catlin and Edoardo Molinari.

“I just hope that people recognise women’s golf, more sponsors go to the LET and hopefully this pumps up the women’s game a little bit more,” Grant said, the next closest woman (Gabriella Crowley) finishing 14 shots back.

The nine-shot win is the biggest margin of victory on the DP World Tour in 2022. That Grant can claim this distinction made the accomplish all the more satisfying.

“It’s a nice feeling. All week I just felt like it’s the girls against the guys and whoever picks up that trophy represents the field.”