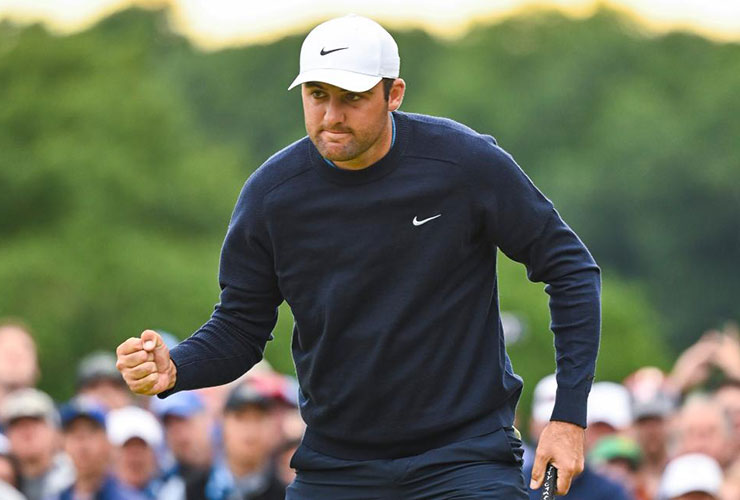 By Jay Coffin
Scottie Scheffler and Will Zalatoris. Both tied for second place at the US Open behind Matt Fitzpatrick and both have made major headlines this year on the PGA Tour, although Scheffler has made them for winning and Zalatoris has made them for only coming painfully close.

The duo each took home $1,557,687 for their consolation prize on Sunday at The Country Club and that total pushed each to different earnings records for a season on the PGA Tour.

Scheffler has now collected $12,869,894, which is a new record for earnings in a PGA Tour season. He’s won four times — Phoenix, Bay Hill, Match Play, Masters — and also has second-place finishes at the Charles Schwab Challenge and the Houston Open to go along with the performance in Brookline. Jordan Spieth held the previous mark in earnings with $12,030,465 in the 2014-15 season when he won two majors and five times overall.

And it’s only June, with several big events remaining, including the Open Championship and the three FedEx Cup Playoff events.

As for Zalatoris, he’s earned $6,441,437, which is the most money ever earned in a PGA Tour season without winning. He’s now up to 12th in the World Ranking and has seven top-six finishes just this year. Among those, of course, is the second-place tie at the US Open, the playoff loss to Justin Thomas at the PGA Championship, a second-place finish at the Farmers Insurance Open and a sixth-place tie at the Masters.

You may also like:
18 parting thoughts from the US Open
Can you guess the top 10 US Open earners?
Report: Ancer is the latest LIV Golf recruit
The US Open golf needed
Fitzpatrick became a major champion by turning his shortcomings into strengths
Phil admits he wasn’t ready
Watch that leader Morikawa
US Open Day 1 wrap
Rory produces strong start
Meet the US Open amateur hopefuls
US Open: A par 5 unlike any other
The Gulf Club: Latest golf news from UAE
A major record at US Open in prize money
Has the US Open become too one-dimensional?
All you need to know about the US Open
DP World Tour denies Pelley attended LIV Golf
Rory on his LIV Golf miscalculation
Decision time for DP World Tour