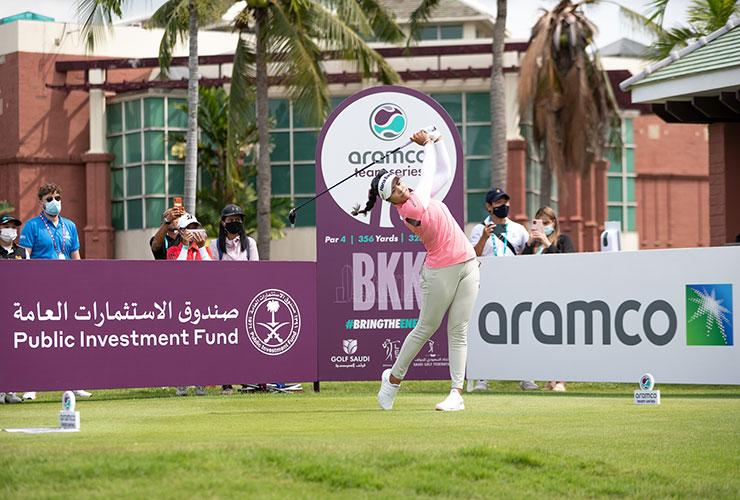 By Matt Smith
Local hope Patty Tavatanakit felt right at home in Thailand on Thursday as she lead the $1 million Aramco Team Series — Bangkok by one shot after an opening-round six-under at Thai Country Club.

The world No. 13 made the most of home advantage to finish one above Spanish starlet Ana Pelaez going into Friday’s second round.

Team Hillier, captained by Australia’s Whitney Hillier and featuring Chonlada Chayanun — playing her home course — Krista Bakker of Finland, and amateur Pattanan Amatanon lead at the halfway point in the tournament’s fourball format, after carding a day’s low of 16-under.

“It was really fun,” said Tavatanakit, the 2021 LPGA Rookie of the Year. “I kept my round going well. The team format is a little different. Being able to play with everyone at the same time and make birdies, cheering them on, it’s a really good feeling.

“It’s a format that relaxes you. I was really calm today and I felt like mistakes were fine, because I had other people there [to support] as well.” 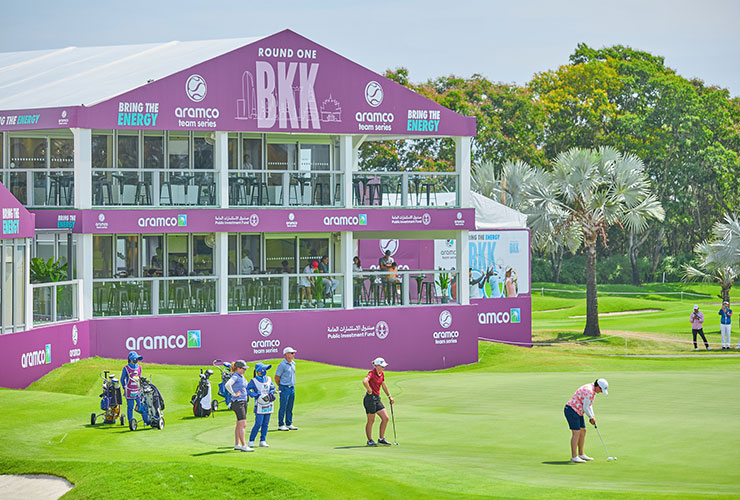 Instead of opting for the player hotel, Tavatanakit is staying with her family in Bangkok this week — and has a friend from home, Dan, on her bag.

Asked if being one of the hometown heroes brought with it an extra level of playing pressure, the 22-year-old added: “I want to do well everywhere I play. I treat every week just like a normal event regardless of where I am, so I’m just here to play another tournament.

“Today, I read the greens really well. I was surprised actually that I didn’t really get more right reads or right breaks on the practice rounds, but today I think I was a little bit more focused and Dan really helped me.”

Breakout Spanish star Pelaez sits one back after a quite remarkable opening day bogey-free 67.

The 24-year-old only arrived in the Thai capital on Tuesday night after securing a late entry to the $1 million event following her shock six-stroke victory at the Madrid Ladies Open.

With storms delaying her Wednesday’s afternoon practice, Pelaez — who drove for five hours, then took three flights over 24 hours to reach Bangkok — arrived at Thai Country Club in the morning.

She used Google Earth to learn about the course, before going out for a birdie-birdie-birdie finish in here five-under.

“Honestly, I’m actually speechless,” said Pelaez. “I had a great round. I had a lot of fun. I had to be patient because I started par, par, par, birdie, par, birdie — then I didn’t get another birdie until hole 16. And then I finished with three in a row, so I’m extremely happy. A boost of confidence for tomorrow actually.

“I’m just happy we were able to get everything in place and that I’m here. I cannot believe I’m actually awake after traveling so much and all the emotions. I should be wasted, but I’m good.”

Team Hillier hold their own one-shot advantage going into what will be the closing day of the Aramco Team Series — Bangkok’s $500,000 team competition.

Their 16-under total was enough to give them a slender advantage heading into Friday’s deciding final round.

“We just made birdies early,” said Australian Whitney, who is half-Thai. “We had a good vibe and everyone was gelling pretty well – everyone was laughing and happy. So, yeah, good team. We played well.”

Team Magdalena Simmermacher (Charlotte Liautier, Isabella Deilert and amateur Sirapob Yapala) sit on 15-under, one ahead of the teams captained by Scotland’s Kylie Henry and Patty Tavatanakit.