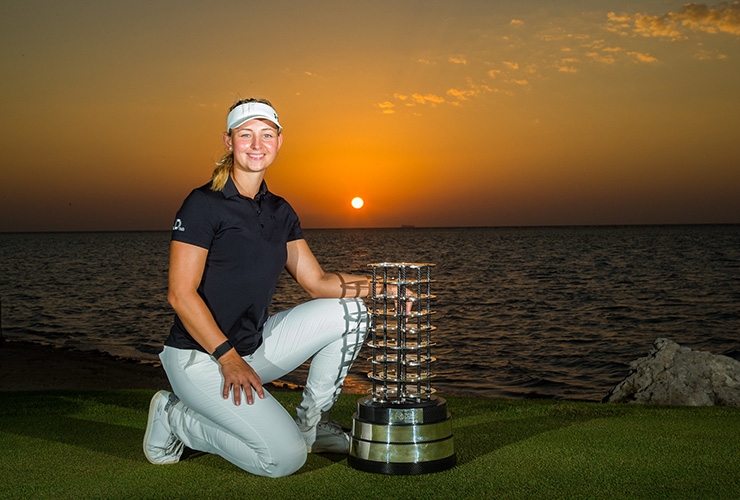 By Kent Gray
With a blow of her three wood that might yet go down as the shot of her career and a delicate pitch in overtime that was nearly as impressive, Emily Kristine Pedersen turned the year most of us want to forget into a year she’ll forever savour.

The 24-year-old Dane was the epitome of clutch down the stretch before edging England’s Georgia Hall at the first hole of a sudden-death playoff to capture the inaugural Aramco Saudi Ladies International at Royal Greens Golf & Country Club on Sunday.

Pedersen’s win secured a €127,170 payday – the largest winner’s cheque outside the majors – and extended her lead in the LET’s season-long Race to Costa Del Sol to an almost unassailable 392 points over Swede Julia Engstrom.

Just two events remain – the new Saudi Ladies Team International starting Tuesday at Royal Greens and the Andalucia Open de Espana from Nov. 26 – but for now Pedersen will bask in the glory of second win of 2020 after her Czech Ladies Open victory in August.

“I’m so happy to be the first winner of this event,” said Pedersen. “It’s been such a fantastic experience to be here in Saudi Arabia with all the players here.”

Sunday started as essentially a three-player shootout by Lydia Hall’s challenge evaporated with a triple bogey on 14 en-route to a closing 76 and a share of 6th.

It came down to Pedersen and Hall. Hall lead by two with five to play but Pedersen kept on plugging away and made it into the clubhouse at -10 courtesy of a brilliant three wood to the back of the par-5 18th and a two-putt birdie. 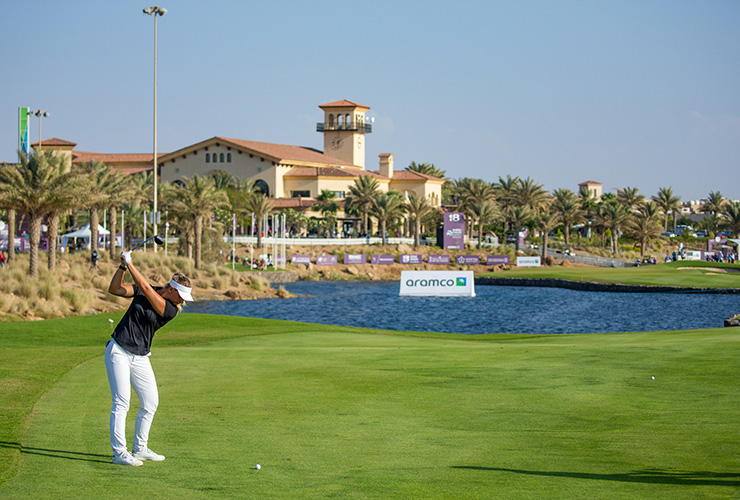 Hall had her own birdie attempt on the 72nd hole to win outright but the putt stayed right of the cup to force a playoff.

With Pedersen pin high in two shots on the second time down 18, Hall had laid up looking to birdie the hole with a close iron strike. But the 2018 British Open champion didn’t catch it flush and watched her title hopes sink as her third found water en-route to a bogey six.

Pedersen still had work to do with water lurking beyond the green but she hit her pitch perfectly to give herself two putts for victory. She needed only one to win the playoff with a birdie.

“It was really good,” was Pedersen’s understatement when asked about her three-wood in the final hole of regulation play. “After hitting it I said to my caddie Mikey that it felt great. I knew I had to make a birdie and I just kind of felt the shot to take on.

“It was one of the best shots I’ve ever hit, because it put me in that position, and I ended up winning in the play-off.”

You can check out Pederson’s classy shot and the final round highlights here:

Hall was typically classy in defeat.

“Emily hit an amazing shot on the last hole in regulation and it was very brave. I am really pleased for her as she’s a really nice girl,” she said.

“I played well today even though it was certainly windier than yesterday. It was just a shame my putt on 18 [the 72nd hole] didn’t go in.” 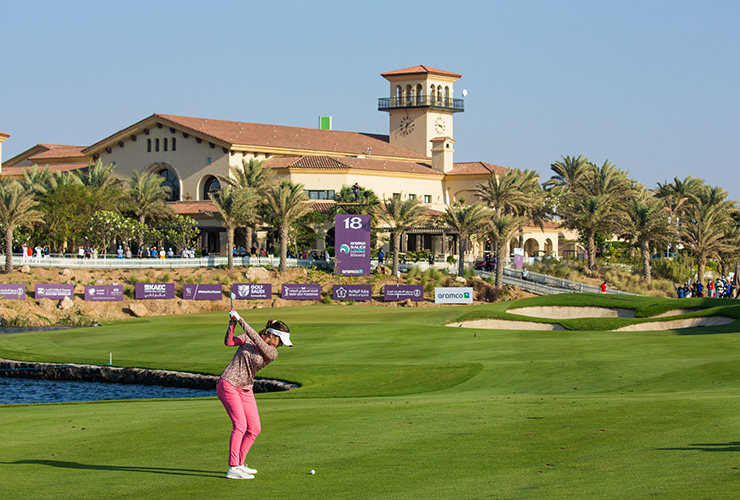 Georgia Hall hits into 18 during the final round at Royal Greens GCC.

Solheim Cup teammates Ann Van Dam (-8) and Caroline Hedwall (-7) showed their class on Sunday to finish in third and fourth respectively after impressive final rounds in the 60s. It was Hedwell’s second successive 3rd placing after she led going into the final round of the OMEGA Dubai Moonlight Classic at Emirates Golf Club last week.

Aussie Stephanie Kyiacou, who started 2020 by winning the Ladies Classic Bonville as an amateur, finished T-4 with Van Dam to move up to fourth in the Race to Costa Del Sol rankings.

Sunday’s low round was recorded by Switzerland’s Morgane Metraux, whose stunning run of nine birdies in 16 holes – following a triple-bogey on the second – led her to a 67.

While the green jacket is Dustin Johnson’s to lose at Augusta National, the new LET event competing for global attention 11,284km away in King Abdullah Economic City near Jeddah is a much tighter affair heading into Sunday.